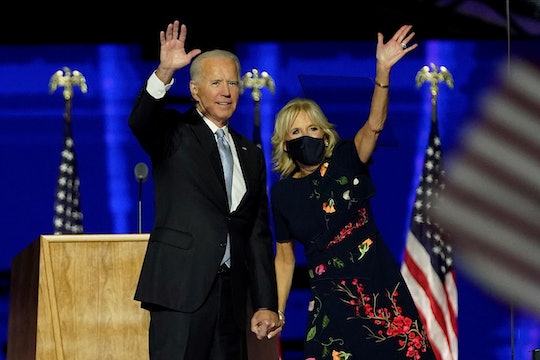 The sweet German shepherds are moving in after four long years without any pups in the White House.

Not only does President-elect Joe Biden’s victory mean that we'll be getting in a new president come January 2021, it also means that after four long years dogs will finally be living in the White House again. To prepare yourself for what's to come, please enjoy a few sweet photos of Joe Biden’s dogs, Champ and Major.

The president-elect and wife, Dr. Jill Biden are the proud parents to two German shepherds. Pets have been a longtime staple in the White House, often providing some extra companionship to the commander-in-chief. And Champ and Major will surely do just that.

Champ has been with the Biden family since December 2008, according to TODAY, after Dr. Biden promised her husband that she would get him a dog if he and President Barack Obama won, according to Reuters. And when they did, Biden picked out Champ from a Pennsylvania based breeder at the time, according to Politico, and was named by Biden’s grandchildren.

Major is a more recent addition to the Biden family. The German shepherd was adopted by the Bidens from the Delaware Humane Society in 2018 after they had initially fostered him. This makes Major the first rescue dog to live in the White House, according to NBC News. Biden has been a longtime fan of German shepherds. In 2008, the then-vice president-elect told ABC News that he has a special connection to the breed. “I’ve actually trained them and shown them in the past, my past life,” he said. “So I wanted a German shepherd, and we’re going to get a pound dog that my wife wants.”

So before Champ and Major make their big move to D.C., let's get ourselves acquainted with our future First Dogs.

Getting the perfect photo with pups is not easy and the Bidens know this to be true. In the president-elect's photo celebrating International Dog Day last year, Champ was a little more focused on his toy than the camera.

Biden’s granddaughter, Naomi, tweeted a photo of Champ and Major having a little too much fun with a dog toy that looks a lot like President Trump.

They Celebrate The Holidays

These pups know how to celebrate. Earlier this year, Dr. Biden tweeted a photo of the adorable dogs hanging out on the grass on Easter with some colorful eggs, of course.

And look at how excited they were to celebrate Christmas.

Champ and Major have been featured in Dr. Biden's posts throughout the presidential campaign — including this tweet from March where she thanked first responders.

They Support Their Parents

They’re super supportive of their parents’ relationship. Just look at how they posed with this sweet chalk drawing in February.

When they’re not being camera shy or playing with toys, they’re also great at posing for the camera. This photo of Champ and Major, tweeted on National Dog Day this past August, shows that they really know how to give the camera some serious face.

I mean, come on. That is one photogenic pup.

They’re Ready To Be In The White House

In a November Instagram post, Joe wrote that he is ready to move the whole family into their new home. “Let’s bring dogs back to the White House,” he wrote captioned the post.

In a hilarious video posted to Instagram, Biden revealed that his dogs provide some serious relief in his life. “No ruff days when I have some Major motivation,” he captioned the post.

They Have A Lot Of Energy

If you always see Major walking around, don’t be alarmed. Biden revealed on Instagram that the pup is always on the go. “This is one of the rare times we’ve gotten him to sit still,” he wrote.

They’re His Friends For Life