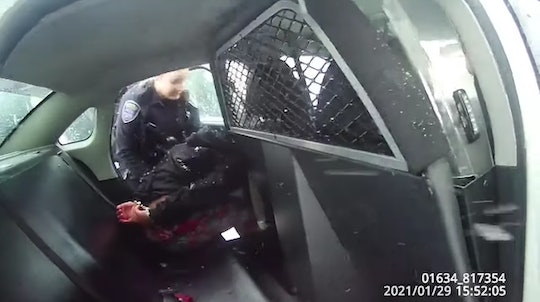 "You're acting like a child," one officer told the girl before she was sprayed with the chemical irritant. "I am a child," she responded.

Law enforcement officials in Rochester, New York, have come under intense criticism and public scrutiny after police officers pepper-sprayed a 9-year-old girl while she was in handcuffs and experiencing a mental health crisis. Bodycam footage of the incident, which occurred Friday, showed multiple officers forcibly restraining the child before attempting to place her in the backseat of a police car. When the girl repeatedly refused to put her legs inside the vehicle, officers pepper sprayed her as she cried out for her father. City officials have joined members of the public in condemning how officers handled the situation.

"I am very concerned about how this young girl was handled by our police department," Rochester Mayor Lovely Warren told reporters Sunday at a joint press conference. "It is clear from the video that we need to do more in supporting our children and families... This is not something that any of us should want to justify, can justify, and is something we have to change. It is not an option."

Bodycam footage shared Sunday by the Rochester Police Department — in two separate videos— begins with one officer chasing down the child in question and repeatedly asking her to tell him what happened between her and her mother. After a confrontation breaks out between the child and her daughter, the officer begins walking the child toward other responding officers. When the young girl refuses to sit inside a police vehicle and attempts to break away, officers place her in handcuffs and attempt to forcibly maneuver her inside the car.

"I want my dad," the girl screams at one point. "I'm not getting in no car until I see my dad."

"You're acting like a child," one officer can be heard telling the 9-year-old.

As officers struggle to place the girl inside a police vehicle she requests "a girl officer," who appears to help the handcuffed child maneuver into the vehicle. When the girl refuses to pull her legs inside the vehicle, officers threaten her with pepper spray. "I'm going to pepper spray you and I don't want to," the female officer says. "This is your last chance otherwise pepper spray is going in your eyeballs."

Executive Deputy Chief Andre Anderson told reporters Sunday that officers were responding to reports of a "family trouble" when they were told the 9-year-old girl was attempting to run away after having indicated she was suicidal and wanted to kill herself and her mom. Following Friday's incident, the child was taken to a local hospital for treatment under New York's mental hygiene law. She has since been released.

On Sunday, Mayor Warren called on the city's law enforcement officers to respond to all calls with compassion and empathy. "I have a 10-year-old daughter. So she's a child; she's a baby. And I can tell you that this video, as a mother, is not anything that you want to see. It's not," Warren said. "We have to understand compassion, empathy. When you have a child that is suffering in this way, and calling out for her dad — I saw my baby's face in her face. Compassion and seeing yourself and seeing your child, your loved one is what you want no matter the situation."

"We must change how we do business, how we treat people," Warren continued. "We have to understand that they are, at the very core, human beings. And we must treat each other as we want to be treated, as we want our loved ones to be treated."

New York State Attorney General Letitia James called the incident "deeply disturbing and wholly unacceptable" in a tweet posted Monday. "Such use of force and pepper spray should never be deployed against a child, period," James wrote, adding her office was looking into what had happened. "It’s clear that drastic reform is needed."

NYCLU, the New York state-affiliated chapter of the American Civil Liberties Union (ACLU) have said there is no justification for pepper-spraying a 9-year-old. They have called on Mayor Warren to take action. "Rochester police have no business serving as the first responder in a mental health crisis."

But law enforcement officials in Rochester have also expressed concern and dismay at how the young girl was treated.

"I'm not going to stand here and tell you that for a 9-year-old to have to be pepper-sprayed is OK. It's not," interim Rochester Police Chief Cynthia Herriott-Sullivan said Sunday during a press conference with the mayor. "I don't see that as who we are as a department, and we're going to do the work we have to do to ensure that these kinds of things don't happen."

The incident is being investigated both internally by Rochester police and externally by the city's police accountability board.