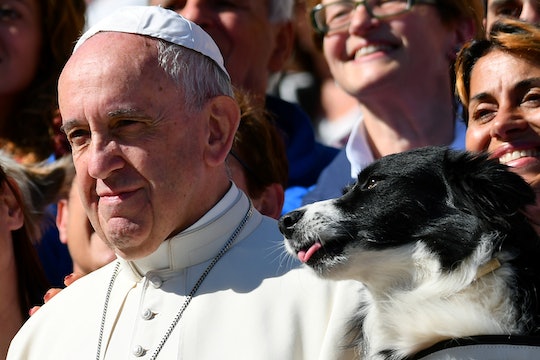 The Pope Criticizes Couples Who Choose Pets Over Kids

The Pope’s comments come as more and more people around the world opt to have fewer kids or no children at all.

Pope Francis has urged couples not to choose having pets over having children. Speaking at the Vatican on Wednesday, the pope deemed couples who consciously decide not to have children as selfish, warning their choice to raise pets instead of children diminishes humanity. The pope’s comments come as more and more people across the globe are reportedly choosing to have fewer children or no children at all, resulting in falling birth rates.

“Today... we see a form of selfishness,” a translation from The Guardian quoted the pope as having said during a general audience at the Vatican on Wednesday. “We see that some people do not want to have a child. Sometimes they have one, and that’s it, but they have dogs and cats that take the place of children. This may make people laugh but it is a reality.”

Birthrates around the world have been declining annually in recent years. In 2020, data released by India’s Health Ministry revealed the country’s total fertility rate, or the estimated average number of children a woman will have in her lifetime, had dropped to below replacement rate, or the rate needed to maintain a stable population, The Washington Post reported. That same year, China’s birthrate hit a new record low, falling into the single digits with just 8.5 births per 1,000 people, CNN reported.

According to data from the U.S. Centers for Disease Control and Prevention (CDC), the United States’ birthrate also reached a record low in 2020. Provisional data shared in May estimated the number of births in 2020 fell 4% compared to 2019, marking the sixth consecutive year that number has dropped. In 2020, the United States’ total fertility rate was reported to be 1,637.5 births per 1,000 women following a 4% drop from the year prior. According to the CDC, the United States’ total fertility rate has consistently fallen below replacement levels (2,100 births per 1,000 women) since 2007.

Given the changing attitudes towards having children, it’s not altogether surprising that Pope Francis’ recent comments on choosing pet ownership over raising children garnered the leader of the worldwide Catholic Church significant backlash on social media. Many pointed out the irony of being chastised for not having children by someone who pursued a childless life themselves.

“I disagree with the Pope about people being selfish [for] having pets over children,” one Twitter user wrote. “No one should be shamed into having a child. By the way, how many children does the Pope have anyway? 0. Zip. Nada.”

Others, like journalist Stephanie Guerilus, pushed back on the pope’s apparent interest in women’s reproductive organs. “The Pope and so many others have such a fetishization of the uteruses of women. Stay out of 'em,” Guerilus tweeted. “Not everyone wants kids. Society barely cares about the kids who are already born and need love, shelter, and happy homes.”

Even Michigan Attorney General Dana Nessel waded into the debate, arguing it was more “selfish” to have children you didn’t wholeheartedly want.

“Having done a great deal of work with the foster care system, I can tell you nothing is more ‘selfish’ than having kids you don’t want just bc the Pope thinks you should,” Nessel tweeted. “Your children will know they weren’t wanted, and it leads to terrible outcomes for both the kids & parents.”