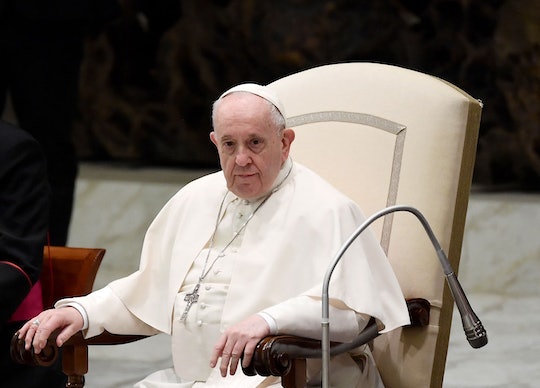 In a series of unscripted remarks given during his weekly general audience at the Vatican on Wednesday, Pope Francis relayed a progressive message to the parents of gay children: “Never condemn your children.” Instead, the pope urged parents to accept and support children with different sexual orientations.

The pope’s message came as he discussed the various difficulties or challenges parents may face when raising their children, such as how they should react to things like sickness and chronic illness. Another example the pope gave mentioned, “parents who see different sexual orientations in their children.” Pope Francis urged those parents “to deal with this and accompany their children and not hide in an attitude of condemnation,” according to a translation provided by Axios.

“And to these parents, I say: Don't be scared. Yes, there is pain. A lot,” Axios reported the pope said. “But think of the Lord, think about how Joseph solved the problems and ask Joseph to help you. Never condemn a child.”

Yet Wednesday was not the first time Pope Francis urged Catholic families to support and embrace loved ones who identify as members of the LGBTQ+ community.

As Romper has previously reported, the pope maintained that “homosexuals have a right to be a part of the family” while being interviewed as part of the 2020 documentary film Francesco. “They're children of God and have a right to a family,” he continued. “Nobody should be thrown out, or be made miserable because of it.”

Earlier that same year, the pope told members of the faith-based LGBTQ+ parental support group Tenda di Gionata, or Jonathan’s Tent, that their children were loved by the Catholic Church. “The Church loves your children as they are because they are children of God,” Religion Digital reported the pope said.

And in 2018, a clerical sexual abuse survivor named Juan Carlos Cruz revealed the pope had told him God loved him just as he was as it was God who had made him gay. “He told me, 'Juan Carlos, that you are gay does not matter. God made you like this and loves you like this and I don't care. The pope loves you like this. You have to be happy with who you are,'" The Guardian reported Cruz said in an interview with the Spanish newspaper El País.

But while Pope Francis has urged parents to accept and support their gay children, the Church’s stance on same-sex marriage has remained unchanged. In March, the Vatican's Congregation for the Doctrine of the Faith said the Roman Catholic Church could not bless same-sex marriages. “It is not licit to impart a blessing on relationships, or partnerships, even stable, that involve sexual activity outside of marriage (i.e., outside the indissoluble union of a man and a woman open in itself to the transmission of life), as is the case of the unions between persons of the same sex,” the Vatican said. “The presence in such relationships of positive elements, which are in themselves to be valued and appreciated, cannot justify these relationships and render them legitimate objects of an ecclesial blessing, since the positive elements exist within the context of a union not ordered to the Creator’s plan.”

So although the pope has sought to share a progressive message of accepting and supporting LGBTQ+ children and adults, the Catholic Church continues to view same-sex marriage as illicit.