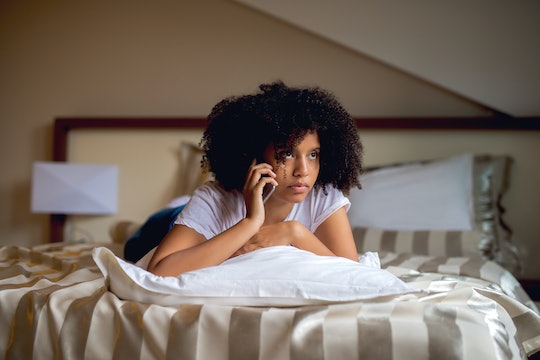 Every woman assumes that the first time they have sex after childbirth probably won't be particularly comfortable, but the hope is that with a little time (and a lot of patience), things will eventually go back to normal in that department. But what if, as the months pass, sex continues to be painful? Why can postpartum sex still hurt after a year (or sometimes even longer)?

First of all, if this is something you're experiencing, you should know that you're not alone. Even though it's not something people necessarily like to talk about, the truth is, quite a lot of women have long-standing sexual issues after having a baby. In fact, one Australian study found that not only do almost nine in 10 women feel pain the first time they have sex after childbirth, but nearly one-quarter still complained about painful sexual intercourse 18 months later, according to research published in BJOG: An International Journal of Obstetrics and Gynaecology. Those are some awfully high percentages, considering how little we hear about this subject.

“Some pain with intercourse right after having a baby is common and experienced by the majority of women. It is more concerning if this pain continues for months, or suddenly worsens. And pain lasting past one year is almost always abnormal," Dr. James Lozada, an anesthesiologist at the Northwestern University Feinberg School of Medicine, tells Romper.

"Anytime sex hurts it's something to be concerned about," Dr. Deitsch tells Romper. "Sex shouldn't hurt, so if it does, seek medical attention first to check for physical issues, then move on to psychological remedies if a medical doctor doesn't resolve it."

None of this is your fault, of course. Because emotions play such a large part in sexual function, everything from anxiety to depression to relationship issues (all things new moms often struggle with) can interfere in your level of arousal, which can result in discomfort or pain.

So what are some physical reasons that sex might still hurt even after you've celebrated your little one's first birthday? Most of the causes are common — and treatable, so don't lose hope!

More Like This
Yes, It’s Possible To Get Pregnant If You Have An IUD
41 Strong & Sweet Baby Boy Names That Start With “K”
50 Love Song Quotes That’ll Give You The Feels
50 Warm & Wise Quotes About Blended Families