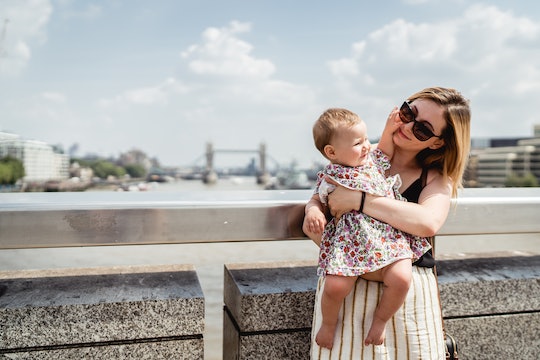 The Britishisms That Saved Me As A Brand-New, Expat Mother

As soon as I landed in London, five months pregnant with my first child, I started to learn a new vocabulary.

The doctor told me if he didn’t make the incision right away, I might have problems with my back passage for years to come.

Back passage is not a term we use in American English, my native language, so I wasn’t familiar with it. But the doctor had explained that the baby was stuck behind my pubic bone, and based on the fact that the incision he wanted to make would be in my perineum, I understood what he meant from context. That was a relief, because I liked to try to figure out what British English words meant for myself. I didn’t like to admit I didn’t understand.

Maybe I should back up a little.

As soon as I landed in London, four months prior, five months pregnant with my first child, I started to learn a new vocabulary.

My new husband had to evict his flatmates in order for me to move into his flat.

When I arrived, fresh-off-the-plane and heavily pregnant, one flatmate was still in the flat. Tom was meant to be gone already. I felt awkward as I stood in front of him, watching him shoveling his clothes into his bulging suitcase, waiting for him to leave.

Tom knew my story: how I met my husband when he was traveling in San Francisco, where I’d been living. How we dated long distance for a bit, and how we then had the happy surprise after one of our passionate visits that I was...

While I was up the duff, my husband and I scrambled to marry and apply for a spousal visa, which got lost in a bureaucratic mess while our fetus gestated. I learned another new word during this time: MP (abbreviation, Brit. Eng.: Member of Parliament). Our immigration lawyer suggested I should petition my husband’s MP to lobby the British immigration authorities to approve my visa before it was too late and I was forced to stay behind in America and give birth to our baby alone.

I ate a lot of choc ice in the sweaty months that followed my arrival in London. My pregnancy had progressed to the level where my belly bulged out architecturally, a perilously cantilevered balcony out over my hip bones.

“Looks like the baby’s takin’ you for a walk!” my mother-in-law said, every time she took the train in from Essex to visit.

“It’s like: thanks for the review of my body,” I’d hiss to my husband after she left, my indignation burning like the acid reflux that had started early in my pregnancy

Eating a choc ice was a puzzle, biting off the brittle chocolate coating without dropping it on the ground. It was a race against time in the baking August air. It was a small comfort, maybe pathetically so, but honestly it helped. Maybe because it was a puzzle that I could solve. And maybe because it was my husband giving it to me. Just because everything seemed so difficult and foreign and unpleasant right now, it didn’t mean he didn’t love me.

In my country, we have a top sheet, a middle blanket layer, and then a thin-ish upper blanket we call a “comforter.” Instead of this sensible series of thin layers (take some off! Put some back on! Voilà, a comfortable night’s sleep!), there was now a confusing, foreign, smothering duvet. My husband saw no contradiction in its thickness and the heat of my arrival season, and no issue with us sharing something that had been just for him. I created the word two-vet (n., made up Eng.: two duvets) to describe the solution I found for this problem.

Everything in my life was suddenly like this: a negotiation between me and my husband. We were both stubborn and eccentric in our habits, but he was the one on his home turf. Two duvets was about as close as I could come to getting my own way, and this wore on me, sapping my energy outwardly, while the baby sapped it inwardly.

Everyone we talked to told us we’d better join an NCT group to make some parent friends in our area.

It turns out NCT groups are a form of secular fellowship founded on a shared faith: that we will all one day be good mums and dads. We sat in a circle with stranger couples we’d been matched with because we all had similar due dates. The women were all in the architectural stage of pregnancy, rubbing their bellies or resting their palms in a stack atop them. Most of the men were silent as the group leader talked, telling us that we’ll learn about childbirth, breastfeeding , and baby care. My husband couldn’t resist breaking almost every silence with a nervous joke.

The recovery room faced Big Ben’s scaffolding-shrouded tower, and I watched the luminous clock face to see how long my son had been alive.

Quickly these strangers became people we knew intimately, if unevenly. We may not have caught their surnames, or gotten any idea what they did for a living, but we knew which ones thought they were “ready,” based on the gear they had purchased. Which one wasn’t sleeping because she had a persistent, metallic taste in her mouth. Which one was worried about how her chronic depression would affect her ability to parent (that one was me).

On the 6th of November my contractions began. They roiled through my body for 10 hours before they became regular enough for us to call an Uber (the Uber driver was unphased) and speed through the night to St. Thomas’s. The red-lit London Eye peered through the window of the room where, over the course of the next 26 hours, I gave birth to my son. The recovery room faced Big Ben’s scaffolding-shrouded tower, and I watched the luminous clock face to see how long my son had been alive. A baby: an immutable, pre-verbal being, a fact beyond language.

After the baby was born, we stayed three days in the hospital’s recovery ward for no reason. Here the days slipped away and they seemed to have forgotten about us. No one could give us a straight answer about what we were waiting for, and finally we had an hours-long showdown in which my husband spoke rapid-fire English at a series of increasingly senior midwives until he could sufficiently, firmly, apologize our way out of there. In my country, all he would have needed to say was we didn’t want to pay for it.

We escaped home in a black cab manned by a Cockney driver who wanted to tell us about the births of each of his seven children.

Once we got home, I began to learn another vocabulary.

NHS midwife, n. (Brit. Eng.): a representative of the government who comes to your house and tells you how to dress your baby.

The baby needed a “vai-st”, my NHS midwife practically shouted at me.

I had trouble understanding her accent, which my husband said was from Yorkshire. She informed me that the baby could NOT wear a “bai-by gr-O-w” (the word she used for the long-sleeved one-piece number I’d dressed him in for her visit) without a “vai-st” underneath.

“You do have a vai-st, don’t you?” she asked in disbelief. She was nervous about us -- some word had been passed down the midwife chain of command that we’d left the hospital against advice and needed watching.

I was forced to make a rare admission: “I don’t know… what that word means.” In the two days the baby had been home from the hospital, I think I’d slept an hour. “Sometimes a lot of the words for clothes… and baby things… are different.”

She seemed relieved that my hesitancy was one of incomprehension, not necessarily a negligent shortage of vai-sts. Maybe I hadn’t failed this motherhood test yet.

“A little top with no sleeves and studs at the bottom,” she said. I call them snaps, not studs, but still, I understood now.

“Oh, yes,” I clambered to my feet slowly, feeling every one of the back-passage-saving stitches between my legs. I hobbled to the baby’s room and found a light-blue vest and, clutching it, hobbled back to where the midwife sat in the living room. I held it up and she nodded. Victory. The midwife stripped the baby-grow from our son’s tiny limbs in order to add the vest, immune to the sound of his tiny, piercing cries.

The NHS therapist who I saw for my postpartum depression often said needs must as he shuffled through the A4 papers he held in a battered folder, trying to find the right exercise or flowchart that would help me make sense of my noisy, painful thoughts.

This was cognitive behavioral therapy, not the expensive talk therapy I’d paid for in my country. This therapy had things to practice. There was homework. Our sessions began with a questionnaire for me to fill out, where I’d rate aspects of my anxiety and depression on a 1 - 10 scale. Apparently the questionnaire came in a multitude of slightly different variations, and the therapist rarely had the exactly appropriate one for me. “Oh well, needs must, really,” he’d say, crossing off large sections of the version of the questionnaire he’d managed to produce from his folder.

I Googled the phrase hoping to learn the rest of it. It sounded like one of those idioms like “if the shoe fits”, where the ending is implied and given extra weight by having the listener fill in the blank in their mind. But I didn’t know the ending.

It turns out the phrase is: “Needs must when the devil drives.” The idea of the devil driving made sense, as I waded through those months of postpartum depression. I’d been depressed before, but this was like nothing else. The days ground by, hour by hour, each one taking excruciatingly long yet piling up undifferentiated, weeks accumulating like drifts of snow in a blizzard that was freezing me to death. This was the first time depression really incapacitated me. As if I was drunk, I was no longer in control. I barely left the house. I spoke to almost no one for thirteen hours a day, not even my baby. I had little to say to my husband when he got home from work. Language faded into silence.

I knew what was happening, but somehow it was only after I woke up that it really became clear.

Citalopram, proper noun (Brit. Eng.): the generic name for the anti-depressant and anti-anxiety drug we call Celexa in America.

Citalopram helped wake me up. Exercise woke me up. The sudden ending to my nine-month-long maternity leave woke me up.

Childminder, n. (Brit. Eng.): a person (almost exclusively a woman) who takes care of children in their home for a fee.

My son began to go to a childminder for three days a week, and a nursery in a deconsecrated church near the Tower of London two days a week. At work, I wrote words for an app that brings food from different restaurants to your door. I wrote in British English and would continually make my British coworkers self-conscious by asking them if what I’d written sounded British or not.

People at home ask me if my son will have a British accent, like it’s a question. As if somehow I can simply give him my voice and protect him from the torrent of language that’s all around him. He’ll speak like the people around him do. Like everybody does, until they move somewhere else, and everything changes.