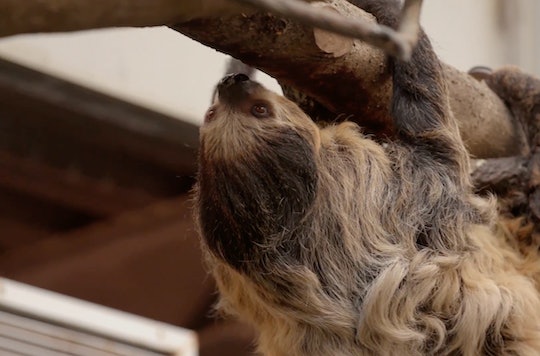 Staff at The Cincinnati Zoo hope lugging the soft plush toy around will help the expectant sloth get used to the sensation of carrying her newborn.

Staff at the Cincinnati Zoo in Ohio are helping a pregnant two-toed sloth prepare for motherhood using a child’s toy. To gain experience with carrying her newborn around on her underside as she slowly moves through the trees of her enclosure, zookeepers have given the pregnant sloth a small stuffed animal to tote around in the final weeks of her pregnancy.

“Lightning is due with her first baby at any time,” the Cincinnati Zoo wrote when sharing a photograph of the expectant sloth on Instagram late last month. In the photograph, Lightning can be seen hanging upside down from a tree branch as a small plush sloth toy rests on her chest in much the same manner a newborn sloth might. “She is practicing with a stuffed sloth so she’s used to the sensation,” the zoo noted.

The toy also serves another purpose, according to zoo staff. Carrying the stuffed animal — and having zookeepers take it from her every so often — gives staff at the zoo the opportunity to help Lightning become used to her care team periodically removing her newborn for health checks.

“We are so excited that Lightning is pregnant!” Sarah Swanson, the zoo’s interpretive animal team leader, said when first announcing the pregnancy in February. “The sloth animal care team has been on this journey since 2016 and now we are so pleased to bring our sloth fans along for the rest of the ride and into this new baby’s life.”

But Swanson cautioned sloth supporters not to get too excited right away, as Lightning’s pregnancy would likely be a long one. “Patience is a must when you work with sloths,” Swanson said. “They have a 10-month gestation period.”

Lightning, who just recently turned 9 years old, came to the Cincinnati Zoo in 2019 and met the zoo’s 21-year-old two-toed sloth Moe late that year. The two sloths are reported to have needed some time to warm up to each other. It appears sloths do courtship just as slow as they do nearly everything else.

According to the zoo, Lightning’s expected birth window extends into October, meaning she could give birth anytime between now and then. And while Lightning is practicing in preparation for motherhood, zoo staff have said they are confident she’s up to the task.

“We are fairly confident that Lightning’s assertive personality will lend well to being a first-time mom,” Swanson said in February. “She will do most of the work once the baby is born. It will latch on to her and stay attached for the next 10-12 months.”