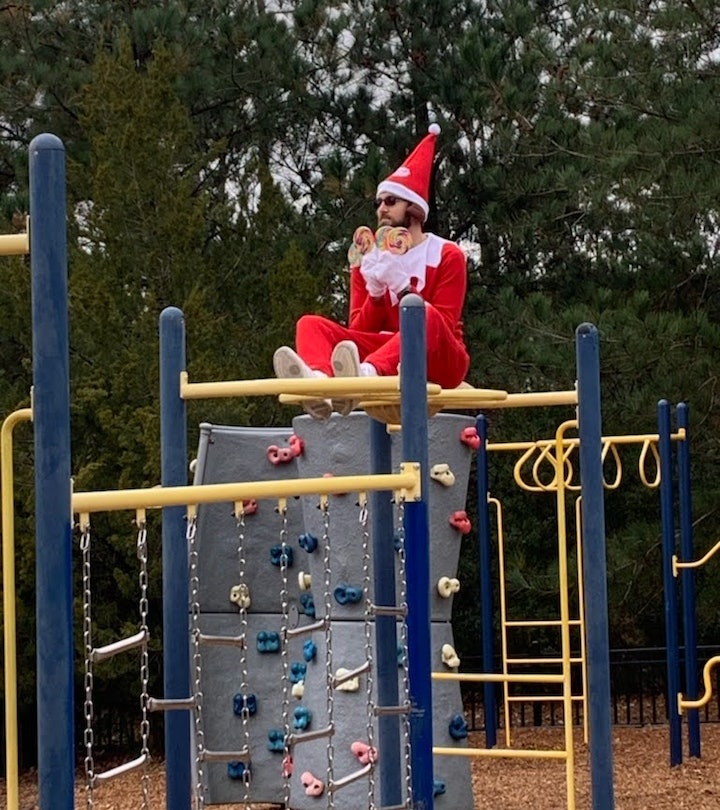 This School Principal Dressed Up Like An Elf On The Shelf

As his students prepared for a holiday season unlike any they've experienced before, one North Carolina educator found a creative way to spread a little cheer. On one of the last days of school before winter break, Kensington Elementary School Principal Terry Vaughn Jr. became Elf On The Shelf, delighting students with his mischievous hijinks.

"With all of the transitions and unique ways of learning that have been placed on our students, little pieces of happiness like this are more important than ever," Vaughn tells Romper of his decision to slip into a red-and-white Elf On The Shelf costume — complete with the hot new 2020 accessory: a white face mask — as a surprise for students.

Throughout the school day students found Vaughn getting into all sorts of mischief. From hula hooping on the building's roof and eating candy on the playground to wreaking havoc around the drinking fountains and getting stuck inside a display case, Vaughn had a busy day as Elf On The Shelf. But in the end, it was worth it to see how delighted students were.

"Not a lot is familiar this year, but this was a welcome reunion," Kensington Elementary School wrote when sharing pictures of Vaughn's antics on Facebook. "There were some new students with shocked faces and lots of smiles, giggles, and whispers through the halls today."

This isn't the first time Vaughn has gotten into costume to surprise his students or even the first year he's turned himself into Elf On The Shelf. Photos shared on the school's official Facebook page show Vaughn dressed as Buddy the Elf earlier this month. Vaughn also shared photos with Romper of himself dressed as the conductor from Polar Express and "driving" a makeshift cardboard train down school hallways. He reportedly started the Elf On The Shelf tradition last year as a means of infusing the final days of school before winter break with extra cheer.

"Like many schools all over the nation, we are constantly trying to make school a fun and desirable place," Vaughn tells Romper. "Throughout the year, we look for opportunities to surprise our students and make them smile, especially this year."

Parents and caregivers showered Vaughn and the school with their thanks on Facebook, with many proclaiming the stunt to be exactly what kids needed this year and Vaughn the greatest principal ever. "My kids exact words, 'Best principal ever!' and I can't agree more," one parent wrote.

While the students and parents at Kensington Elementary School may feel they have the best principal ever, Vaughn told local NBC affiliate WCNC he's no different from most other educators. "This is one small elementary school in an entire nation filled with principals and educators that are going to bat for kids every day and going above and beyond to make things exciting and magical," he told the news outlet.

But Vaughn tells Romper his efforts to make students smile extend well beyond the holidays. "This is a perfect example of the building culture we try to create throughout the year," he tells Romper of his Elf On The Shelf antics. "I am grateful to be able to do what I do on a daily basis."