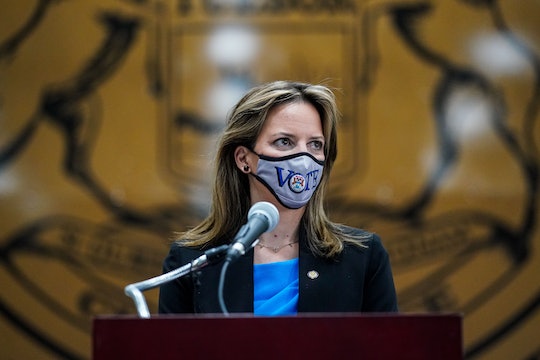 Protestors Demonstrate At Home Of Election Official & Her Preschooler

Michigan Secretary of State Jocelyn Benson says armed protestors demonstrated in front of her house while she and her 4-year-old decorated for Christmas.

Michigan Secretary of State and Chief Election Officer Jocelyn Benson and her young son spent their Saturday putting up Christmas decorations in their Detroit home together. They were about to sit down to watch How the Grinch Stole Christmas when they heard a commotion in the front yard. "Dozens of armed individuals stood outside my home shouting obscenities and chanting into bullhorns in the dark of the night," she wrote in a statement. While she supports the Constitutional right to protest, Benson said she felt this gathering "crossed the line" into intimidation. "The demands made outside my home were unambiguous, loud, and threatening."

More Like This
Florida Homecoming Queen Accused Of Rigging Votes With Mom
The Obamas’ New Family Rule? Get Vaccinated If You Want To Hang Out With Us
Biden Proposes Plan To Give Every Child Free “High-Quality” Preschool
This First-Grader Convinced An Educational App To Add Black Hairstyles To Avatars

Those gathered did so based on unfounded, debunked claims that the presidential election was somehow fraudulent and that election officials are conspiring against President Donald Trump. It's a narrative the president himself has widely and repeatedly supported, both at rallies and on Twitter, even as various lawsuits from the Trump campaign alleging wrongdoing are being dismissed in courts throughout the country. Chants of "Stop the steal!" broke out several times throughout the night, as seen in a Facebook live stream posted by protester Genevieve Peters. More pointed accusations were also directed at Benson, within earshot of her 4-year-old's bedroom. "You are a tyrant! You are a felon!" one protestor declared over a bullhorn. "And you must turn yourself into authorities immediately!"

The threats, while jarring, are perhaps not surprising in the current political climate. Across the country, politicians, election officials, and even election workers have faced harassment, intimidation, and even death threats for their perceived role in "stealing" the election. In a press conference, top Georgia voting system official and self-described Conservative Republican Gabriel Sterling made an impassioned statement pleading with GOP leaders, including and especially President Trump, to denounce this intimidation and the conspiracy theories that inspire them. "Someone's going to get hurt," he said, anger barely contained. "Someone's going to get shot, someone's going to get killed."

Benson's colleagues, Michigan Attorney General Dana Nessel and Wayne County Prosecutor Kym Worthy released a joint statement condemning the actions of the protestors. "This mob-like behavior is an affront to basic morality and decency," they wrote before continuing. "Anyone can air legitimate grievances to Secretary Benson's office through civil and democratic means, but terrorizing children and families at their own home is not activism."

Benson, who has talked about this experience in several media appearances over the past several days, admits to feeling concerned for her son. "My heart was focused on my kid," she told NPR's Ailsa Chang. On Anderson Cooper 360, she expressed her concern at the time for the other children in her neighborhood (several neighbors, in fact, can be seen approaching protestors in Peters' live stream), and said she was focused on "making sure to create an island of calm" around her son. But her sense of duty to voters, she said, hardened her resolve to abide by the oath she took as an elected official.

"Through threats of violence, intimidation, and bullying, the armed people outside my home and their political allies seek to undermine and silence the will and voices of every voter in this state, no matter who they voted for," she wrote. "Their goal is to overturn and upend the results of an election that are clear and unequivocal. ... But their efforts won't carry the day. Because our democracy is strong."

And yet conspiracy theories and GOP officials have not given any indication that their resolve has softened either. In a Tuesday tweet, President Trump thanked Speaker of the Pennsylvania House of Representatives, Bryan Cutler, for his role in asking his state's Congressional delegation to reject the state's election results in January. On Tuesday morning, Texas Attorney General Ken Paxton filed a lawsuit in the United States Supreme Court suing battleground states Georgia, Pennsylvania, Michigan, and Wisconsin for "ignoring federal and state election laws and unlawfully enacting last-minute changes" which, the suit claims, "flooded their people with unlawful ballot applications and ballots while ignoring statutory requirements as to how they were received, evaluated and counted." There has not been any evidence of significant election fraud, much less state-wide malfeasance.

In her video of the protest at Secretary Benson's home, Genevieve Peters announces defiantly. "We are letting her know that we're not taking this [expletive] election, we are not standing down, we are not giving up, you are not going to take this election from a man that has earned it completely 100% by a freaking landslide. Let me tell you — this ain't over."