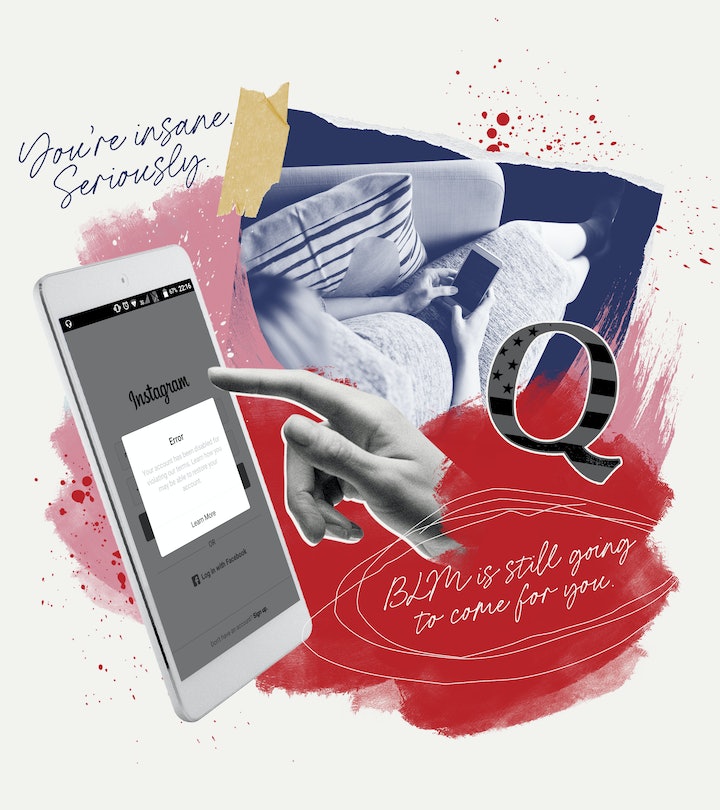 One morning late last year, I woke up to an annoying but not unusual flurry of comments from other white women who didn’t like one of my Instagram posts from four days days earlier. Over the course of a few hours, that flurry became a full-blown winter storm of hate and harassment: I had come face to face with QAnon moms.

I am not an influencer; I have around 1900 followers, amassed by posting photos of my kids and anti-racist content directed specifically at white women. I had created a series of Instagram stories about racist books in homeschool in February 2020 that was shared widely. From that point forward, I began regularly talking about the role we white women have in upholding white supremacy.

The post that set off the maelstrom was this one, in which I reiterated that white women are co-creators and upholders of white supremacy — not a new sentiment from me after nearly a year of sharing similar content on my feed. The first few comments early that morning were disgruntled yet nothing new, but, by 10 a.m., the post was flooded with more than 200 hateful comments not just about my content, but about me — and my kids.

“This is not normal. This is not a healthy way of thinking and you need help.”

“Why don’t you just off us all already. That’s what you really want.”

“Oh wow — this is such damaging ideology for kids. It’s heart breaking that you homeschool and hold such toxic ideas — makes me honestly very sad for your daughter. ”

“You need to look for a good family counselor when your children become suicidal if they aren’t already… kids often cut themselves in their teens but you seem ok with that.”

“I should report you this is clearly child endangerment.”

At 12:30 p.m., Instagram notified me that my post had been removed for — get this — hate speech. The hundreds of vile comments were gone along with the post, which meant I was no longer able to report any of the comments or accounts that had been spewing actual hate speech, harassment, and threats. The few I had reported generated Instagram’s standard reply: We found that this likely doesn’t go against our community guidelines. (Instagram did not reply to a request to comment.) But even with the post removed, the trolling didn’t stop — Instagram users simply moved on to commenting on other posts and sending me direct messages. They were relentless, and I felt helpless.

As far as I can tell, the instigator of my ordeal was a mom who I had never heard of. If you happen upon her profile, you’ll find an “integrative health practitioner” with 21K followers. She posts lots of recipes and rather uninspiring infographics about phytonutrients. Her account isn’t explicitly QAnon and she doesn’t publicly identify this way — a month ago she described “Q” adherents as “led astray” — but a lot of accounts spread QAnon ideology in subversive ways, sometimes even unknowingly. Identifying that ideology — and the Q influence — often requires reading between the lines.

Many QAnon followers don’t fit the profile of the people we witnessed climbing the Capitol walls that day. Some of them are moms, just like you and me, scrolling Instagram in between remote learning and loads of laundry.

QAnon is a complicated far right-wing conspiracy theory that asserts the existence of both a secret “deep state” (that operates a corrupt, hidden government) and a cabal of Hollywood sex traffickers. But over the last year, its influence has infiltrated almost every corner of social media, making conspiracy thinking of all kinds more mainstream than ever. The role QAnon supporters allegedly played in the attempted coup at the Capitol in January has increased our awareness of the ideology, if you can call it that, but many QAnon followers don’t fit the profile of the people we witnessed climbing the Capitol walls that day. Some of them are moms, just like you and me, scrolling Instagram in between remote learning and loads of laundry.

In November, this particular mom’s “highlights” were full of rants about the rise of socialism, Dr. Fauci’s botched COVID response, and opposition to Black Lives Matter and critical race theory (the last of which she has since deleted). Despite her open disagreement with QAnon after January 6, she was textbook.

Over a period of hours on her Instagram “stories,” she questioned my intelligence, using my post to argue that systemic racism isn’t real, and tagging me so people could easily find my account. As this went on, I received more harassing comments on my posts and in direct messages. When Instagram eventually removed my post, the woman claimed in her stories that I had deleted it because I couldn’t handle people disagreeing with me. She and her followers found out so much about me so quickly — sifting through my posts to discover my religious beliefs, my husband's profession, our choice to homeschool — and I wondered what they would do with this information.

Users were finding posts of my children, unrelated to any anti-racism content, and leaving comments like, “Poor kid, going to grow up hating his skin color.”

They told me that I hated my own children.

They scrolled through to posts dating back almost a year to leave comments calling my religious faith into question.

They said I was “self obsessed” and “cultivating hate.” They said they wanted to meet me just so they could slap me.

My friends and followers reported those stories to Instagram for bullying and harassment to no avail. Some messaged the woman directly to ask her to stop tagging me because I was receiving so much harassment.

In response, this woman claimed that other accounts with hundreds of thousands of followers had shared my post (I had no evidence of that in my insights or tags) and that it wasn't her followers who were being hateful; mine was the hateful content.

By 4 p.m. that afternoon, I switched my account to private to protect myself and my children. Within 72 hours, Instagram had disabled my entire account for “violating community guidelines.” It would be an entire month before I would get it back.

I was in a fog. These people weren’t simply disagreeing with me; they were attacking and threatening my family. QAnon had screenshotted my life, and Instagram was gaslighting me.

What I couldn’t get over was that, at first glance, this woman didn’t seem all that different from you or me: she appears to be a mom trying to do what’s best for her kids. Especially after January 6, I think people assume QAnon is a group of dark web, white male conspiracists. The people who left hateful comments on my post were not bridge-dwelling trolls or red-hat wearing MAGA boys: they were smiling moms, seemingly successful business owners running local clothing stores and restaurants. They were wellness practitioners. They don’t have “Tom Hanks drinks the blood of children” in their bios. They post pictures of their kids in Halloween costumes, just like you, just like me.

As scary as it was to be the target of such vicious trolling, what really terrified me was realizing that so many moms have no idea they’ve been recruited as QAnon influencers. That lack of awareness should scare all of us — because moms are falling hard.

Since my experience, I see QAnon’s influence everywhere: It’s in the Facebook group with the bone broth and elderberry recipes where there’s been a lot of anti-vaxxing talk lately. It’s in those very weird opinions about Chrissy Teigen, Oprah, and even Hilary Duff circulating on Twitter.

QAnon is targeting us in our yoga studios, our mom groups, our alternative health practices, our multilevel marketing networks, our natural parenting communities, and our favorite Instagram wellness accounts (“Pastel QAnon”). We’re getting drawn in because, as Anne Helen Petersen observed in Elle, “The entryway is beautiful, like the waiting room at a spa, only the spa itself is a fearsome dungeon.”

Since my experience, I see QAnon’s influence everywhere: It’s in the Facebook group with the bone broth and elderberry recipes where there’s been a lot of anti-vaxxing talk lately. It’s in those very weird opinions about Chrissy Teigen, Oprah, and even Hilary Duff circulating on Twitter. When I see a reference to #SaveTheChildren, I know. When I read a post connecting any of QAnon’s favorite conspiracy topics — Wayfair, 5G, anti-Black Lives Matter propaganda, and election fraud — I know. QAnon is in Facebook posts about the “Plandemic” and microchipping that misinform our Boomer parents and it’s seeped into videos aimed at Gen Z on Tik Tok and YouTube (yes, it’s reaching our kids, too).

It’s possible that calling out QAnon is useless; after all, who has ever won an argument with a stranger online? But what do we do when these conspiracies infiltrate our daily lives in more subtle and gravely consequential ways? Like when a favorite acupuncturist doesn’t require masks at their clinic, when our parents won’t get vaccinated, when our local schools reject an anti-racist curriculum... then what?

Since then, my Instagram life has felt pretty normal; although, I do think twice every time I want to post a picture of my kids. It seems like QAnon took a hit when Trump left office, with many people backpedaling away from the extreme ideas they were spouting back in the fall. The mom who tormented me has cleaned up her account, deleting some of her thoughts on racism and COVID conspiracy highlights. But we can’t afford to be lulled into thinking it has disappeared; widespread conspiracy thinking is here to stay. And if we’re going to resist Q, we’ve first got to recognize it when it shows up in our lives — because it probably already has.

More Like This
Divorce Freed Me From The Pressure To Throw A Perfect Birthday Party & I Wish I’d Thought Of It Sooner
Ivanka Trump Shares Why She Won't Be Involved In Her Dad’s 2024 Presidential Run
My Queer Pregnancy Began In A Cold Doctor’s Office, But It Was Also Weirdly Romantic
The Best Black Friday 2022 Deals For Moms