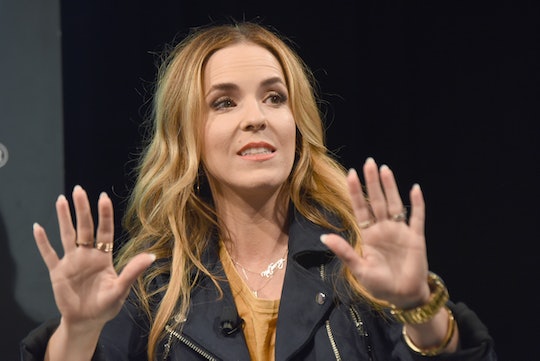 The author and entrepreneur has remained silent on social media since apologizing for an insensitive TikTok video earlier this month, but some fans and collaborators have cut ties with Hollis and her company.

You may have heard a lot of chatter about a Rachel Hollis controversy on Twitter and Instagram since the beginning of April. How the self-help book author apologized (several times over) to fans and followers for an insensitive post on TikTok. But what happened exactly? Here’s a quick explainer to catch you up to speed.

Who Is Rachel Hollis?

Rachel Hollis is an author, motivational speaker, and blogger with a huge online presence. Her self-help book, Girl, Wash Your Face has remained wildly popular since it was published in 2018 and has sold over 4.5 million copies, according to Hollis’ website. Subsequent books include Girl, Stop Apologizing and Didn’t See That Coming. Her company, The Hollis Company (which she styles as HoCo) “produces content in every kind of media format: books, podcasts, movies, social and live events as well as physical products.” All, she writes on her website, with the goal of giving readers tools to make “permanent and lasting, positive changes in your life.”

Hollis lives outside of Austin, Texas. In June 2020, she announced her divorce from husband David Hollis. The couple has four children.

In a recent Instagram Live, Hollis mentioned having someone who came to her house twice a week to clean. When a commenter responded that mentioning having a cleaning person was “privileged” and “unrelatable,” Hollis took to TikTok to respond in a now-deleted post. But, since nothing on the internet every really goes away, it still exists in other formats...

“You’re right, I’m super freakin’ privileged, but also? I work my a** off to have the money to have someone come twice a week to clean my toilets...,” she said in the video. “And then she said ‘Well, you’re unrelatable.’ What is it about me that made you think I wanted to be relatable? No, sis. Literally everything I do in my life is to live a life that most people can't relate to. Most people won't work this hard. Most people won't get up at 4 a.m. Most people won't fail publicly again and again just to reach the top of the mountain. Literally, every woman I admire in history was unrelatable. If my life is relatable to most people, I'm doing it wrong."

Below the video, her caption read:

Social Media Was Not Impressed

The video prompted a flurry of responses who did not take kindly to Hollis’ seeming to compare herself to prominent women of color nor to the idea that she simply outworks anyone who is not as financially successful as she is.

“Rachel Hollis might be able to afford a housekeeper bc she ‘gets up at 4am and works her a** off every day,’ but I can almost guarantee that housekeeper does the same thing – but for multiple houses a day and they’ll never become a CEO,” Twitter user @carlymbutton observed.

“That video has been up for 4 days,” author Luvvie Ajayi tweeted. “She’s gotten thousands of comments from people telling her why it’s problematic AF. But it’s still up and she hasn’t addressed it. The caucasity. The Beckery. I’m like wow.” (Ajayi went on to observe that “a Black woman could not make such a misstep and still retain all this support.”)

“Rachel Hollis be like ‘I don’t strive to be like you poors. Also buy my new book, Girl, Give Me Your Money, out in two weeks,” joked @thearibradford.

Her First Apology Has Since Been Deleted

On April 4, Hollis posted a written apology on her Instagram account (which boasts 1.6 million followers). In it, Hollis laid much of the blame at the feet of her PR team, according to reporting from Relevant. “I didn’t respond to these things on Friday when I heard that people were upset. I listened to my team instead of my gut,” she said. “I listened when they told me not to respond, to let it blow over.” She also denied the idea that she was comparing herself to any of the women mentioned in her caption as being similarly “unrelatable” saying (per screenshots), that the idea that she was was “ludicrous” and that “there is no comparison.”

The apology also tagged several prominent Twitter users who initially criticized the TikTok post, including Ajayi (who was unimpressed).

In her second attempt, on April 5, Hollis once again took to Instagram to apologize, this time directly addressing people’s anger and her own missteps.

“I know I’ve caused tremendous pain in mentioning prominent women — including several women of color — whose struggles and achievements I can’t possibly understand,” she wrote. “By talking about my own success, I diminished the struggles and hard work of many people who work tirelessly every day. I disregarded the people whose work doesn’t afford them financial security, often due to inherently racist and biased systems. I did not allow a space for people to voice their anger, hurt, and disappointment, which caused even more pain.”

“I acknowledge my privilege and the advantage I have as a white woman, no matter how I grew up,” she continued. “There are many things I would like to say to reiterate just how sorry I am, but the important thing for me to do now, something I should have already done, is honestly, be quiet and listen. I know I have disappointed so many people, myself included, and I take full accountability. I am so sorry.”

Some fans have come to her defense, claiming Hollis is a victim of “cancel culture.”

“As soon as someone makes a mistake people are lurking ready to jump and destroy them,” tweeted @robertlistens.

“I don’t agree with Rachel Hollis’s [sic] actions at all, but cruelty never changed a person,” said @katlyngiberson. “It’s time to cancel our cancel culture.”

However, it seems that for many the second apology has still not proven sufficient damage control for Hollis or her brand of plucky empowerment and positivity.

From Twitter user @Kinetic_Kel: “There is no weaker person than one who can’t graciously handle being checked on their unwanted behavior. The absolute weakest try to defend it.”

Since the initial incident and subsequent apologies, The New York Times has reported that Hollis has lost approximately 100,000 followers on Instagram (a fraction of her following more than a million and a half strong) and has postponed several events. Her company's women's conference, Rise, initially set for May, has been postponed until Labor Day. Two featured speakers — online marketing educator Amy Porterfield and motivational speaker Trent Shelton — no longer appear in promotional materials, with Porterfield specifically saying she would not longer be participating.

Editor’s Note: A previous version of this article noted that Rachel Hollis was married. She announced her divorce in June 2020. This article has been updated.

This article was originally published on April 6, 2021