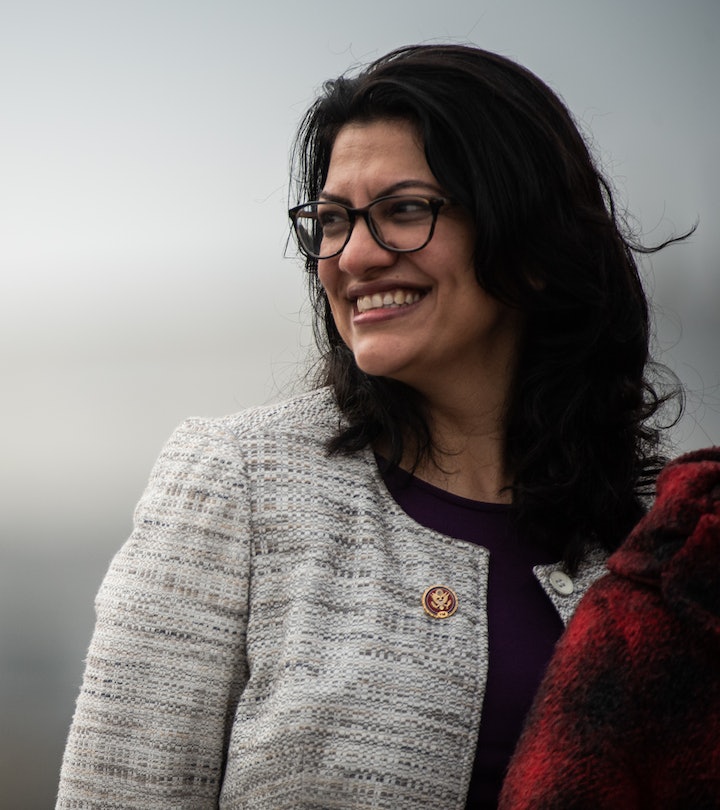 When Representative-elect Cori Bush took to Twitter earlier this week to discuss the expense involved in building a wardrobe fit for a job on Capitol Hill, she received a number of tips from her-soon-to-be fellow congresswomen. And while everyone loves a good budget-friendly fashion tip, there was one member of Congress whose advice was especially relatable for moms. In responding to Bush's tweet, Rashinda Tlaib revealed she sometimes still wears maternity clothes to work.

"The reality of being a regular person going to Congress is that it's really expensive to get the business clothes I need for the Hill," Bush tweeted Tuesday. "So I’m going thrift shopping tomorrow." After unseating 20-year congressional veteran Rep. William Lacy Clay in Missouri's Democratic primary in August, Bush defeated candidate Republican Anthony Rogers in the Nov. 3 general election to win Missouri’s 1st Congressional District and become the state's first Black congresswoman.

Within hours, dozens of congresswomen had responded to Bush's tweet offering their own tips and advice — much of which centered around hitting up thrift stores or renting key clothing pieces — for building a great congressional wardrobe on a "regular person's" budget. But it was Tlaib's response that really resonated with moms on Twitter.

"Cori, I still wear some of my maternity clothes under those blazers," Tlaib tweeted. "P.S. I get the most compliments from the clothes I got from thrift shops."

In a tweet to Representative-elect Cori Bush, Rep. Rashida Tlaib revealed she sometimes still wore maternity clothes to work despite her youngest being 8.

Tlaib has two sons, the oldest of whom is reported to be 14 years old while the youngest is around 8 or 9 years old, according to Heavy.

Judging by the responses Tlaib's comment generated, it seems she's not the only mom who has kept some of her maternity items in her wardrobe. "Yes to moms that wear maternity clothes postpartum," one Twitter user commented. "It’s so much more than the clothes. It’s accepting that our bodies have changed."

Other moms shared that they too still wore some of their maternity clothes despite no longer being pregnant. "I still wear maternity clothes and my son is almost 4," one mom tweeted. "No judgment here —they’re so comfortable! Especially with the holidays coming soon!"

Another mom revealed that she too still wore a few of her maternity tops even though her youngest was well into their teens. "I still wear a few maternity blouses myself and my youngest is 16!," the Twitter user commented. "Nobody knows the difference."

One Twitter user urged people to "normalize wearing maternity clothes even if your children are double digits."

In fact, some moms joked that things like "maternity pants" were "for life."

The truth is, wearing maternity clothes well after baby's arrival isn't that uncommon. In fact, a number of moms, including Katie Bingham-Smith over at ScaryMommy have copped to wearing maternity clothes years after their pregnancies ended. And ultimately, that's exactly why Tlaib's tweet resonated with so many moms on Twitter: It was a refreshing reveal of honest mom life.