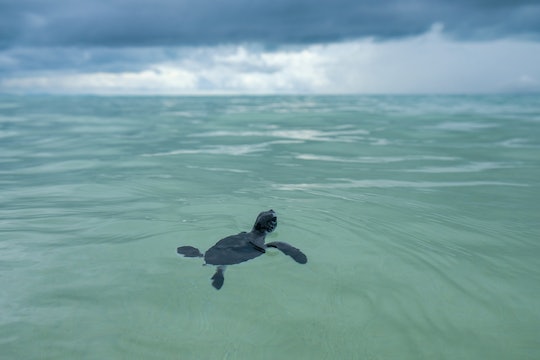 Children are magical thinkers. It’s why they’re so much better than adults are at death.

The day Hal died, a turtle appeared on our driveway — the kind of turtle that cannot survive for very long without a pond. So how did it get there? How did it end up at our house, two blocks from the park where it likely started? I didn’t have answers but the kids certainly did.

“It’s Dad. He’s letting us know that he safely crossed the road to get to the other side.”

Children are magical thinkers. It’s why they’re so much better than adults are at death. I have navigated every day since Hal has died, not as the lighthouse, but as the ship that sails toward the four beams of light that are my children. They didn’t just see a turtle. They never have.

The turtle became an instant symbol for Hal and our life without him. Turtles came up constantly after that. Friends and family filled our home with turtle imagery, cards, and jewelry. And when it came time to design a headstone for Hal, the kids drew up their own — a turtle.

The stars on the headstone separating the dates were copied directly from the star tattoos Hal had on his shoulder. Three little stars representing birth, death, and what comes after. The three tenses, like portions of hair in a braid. If death was a shape, it would be a triangle. If death was a satellite, it would be a star. Do you feel it? Like an exploding ball of doom, but also hope.

Thank you all for your time.

It has been incredible.

Anything can happen. Believe.

I have navigated every day since Hal has died, not as the lighthouse, but as the ship that sails toward the four beams of light that are my children.

It was just the five of us and my friend Linda.

From the moment of Hal’s diagnosis, Linda had been my death doula, holding on to my paperwork and making calls on my behalf. She was the one who organized the notary public to come to Hal’s hospital room so he could sign the power of attorney documents. She was the one who reached out to his employer in the weeks after his death. Helped me with tax documents and insurance policies.

She was the one who called Noelle at Hollywood Forever to see if there were any available plots soon after Hal died. She organized the payments and payouts — went over documents so I didn’t have to. Vetted everything. She was one of the many women in my life who made it possible for me to be the wife and mother I desperately wanted to be at the end. She also helped organize the burial. And so, after checking in with the kids to see how they felt about it, I asked her to join us.

On the day of Hal’s burial, ash was falling from the sky like Purple Rain. It was early November when we found ourselves reluctantly nestled under a blanket of smoke, arms linked as we trekked across the expanse of newly mowed grass and granite toward a tent we didn’t realize was erected in our honor, cerulean against a chestnut sky.

The weather hadn’t changed much since early July when Hal was first diagnosed. Here we were, months later, and the fires were still blazing uncontained in the hills. But the smoke provided a kind of privacy we might not have had otherwise. We would be able to dance around his grave with no one around us.

And that is what we did. What they did. His four perfect children, aged seven and seven, ten, and thirteen. All taking turns with the shovel. One at a time, throwing dirt on the box in the ground that was their father.

Dearly beloved. We are gathered here today To get through this thing called life . . .

From ALL OF THIS by Rebecca Woolf, and reprinted with permission from HarperOne, an imprint of HarperCollins Publishers. Copyright 2022.

All Of This: A Memoir of Death and Desire
Bookshop