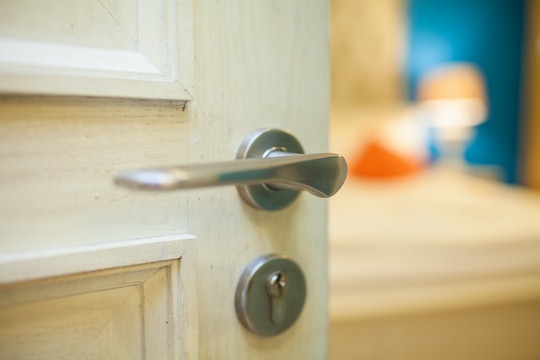 “He values his sleep and has one rule in the house that he enforces strictly, which is to not be interrupted while sleeping.”

Sleep is important, something parents know all too well. Enjoying an uninterrupted nap is one of those coveted pleasures from pre-kid life, so it’s understandable why one dad’s daily nap routine is going viral on Reddit. His wife recently shared in a post on the popular sub-Reddit group “Am I the A**hole” that her husband seems to prioritize his own sleep so much that she can’t wake him up in an emergency — and she decided to do something about it. After their son got hurt and her husband wouldn’t come out of his room to help, the wife removed his bedroom door lock.

The mom explained in her recent Reddit post that her husband stays up late at night to play video games, then demands a two-hour nap every evening after work “so he could both make up for lack of sleep and also be ready to stay up late to play with his console.” Apparently, this nap is so important to him that he locks his bedroom door.

“He values his sleep and has one rule in the house that he enforces strictly, which is to not be interrupted while sleeping,” the mom wrote. “He literally put a sign on the bedroom door saying ‘DO. NOT. WAKE. ME. UP.’ under any circumstances.”

Despite this ridiculous demand, which leaves his wife to take care of their 3-year-old son and 14-year-old daughter alone for two hours every evening, this is not actually the part the wife was upset about. She just wanted access to him in an emergency with their child.

Hot oil accidentally spilled on her 3-year-old son while his sister was cooking, she explained, which covered his hand and part of his arm. “I rushed to wake my husband up, I kept knocking but got no response, so I tried to open it, but it was locked,” she explained. His phone was also turned off, and he didn’t answer the door, so she asked a neighbor to drive them to the hospital. “I couldn’t waste more time cause my son was crying,” she said. “The neighbor took us to the hospital, and I couldn’t help feel livid the whole time.”

When they got home, her husband was upset and asked her why she didn’t answer his texts. “I blew up on him after I showed him our son’s injury and told him that I pounded on the door to wake him up, but he said had his earbuds on and didn’t hear a thing,” she explained. “I called him reckless and neglectful for ignoring a family emergency. He said I could say the same thing about myself for leaving our son unsupervised and causing him to get a burn.”

She decided to stop arguing and simply remove the bedroom door lock. “He started yelling at me saying I had no right,” she added, explaining that she refused to respond or engage him in the argument. “He didn’t stop complaining, calling me bossy, and saying that by removing the lock I’ve destroyed his peace and quiet and caused him sleep deprivation. He’s insisting I put it back, but I refused.”

Redditors were quick to comment their support for the wife. “He says ‘by removing the lock I’ve destroyed his peace and quiet.’ No, having kids did that. That’s part of being a parent. Too bad for him,” one commented.

Another called out the husband for not helping his wife with their kids. “It’s terribly convenient that he values his sleep, so he gets to go home, not lift a finger while you do everything, then he wakes up, gets on his console, and plays until late into the night. Like what is he even for?” The wife responded to that, saying in part, “Yes, he works long hours, but in my opinion, he’s become too obsessed with this gaming thing.”

Because emotions are running high, several users suggested the wife destroy or disable his video game console so he can’t play, but she said she doesn’t have access to it. “He hid it after we had a fight over him leaving the dogs out the entire night while playing games,” she wrote. “This was in December in cold weather. Now he keeps it locked in a storage box and carries the key in his keychain along with his car key.”

As a parent, the idea of “me time” is a lot different. And if that means giving up late-night video games so you can go to bed on time, not be tired after work, and take care of your kids, then so be it.

More Like This
This Underwear-Clad Mom Saved Her Pet Goose From An Eagle While Breastfeeding
Reddit Is Stunned By Mother-In-Law Trying To Breastfeed Her Granddaughter
This Mom Gave Birth On Graduation Day, So The University Brought Her Degree To Her
Lawmakers Passed Two Bills To Address The Baby Formula Shortage