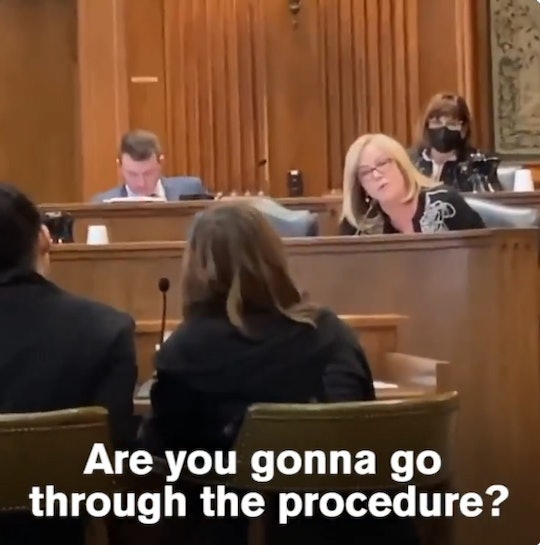 “You’re asking a 14-year-old on public record about genitals.”

Earlier this month, the Missouri State Senate began hearings on Senate Bill 781, which would prohibit anyone assigned male at birth from competing on girls and women’s sports teams beginning in middle school. Sen. Mike Moon, who sponsored the bill, and fellow Republicans have dubbed the “Save Women’s Sports Act.” Among those who spoke against the bill were 14-year-old trans rights activist Avery Jackson and their mother, Debi Jackson.

Though the hearing had nothing to do with trans children using bathrooms — another common legislative strategy for attacking trans rights — Sen. Elaine Gannon began questioning Avery, who is trans and non-binary, about trans people using women’s restrooms. “You’re in the ladies room,” she says, “and then you realize someone else is in there that doesn’t have a female’s... has a male body instead of a female’s body. I mean, it just causes some issues there.”

“No, it doesn’t,” Avery replied. “You should let people go to the bathroom.”

“Well they probably don’t realize because you have such long hair,” Gannon continued. She then asked Avery. “Are you going to go through the procedure?”

Presumably, she was referring to gender affirming surgery (which is typically only performed on adults). When Avery, though still collected and poised, expressed disdain at the question (“You think we’re going around forcing our genitalia in people’s faces: we’re trying to go to the bathroom!”) Gannon replied that she “was seriously just curious.”

Avery’s mother Debi told Vice that she squeezed Avery’s hand during the line of questioning, “almost in an attempt to have myself not jump up.”

“You’re asking a 14-year-old on public record about genitals and if people could see that,” she said. “Kids aren’t going around exposing themselves to kids wanting to play sports with their friends. That’s what this bill is. And getting wrapped up in genitals in bathrooms gets us so far from that, and it dehumanizes our children.”

“Avery was so poised taking on an adult during this moment and demanded an apology from the Committee Chair as soon as the hearing ended,” Debi shared on her Twitter account. (According to reporting from the St. Louis Dispatch, Gannon did apologized for her “inappropriate” questioning, though no word on whether the apology was general or to Avery.)

Legislation against trans rights, including access to pediatric healthcare, is not isolated to this one bill in Missouri. According to the Human Rights Campaign, 2021 broke records for anti-transgender bills and 2022 is on track to break that record. According to TransAthlete.com, SB 781 is one of more than two dozen states who have introduced anti-trans sports bans in 2022. Two states, Iowa and South Dakota, have passed such laws. The ACLU notes that even more states have similar bills still active from previous legislative sessions.

Avery told Vice that the fixation on trans people using bathrooms was frustrating. “It was never about sports,” Avery told them. “They really still — after all this time — wanted to go back to: ‘You want to go in the right bathroom? Nah.’”