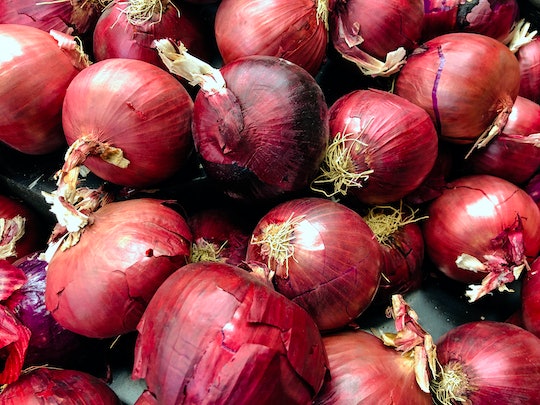 The U.S. Centers for Disease Control and Prevention (CDC) is urging anyone with unlabeled red, white, or yellow onions at home or who have onions imported from Chihuahua, Mexico, and distributed by ProSource Inc. to toss them ASAP. In a food safety alert issued Wednesday, the CDC linked a multistate Salmonella outbreak to imported fresh whole onions distributed by ProSource Inc.

“Do not buy or eat any whole fresh red, white, or yellow onions if they were imported from Chihuahua, Mexico and distributed by ProSource Inc.,” the CDC said in its alert, noting such onions may have stickers or other packaging on them indicating their distributor and where they were grown. “Throw away any whole red, white, or yellow onions you have at home that do not have a sticker or packaging. If you can’t tell where the onions are from, don’t buy or eat them.”

The CDC also cautioned families to wash any surface or container any such onion may have come into contact with using hot soapy water to limit the spread of Salmonella.

According to the CDC, at least 652 people ranging in age from 1 to 97 years old were sickened by Salmonella in 37 states from May 31 to Sept. 31. While no deaths have been reported so far, at least 129 people have been hospitalized as a result of the outbreak.

Interviews with sickened individuals revealed that 75% of them ate or possibly ate either raw onions or a dish that likely contained raw onions. Additionally, the CDC said many individuals reported eating at the same restaurants — restaurants that all got their onions from ProSource Inc.

ProSource Inc. told the CDC it last imported onions from Chihuahua on Aug. 27. However, due to onions' long shelf life — roughly three months — the CDC has warned they may still be in homes and businesses. Investigators with the CDC and the Food and Drug Administration are currently working to determine if onions distributed by other suppliers could also be linked to the outbreak.

But this isn’t the first time contaminated onions have caused a Salmonella outbreak. According to CNN, red, white, yellow, and sweet onions from Thomson International Inc. sickened at least 640 people from 43 states with Salmonella in August 2020.

Symptoms of Salmonella include diarrhea, fever, and stomach cramps and typically appear sometime between six hours or six days after a person has ingested the bacteria. While a majority of individuals will recover on their own within four to seven days, children under the age of 5, adults over the age of 65, and people with weakened immune systems may experience more severe illness and require medical treatment or hospitalization. Anyone experiencing symptoms of Salmonella infection is urged to contact their healthcare provider right away.