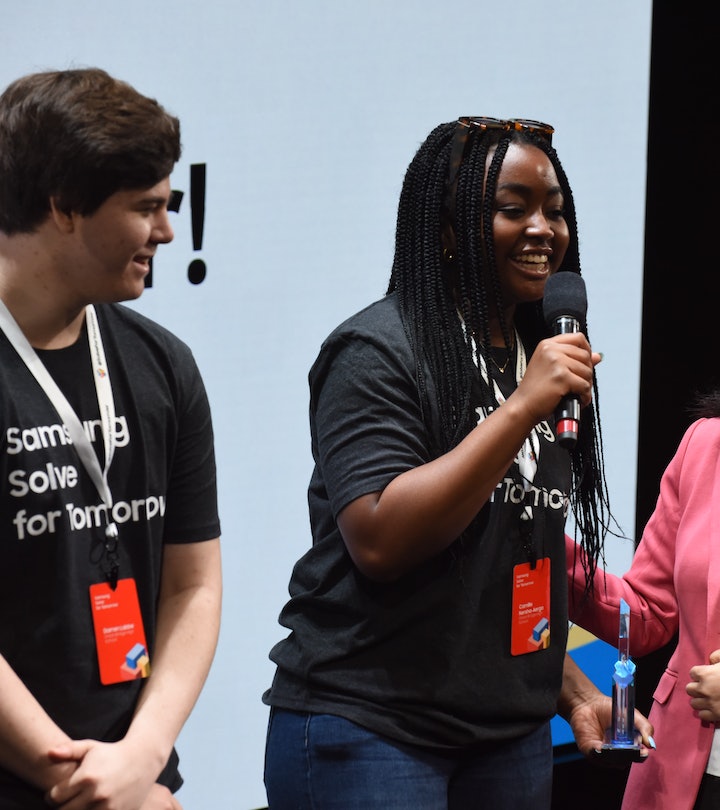 The future is in good hands.

Lots of kids want to be inventors: I went through a brief phase of try to “invent” a robot that cleans (I think I got about as far as writing “robot that cleans” on a piece of paper). But then there are those who actually have the skills and perseverance to turn their ideas into reality. On April 25, at Samsung’s flagship store in Chelsea, Manhattan, 10 groups of public school students from around the country presented their inventions to a panelist of judges at Samsung’s “Solve For Tomorrow” contest. These students were the finalists in a field of competitors that included hundreds of schools from around the nation. These students had advanced through several rounds of competition and were in the finals of what has become an extremely competitive contest.

This year marks the 12th anniversary of the “Solve for Tomorrow” contest. The contest “challenges public school students in grades six through 12 to use STEM skills to address a real-world problem in their community,” Ann Woo, Senior Director of Corporate Citizenship at Samsung Electronics America, tells Romper via email. “What began as an environmentally-focused competition has transformed into a multi-dimensional, problem-based learning initiative that fosters critical thinking and creative problem-solving skills, while promoting the positive impact young minds can have on their own communities.”

The inventions presented included a device to help children who have prosthetic limbs ride bikes, a method to cut down on toxic algae in water, and a device to help cut down on distracted driving. Several groups presented inventions that will help communities limit carbon emissions and adapt to the reality of our rapidly-warming world. For instance, students in Las Vegas created bricks that can be used to make bus stop benches that won’t heat up as much in the scorching sun.

Listening to the teens talk, you might feel all kinds of things — inspired, excited, and impressed — but one thing you probably won’t feel is smart (unless the phrase “to make sure that the nano particle-covered zeolites are being used to the fullest extent, a rotating mechanism will be added to the backs” rolls off your tongue the way it does for these competitors).

What problems do students address through Samsung’s “Solve for Tomorrow” contest?

Woo has seen year after year how students respond to the most pressing needs of their communities. “The Samsung Solve for Tomorrow Contest has shown us year after year the most critical issues facing our nation are top of mind for middle and high school students,” Woo tells Romper. “For instance, last year, we saw projects addressing the COVID-19 pandemic including solutions to improve contact tracing in schools, combating isolation through an app that connects students with seniors, and automatic door opening and locking systems.”

In addition to teaching kids about STEM — and they definitely learn a lot — the contest can have other benefits. It has “helped some kids really come out of their shell,” says Kristin Stea, a teacher at Oceanside School # 5 in Long Island, New York, the only elementary school to advance to the finals of the competition. She gestured to one of her students who had been confidently explaining how his team’s invention would help kids with limb loss safely enjoy bike riding with their prosthesis. Previously, she said, that student had been shy and hesitant to contribute.

Stea said that she told her students that “just by being here they are winners” — an absolutely true statement for the 10 groups of students in the finals In order to be on the stage at all, these tens schools beat out hundreds of competitors. This year, three schools won the top prize of $100,000 in technology for their classrooms: Princeton High School, in Princeton, New Jersey which created a solution for to address their city’s food waste, Porter High School in Porter, Texas who presented an evacuation system to help mitigate crowd stampedes, and Great Bridge High School in Chesapeake, Virginia, which created a solution to address the school bus shortage.

How Can Teachers and Students Participate Next Year?

Next year’s Samsung Solve for Tomorrow application period opens to 6-12th grade teachers across the country this fall. For more information on the program, follow @SolveForTomorrow on Instagram or visit www.samsung.com/solve.

More Like This
12 Last-Minute Vacation Spots For Memorial Day
When Is National Brother's Day?
From Captions To Gifts, These Are All The Kindergarten Graduation Ideas You Need
Celebrate The Class Of 2022 With These Festive Graduation Car Decorations