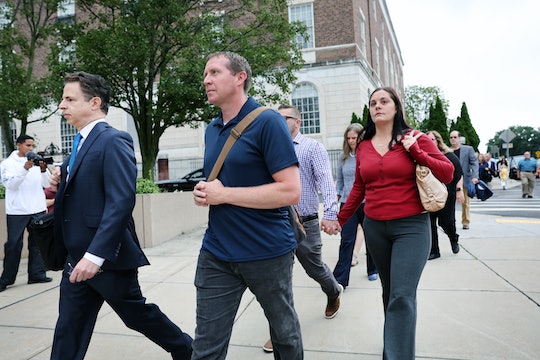 A jury has found that the InfoWars host’s lies have cost him $965 million in this latest defamation suit.

On Wednesday, a Connecticut jury ordered InfoWars’ Alex Jones to pay families of victims from the 2012 massacre at Sandy Hook Elementary school, and an FBI agent who responded to the tragedy, nearly $1 billion. For nearly a decade, Jones has repeated baseless claims that the shooting (and, by extension, the deaths of the victims) never happened and that the grieving families and first responders were hired actors complicit in a plot to take away people’s guns. His lies have cost him $965 million in this latest defamation suit, which an August ruling that ordered he pay another Sandy Hook family $49.3 million for similar damages.

Sums were awarded to each plaintiff — eight families of victims plus now retired FBI agent William Aldenbrg — ranging from $120 million to $28.8 million. For weeks, victims of Jones’ slander testified how the radio host’s conspiracy theories, and the listeners who believed him, have caused them pain and harm over the years, ranging from emotional distress caused by hateful emails and messages online, pictures of dead children sent in the mail, in-person confrontations (including at their own homes), desecration of their children’s graves, and threats to their physical safety.

Alissa Parker, mother of Emilie Parker, 6, testified to threats she began receiving just days after her daughter’s murder, prompting the family to have a closed-casket funeral for fear someone would photograph their child’s body and use it to promote further conspiracy theories. Erica Lafferty, daughter of school principal Dawn Hochsprung, testified to rape threats she received over the years.

In a press conference outside the Connecticut Superior Court in Waterbury, Connecticut, some of the plaintiffs, along with the lead lawyer on the case, Josh Koskoff, made statements about the ruling, with many thanking the jury not only for their decision but for bearing witness to the pain they’d endured over the past decade.

“The truth matters,” Lafferty said. “And those that profit off of other people’s pain and trauma will pay for what they have done.”

“I have always believed in the goodness of people,” said Nicole Hockley, mother of 6-year-old Dylan Hockley. “And when I just started engaging with followers of Alex Jones back in January 2013, I was looking for the good and I didn't find it, and I gave up until I decided to fight.” The ruling, she says, has helped to restore her faith in the goodness of humanity, she says, and says that it sends the message that “good does prevail.”

Jones was not present as the jury delivered their ruling, but reacted to the news in real time on his show. He has described the proceedings as a “show trial” and “kangaroo court” court. He further alleged, during his reaction that there “ain’t no money” to pay this sum. (He went on to ask his audience to donate money to “fight this fraud.”) While experts testified that, indeed, Jones’ wealth is not enough to be able to pay the more than $1 billion he has been ordered to pay in various suits, the plaintiffs also allege that Jones has downplayed his assets, fabricated debt, and moved assets in order to avoid avoid compensating families. (His lawyer, Norm Pattis has said they will appeal.)

However, Robbie Parker, father of Emilie, said during the press conference that actually receiving financial compensation is not the most important aspect of this trial. “What we got out of [the trial and verdict] meant more than anything anybody could ever give us.”

“Going forward,” said William Sherlach, widower of Sandy Hook’s school psychiatrist Mary Sherlach, “because unfortunately there will be other horrific events like this, people like Alex Jones will rethink what they say.”

More Like This
Over 10,000 Sippy Cups & Bottles For Toddlers Recalled Due To Lead Poisoning Hazard
Hero Who Tackled Colorado Gunman Was At Nightclub With Family To See Drag Show
This Year's White House Holiday Decor Features Wooden Cutouts Of The Biden Family's Pets
Biden Is Hosting A White House Wedding For His Granddaughter Naomi