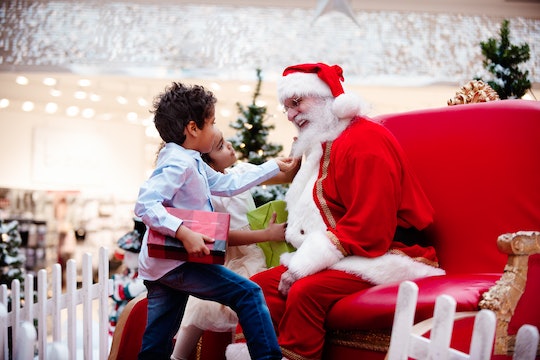 A Santa Shortage Could Make It Harder For Kids To Get A Sit-Down With St. Nick

Cities across the country are reporting a shortage of Santas, which could make it harder for families to arrange traditional visits ahead of Christmas.

Children across the country may find it harder to nab some one-on-one time with Santa Claus this year thanks to a shortage of Santas. It seems concerns about Covid-19 coupled with recent labor shortages have left some malls and holiday events scrambling to find Santas as fewer individuals seek to take on the role of Jolly Old Saint Nick.

While Santa bookings are on the rise this year, many agencies have reported having fewer people to send out in Santa roles. Mitch Allen of the Hire Santa staffing agency told the Wall Street Journal his company had so far seen a 121% increase in requests for Santas compared to 2020, a year when surging Covid-19 cases canceled many in-person events. But according to Allen, Hire Santa has 15% fewer Santa professionals to send out.

Allen isn’t the only one struggling to fill Santa roles. In September, Rick Rosenthal told WSBTV in Atlanta, Georgia, that his Santa staffing agency had already run out of Santas in September — roughly two months before the agency traditionally finds itself unable to fulfill every request for Santa it receives. According to Rosenthal, agencies have struggled to find an adequate number of Santas for years, but 2021 is shaping up to be the worst year yet.

“It’s just been mounting up every year. This year it’s going to be worse,” WSBTV reported Rosenthal said. “Our agency, which has hundreds of Santas, is already out of Santas for two days. They are weekend days, but we usually don’t run out of Santas until the middle of November on any day.”

In San Jose, California, an annual holiday event could find itself without a Santa to greet children due to a shortage of volunteers. According to KTVU, Christmas in the Park organizers have said they’ve found it harder than normal to find Santas this year, potentially jeopardizing the event’s free Santa visits. Organizers told the news outlet individuals who’ve previously volunteered to play Santa have opted not to return largely due to concerns about having to interact with large numbers of potentially unvaccinated children.

Allen also attributed his staffing agency’s difficulties in filling Santa roles to health concerns about close contact with unvaccinated young children. According to the Wall Street Journal, only half of requested Santa events included social distancing, which the U.S. Centers for Disease Control and Prevention (CDC) has continued to recommend as a way to limit the spread of Covid-19.

But while a Santa shortage may make in-person visits harder to come by, multiple companies like Santa’s Club, Zoom Santa Claus, and Sealed by Santa do offer virtual Santa visits through live video calls.