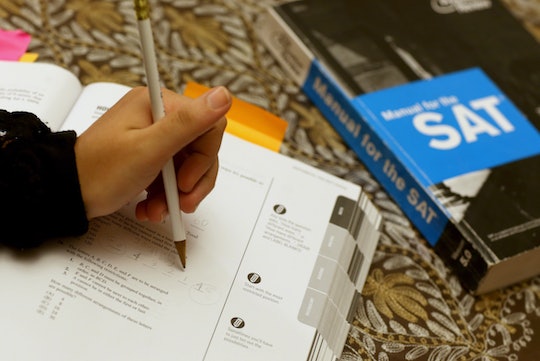 SAT Test Will No Longer Include Subject Tests & Optional Essay

The organization behind the SAT says the changes are an effort to ease test-taking demands on students but critics aren't convinced.

College Board, the non-profit organization that creates and administers standardized tests like the Scholastic Aptitude Test (SAT) and Advanced Placement (AP) exams, has announced major changes to one of its most popular tests. In an effort to keep up with a changing college admissions process, SAT tests will no longer include subject tests and the optional essay section, College Board announced Tuesday. Beginning immediately, students currently registered to take an SAT subject test in the United States will automatically have their registration canceled and any fees paid refunded.

"As students and colleges adapt to new realities and changes to the college admissions process, College Board is making sure our programs adapt with them," the nonprofit said in a press release put out Tuesday. "We’re making some changes to reduce demands on students."

College-bound high school students have been taking the SAT since 1926, according to PBS. But while the traditional SAT consists of just two sections — a math component and a reading and writing component — students have long had the option to take additional tests in other subjects. Until now, College Board offered 20 different SAT Subject Tests spanning five subject areas: English, history, languages, mathematics, and science.

But according to The New York Times, critics have questioned College Board's claim of dropping the SAT Subject Test in an effort to reduce the demand being put on students. Instead, they see the removal of the subject tests as a way of heightening the importance of the Advanced Placement (AP) tests College Board also administers.

But subject tests aren't the only changes coming to the SAT. On Tuesday, College Board also announced plans to discontinue the optional SAT Essay as of July 1, noting that students can still take and register for an SAT Essay test through the June test date. Once the final administrations of the optional SAT Essay test have taken place in June, however, the test will be made available only to students who reside in states where the SAT Essay is a required part of SAT School Day administrations, the College Board noted.

"Writing remains essential to college readiness and the SAT will continue to measure writing and editing skills, but there are other ways for students to demonstrate their mastery of essay writing," College Board said. "The tasks on the SAT Reading and Writing and Language sections are among the most effective and predictive parts of the SAT."