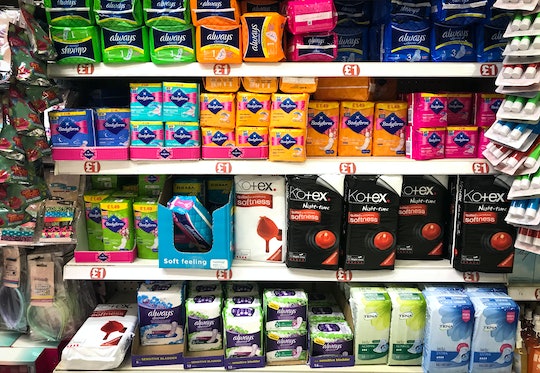 The country is setting a message that access to free menstrual products is a universal right.

On Aug. 15, the Period Products Act went into effect in Scotland, making it the first country in the world to make access to free menstrual products a universal right.

“Women, girls and people who menstruate should never face the indignity of period poverty,” tweeted Monica Lennon, a Labour MSP who introduced the bill. “Proud that we are making period dignity for all a reality.”

The implementation of the act has been years in the making; Lennon introduced the bill in 2019 in an effort to tackle period poverty head on. It was unanimously voted into law in November 2020. “A proud day for Scotland,” Lennon tweeted at the time, “and a signal to the world that free universal access to period products can be achieved.” In accordance with the law, local councils and education providers will provide the free items to those who need them — with no means testing required.

The Edinburgh Evening News highlights that this is just the latest example of Scottish Parliament finding consensus on public health issues, from smoking bans in public places in 2004 (one of the first places in the world to do so, particularly at a national level) to the Minimum Alcohol Pricing Act of 2012, to their emulation of Finnish “baby boxes” distributed to new parents.

Data from Scottish government statistics illustrate that this act has become increasingly necessary since the recession of 2008, as relative poverty levels in Scotland have been slowly rising. In 2014, a million Scots (approximately 20% of the population) were living in poverty. Additional data from the Trussell Trust, cited in Lennon’s bill, show that food bank use in Scotland is rising at a rapid pace and that there is an increasing demand for menstrual products among Scots who utilized food bank services.

Unfortunately, this is not an issue relegated to Scotland. In the U.S., an estimated 16.9 million menstruating people experience period poverty annually. Two thirds of low-income women can’t afford adequate menstrual products, many having to choose between food and basic sanitary supplies, according to research published in Obstetrics and Gynecology. Another survey conducted by U by Kotex found that a third of respondents report having missed school, work, or appointments due to lack of menstrual products, and indicated that the Covid-19 pandemic appeared to make access issues even worse.

In an effort to combat period poverty in the U.S., New York Congresswoman Grace Meng has introduced the Menstrual Equity for All Act, a bill that would expand access to to period products throughout the country. But while the bill has 98 co-sponsors, it has not moved past an introduction in the House. Dozens of menstrual equity laws have been enacted at the state level since 2014, yet movement at the federal level has been glacial and largely partisan — all of Meng’s co-sponsors are fellow Democrats.

But for women, girls, and other menstruating folks in Scotland, access to sanitary products has now been expanded as never before and, perhaps, will inspire other governments to take action. “Proud of what we have achieved in Scotland,” Lennon said on Monday, the day the Act was implemented. “We are the first but won’t be the last.”

More Like This
How To Help Families Impacted By Hurricane Ian
Iranian High Schoolers Remove Hijabs To Protest The Government
Barack Obama Says He "Won The Lottery" When He Married His Wife Michelle 30 Years Ago
Lifelong Teacher Dr. Jill Biden Loves Watching Abbott Elementary Too