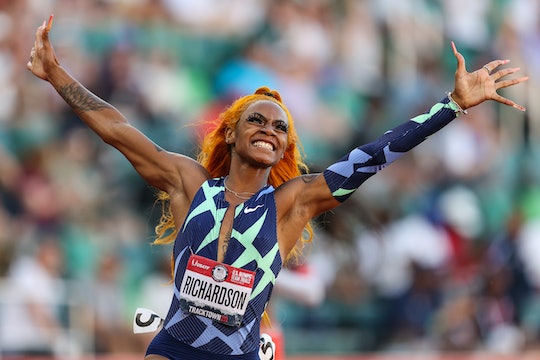 “To cross the finish line and run up the steps to hug her knowing I'm an Olympian, actually that's probably better than winning the race.”

When she realized that she had fulfilled her dream of becoming an Olympian, placing first in the women’s 100 meter at the Olympic trials in Oregon, Sha’Carri Richardson hugged her grandma, Betty “Big Momma” Harp.

The 21-year-old runner out of Louisiana State University told the Associated Press that it was the best part of the night. “To be able to have her here at the biggest meet in my life, and to cross the finish line and run up the steps to hug her knowing I'm an Olympian, actually that's probably better than winning the race.”

Richardson qualified with a 10.86 second time. Her previous time that weekend of 10.64 seconds, which was discounted due to wind-assistance, has some suggesting that she stands a chance against the current world champion Shelly-Ann Fraser-Pryce of Jamaica. Fellow runners Javianne Oliver and Teahna Daniels also qualified and will join Richardson in Tokyo. She will also be competing in the 200-meter later this week.

“Being happy is an understatement,” she told NBC’s Lewis Johnson, winded, happy, and emotional. Her joy is made more poignant by the adversity she’s struggled to overcome in the past year; she shared that her biological mother died only a week before. “I’m still here... still choosing to pursue my dreams, still coming out here, still making sure to make the family that I still do have on this earth proud,” she said.

“The fact [is] nobody knows what I go through,” she went on to tell Johnson. “Everybody has struggles and I understand that, but y'all see me on this track and y'all see the poker face I put on, but nobody but them [referring to her fellow athletes] and my coach know what I go through on a day-to-day basis.”

Richardson said her family has helped her feel “grounded,” and it’s a love and support that was made visible after the race: just look at that absolutely amazing grandma hug. We can feel it through the screen!

“Without my grandmother there would be no Sha’Carri Richardson,” she told Johnson. “My family is my everything.”

If she wins in Tokyo, her first Olympics, Richarson will be the first American woman to win the 100-meter since 1996. The all-time record for the event was set by Florence Griffith-Joyner, aka Flo-Jo, in the 1988 Olympics in Seoul. Richardson has drawn Flo-Jo comparisons, as both women are noted not only for their incredibly athletic ability, but flamboyant personal style. We can’t wait to see her (and Big Momma!) in the future!