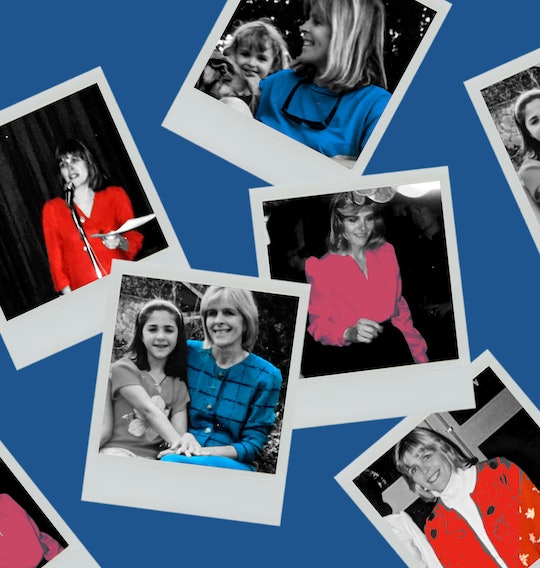 Here’s To The Shoulder-Pad Moms

Nerves of steel in pillowy packaging.

Sometimes I wonder if history will repeat itself and future generations will know the glory of the shoulder-pad moms, or if they were just a shooting star, here for a moment then gone forever. But shoulder-pad moms — their necklines high, their hair higher; their lipstick a shade of pink that doesn’t quite match anything — were a different breed. They were something specific, more than just a sign of the times. I know because I had one.

If you grew up in the ‘80s, or even the ‘90s like I did, you might’ve had one too. This meant that I saw my mom’s wardrobe enter a room before she did. Wild, oversized graphic tees faded from wear, silk blouses with waterfall bows, embroidered vests adorned in brooches. If a print looked like it belonged on a Solo Cup, it could be found on a pair of her shorts.

Around us at home, my mom’s clothing choices were more about substance than style, more about what she was doing than who she might be seeing, and she had us doing a lot. On my first trip to Disney World at age 7, for instance, I was told, “Anything you want to get needs to be hand-held and mobile, including food.” She said this while letting her sunglasses hang loose on a rope around her neck. Two elephants rested under palm trees on her giant thrifted sweatshirt. “There’s just too much to see to sit down.” (This is prime shoulder-pad mom behavior.)

Sometimes, I’d slide open her closet door when she wasn’t there just to see them, a fleet of stiff-armed soldiers: suits, jackets, and matching skirts all in a row, some still wrapped in a cleaner’s bag like candy.

If there was an event, a holiday, or party, I witnessed magic. I saw my mom grow a few inches taller, watched her form become sharper. She’d zip up, pull up, button up, and suddenly be painted in swaths of bold hues or vibrant pastel colors. Before starting her school day as an English teacher, she’d don her uniform as I did mine. Sometimes, I’d slide open her closet door when she wasn’t there just to see them, a fleet of stiff-armed soldiers: suits, jackets, and matching skirts all in a row, some still wrapped in a cleaner’s bag like candy. Solids, patterns, and various textures with buttons so large I could see my reflection. No piece looked the same; there was no singular style or brand, but everything did have a little extra padding at the shoulders. I can still feel my fingers fluttering over their flat tops like piano keys.

I was in absolute awe of her clothing, but I also knew her style wasn’t like everyone else’s, and when you're a kid you think that’s a problem. By middle school in the early 2000s, looking out into a sea of mothers at a school function I could pick her out immediately. Among the denim jackets and Abercrombie & Fitch tees, there was always a pair of square shoulders. At friends’ houses, moms would ask if we were having fun through smacks of gum, their thumbs hooked through low-rise belt loops. Every dip and curve was smooth and tight.

It didn’t help that back then, a lot of media geared to young people focused on how clueless and embarrassing parents were, with a laugh track behind them at all times. The horrific zoom on the mom before Lizzie screams out that she wants a bra is a wonderfully engrained example of the popular mother-daughter perspective. I thought I was supposed to be embarrassed of my mom, too. One night after watching too many episodes of our then-favorite show What Not To Wear, I dove into my mom’s closet and pretended to be the host, Stacy London. We laughed until our sides hurt as I pulled out piece after piece and gave my full critique. Like a good mother, she took nothing to heart. She considered what I had to say and wanted to be on-trend for me. To this day I regret pushing her into the rushing stream of sameness, the one my young self was drowning in. I never saw some of those pieces again.

Now, we look back at this time as a pinnacle of fashion, with Instagram accounts dedicated to “‘90s vibes,” “old” family photos, and items so nameless, like my mom’s giant elephant sweatshirt, they might truly be lost to the past. I thought she was behind, but my mom was ahead of her time. I don’t think she’d care even if she had known — that’s sort of what being a shoulder-pad mom is all about.

To say she was ‘putting on appearances’ makes it sound as though she was hiding; on the contrary, she was living.

Now, I know there was a lot more going on behind her brass buttons than I could realize back then. She was going through a lot physically and emotionally, forced to make life-or-death decisions about my dad’s medical care for years, up until his death two years ago. Despite this, my mom never missed a chance to get dressed up; never once let her tights run or her hair fall flat. She’d always RSVP yes. To say she was “putting on appearances” makes it sound as though she was hiding; on the contrary, she was living. Letting herself be so seen, during so much hardship, was probably the most extraordinary thing she could have done. She was, somewhat literally, a pillar of strength. Maybe that little extra padding gave her just the lift she needed.

While I still talk to my mom on the phone every day, I see her face in the mirror as I button up my own blazers before work; my rounded upper arms transforming into sharp corners. Will I be a shoulder-pad mom? I wonder as I look at my array of bulging hangers. In these moments, I recall another vacation with my mom to London when I was very small. Anytime we met someone new, they would bend down to my eye level and ask, “What’s your name, little girl?” After I told them, they’d shoot her a small knowing look. Finally I asked her, “Why do they do that when they hear my name?”

She laughed, swaying our linked hands as we walked. She was wearing something silky, and it fluttered in the breeze. “Oh, they think I must’ve named you after the princess.”

I remember looking up at her then, her shoulders high, the sun shining in her short blonde hair. It was no wonder, when she looked like royalty herself.