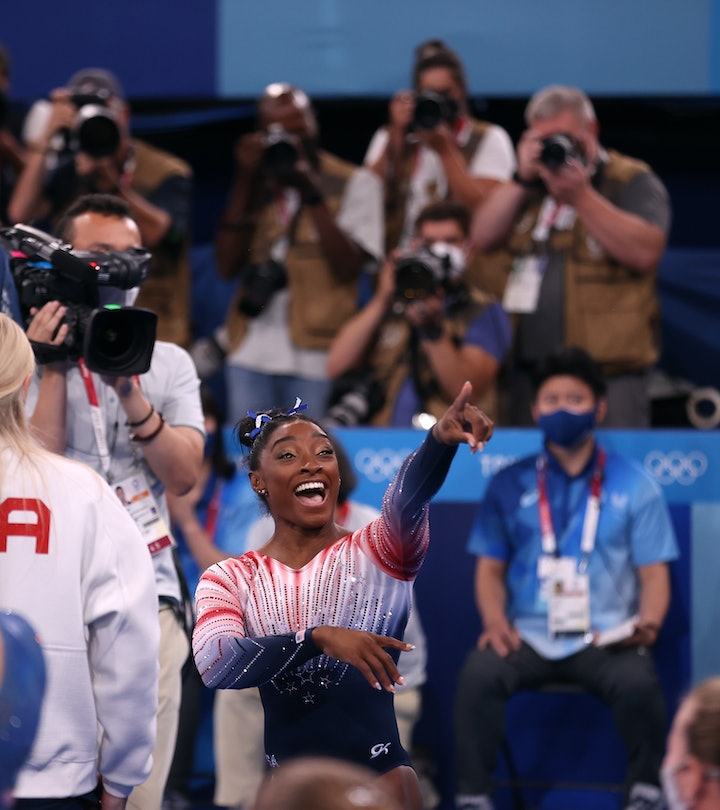 While competing in the women’s balance beam final, Biles spotted her pups Lilo and Rambo cheering her on.

Without the presence of family or friends cheering them on in the stands, the Tokyo Olympics has, at times, felt lonely for athletes. That potential loneliness is largely what drove one entertainment news anchor to carry out one of the most clever stunts seen so far at the Summer Games. To help one of the most decorated gymnasts of all time find a familiar face in the stands during the women’s balance beam final, Access Hollywood’s Scott Evans held up cardboard cutouts of Simone Biles’ dogs.

“We just wanted to makes sure Simone felt the love,” Evans told the entertainment news show. “Who loves you more than your pups? Since they couldn’t be there… we brought em!”

Both of Biles’ French bulldogs are adopted, according to PopSugar. Lilo, who was born in November 2017, was adopted by Biles in February 2018, while Rambo, who was born in January 2020, joined the family in May 2020. They’ve since taken Instagram by storm, garnering some 78,000 followers through their @thebilesfrenchies account.

Cameras caught Biles’ look of pure joy when she spotted Lilo and Rambo’s faces in the crowd Tuesday. Beaming, the gymnast pointed into the stands as if in disbelief at what she was seeing. “Her reaction was everything,” Evans said.

Of course, watching Biles return to competition in Tokyo during the balance beam final was special for Evans too. “To be there watching this moment in person is something I’ll never forget,” he told Access Hollywood. “Simone on that beam was a triumph. My heart was pounding with every move. When she dismounted that beam I finally took a breath. What they do up there is incredible. She and Sunisa represented the U.S. and themselves so well.”

While Biles has yet to comment publicly on Evans’ gesture, it seems safe to say it was something the 24-year-old gymnast appreciated. Ahead of the Tokyo Games, Biles opened up about the nerves she was experiencing about not being able to look up in the stands and see her family. “It’s definitely going to be weird not having my family there because they’ve never missed a competition,” she said in an episode of Simone vs. Herself Facebook series. “I'm kinda nervous that I might freak out over that.”

Biles, who ultimately removed herself from four Olympic events in Tokyo due to a case of what gymnasts refer to as “the twisties,” explained she often did not feel “set and comfortable” for competition until she finds her parents in the crowd. “It calms me down to know that they’re in the arena,” she said. “I think what I'm going to do is just try not to locate them in the crowd.”

Although Biles’ parents couldn’t be there to cheer her on in person, Evans may have managed to supply the next best thing: her dogs.