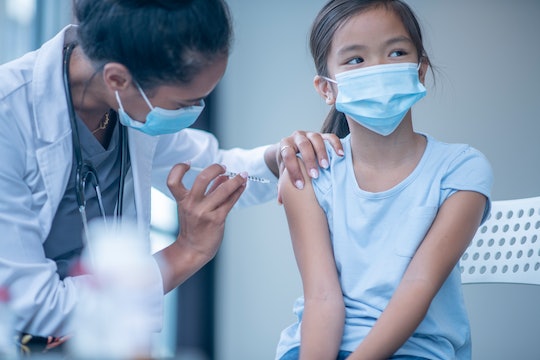 Covid Vaccine Needles For Kids Will Be Different — Here’s Why

It’s not just about little shots for little arms, but part of the plan to increase vaccination rates among children.

In the coming days, the FDA’s independent advisory committee will meet and is expected to recommend the Pfizer vaccine for Emergency Use Authorization in children ages 5 to 11. With approval on the horizon, the White House has announced plans to get kids vaccinated... and, interestingly, smaller Covid vaccine needles are a big part of it.

Why Will Smaller Needles Be Used For Kids?

It’s not to reassure kids (and their vicariously suffering parents) that vaccination will only require a little needle — though, certainly, it’s a nice fact to have in one’s back pocket while calming a nervous kiddo. It’s also not necessarily to correspond with the smaller dose children will receive — 10 micrograms compared to the 30 in vaccines for those 12 and older. But the needle size — smaller than those used in adult vaccinations — can be more easily stored by smaller facilities, like doctor’s offices, as The New York Times reported.

Shipments can be sent to a doctor’s office in packages containing 100 doses each , and can be stored up to 10 weeks at standard refrigeration temperatures, and six months at colder temperatures, the White House said in a statement on Oct. 20. So whereas many vaccinated adults likely went to specially set-up vaccine clinics to receive their shot(s), children will be more likely to get vaccinated in the familiar comfort of their pediatrician’s office.

The Biden Administration announced that it has worked with states to enroll more than 25,000 pediatric and primary care providers to serve as vaccination sites. And that, the administration hopes, will make a difference when it comes to overall vaccination rates. “Pediatricians, and other doctors, are some of the most trusted sources for families when it comes to COVID-19 vaccines for children,” the White House said in a statement. “These providers will play a critical role in the nationwide effort to get children vaccinated.”

In other words, families will want to talk to their child’s doctor to explain vaccination, address concerns, and allay fears they might have.

Of course, the initiative does not stop and end at the pedi. As with adult vaccinations, kids will also be able to receive their shot at other locations, as the Administration has partnered with children’s hospitals and health systems, schools, pharmacies, and community clinics. An education initiative will be launched by Health and Human Services to reach out not just pediatricians but to schools, state and local health departments, and community and faith leaders in order to ensure “parents have the information they need to make informed choices for their families.”

Last week, children made up more than 25% of new Covid cases, despite representing 22% of the population, according to data collected by the American Academy of Pediatrics. Though death or hospitalization from Covid-19 is extremely rare in patients under 18, according to the Centers for Disease Control and Prevention, more than 700 children have died from the virus. A Gallup poll in September suggested that approximately 55% of parents were in favor of vaccinating their children, a number the Biden Administration would seek to increase with this “smaller needles” initiative.

More Like This
What PICU Means & What To Expect From A PICU Stay
New Report Shows 80% Of Pregnancy-Related Deaths Are Preventable
'Squid Game' Is Coming Back For Season 2 On Netflix: Here’s What Parents Need To Know
The Difference Between The PICU & The NICU