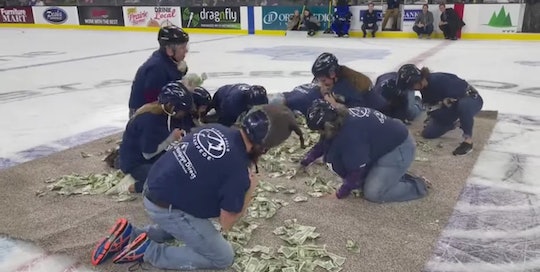 Watching teachers scramble around, frantically trying to grab as much cash as they can for their classrooms isn’t the hilarious entertainment one South Dakota hockey team hoped it might be.

A junior ice hockey team in South Dakota has made headlines around the world after they organized a “Dash for Cash” event in which they asked local teachers to scramble on their hands and knees grabbing as many $1 bills as they could stuff into their clothing. Although the event was meant to benefit educators, who were going to spend the money on their classrooms and students, many have condemned the spectacle as demeaning to teachers.

“This is horrible. We call [educators] heroes and treat them like court jesters?” one mom noted of the Sioux Falls Stampede’s recent Dash for Cash event on Twitter. “If we as a country cared about education, this would not happen.”

During a break in the Sioux Falls Stampede’s Saturday game against the Tri-City Storm, 10 local teachers were welcomed onto the ice in tennis shoes and helmets. On the other side of the rink, organizers dumped $5,000 in $1 bills onto a piece of carpet. After scurrying across the ice, the 10 educators were then given a limited amount of time to scramble around on their hands and knees grabbing as many of the bills as they could.

But this wasn’t a scavenge for personal gain. According to the BBC, all participating teachers said they would be spending whatever money they could grab on supplies for their students. And it’s worth noting that a review of teacher salaries conducted by the National Education Association found that from 2019 to 2020 South Dakota paid its teachers one of the lowest average salaries in the country. In essence, spectators at Saturday’s game watched teachers who are already flagrantly underpaid and underfunded and often made to purchase supplies for students and their classroom out of their own personal funds scramble to secure much-needed resources for their students.

“It’s bad enough teachers have to beg for the most basic class resources or buy them with their own money, but to have them be humiliated like this for ‘fun’ is sickening,” one Twitter user commented.

Across social media, people questioned why educators were made to scramble and compete for cash as a means of entertainment. “If that cash was available to teach students in South Dakota what was the point in allocating it in this humiliating and haphazard way?” one father tweeted. “Are the people in charge there really this contemptuous of the value of their teachers?”

The South Dakota Democratic Party also denounced the event, noting it was clear proof the state needed to boost its funding of education. “It's clear that South Dakota needs to invest in education,” the political party tweeted. “Our teachers shouldn't have to compete to fund their classrooms.”

Amid mounting criticism, the Sioux Falls Stampede has apologized to the teachers involved in its Dash for Cash promotion. “Although our intent was to provide a positive and fun experience for teachers, we can see how it appears to be degrading and insulting towards the participating teachers and the teaching profession as a whole,” a statement issued by the hockey team on Monday read. “We deeply regret and apologize to all teachers for any embarrassment this may have caused.”

In an effort to remedy the situation, Stampede and CU Mortgage Direct, which partnered with the team to supply the $1 bills, have said they will give each of the 10 teachers who participated in the Dash for Cash an additional $500. Another 21 area teachers who’d applied to participate in the promotion, but were ultimately not selected, will also receive $500 each.

“We take our role in the community seriously and work hard to support area non-profit groups in a variety of ways,” the team said. “Moving forward, the Stampede and CU Mortgage Direct will continue to support our teachers and will work with the SD Teachers Association on future events that will provide funding for our next generation.”