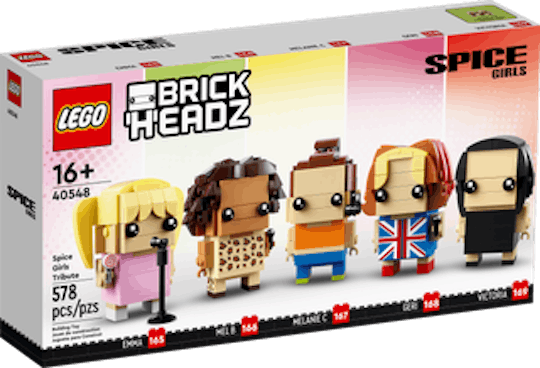 Like many elder millennials, nothing gets me out on the dance floor faster than the throaty cackle at the start of the Spice Girls’ iconic song “Wannabe.” The song takes me right back to a 5th grade sleepover, when each of us dressed up like our favorite spice and did a “photoshoot.” (For some reason, I decided that I could pull off Baby Spice’s super-high pigtails. Thank God social media didn’t exist yet.) Though our generation may never be able to convey the true power of those high platform shoes and catchy beats to our kids, at least we can bring the group back into our homes in LEGO form. On March 1, LEGO will unveil its LEGO BrickHeadz™ Spice Girls Tribute set.

Melanie Brown (aka Mel B, aka "Scary Spice"); Melanie Chisholm (aka Melanie C, aka "Sporty Spice"); Emma Bunton ("Baby Spice"), Geri Halliwell ("Ginger Spice"), and Victoria Beckham ("Posh Spice") became a pop sensation with the release of their first single “Wannabe” in 1996. “Wannabe” topped the charts in 37 countries, and their 1996 album “Spice” still retains the record for the bestselling album by a female pop group in history—more than any album by TLC, Destiny’s Child, or the Pussycat Dolls.

LEGO’s Brickheadz Style was first introduced in 2016, and has been used to bring all kinds of iconic characters to life, including IronMan, Han Solo, and Buzz Lightyear. This new Spice Girls set, however, is the first time that real people (larger than life though they may be!) have been made in the Brickheadz style. The set includes 578 pieces, and is marketed for ages 16+.

Each Brickheadz Spice Girl is instantly recognizable: Scary in leopard print, Baby in pink (with her pigtails, of course!), Sporty in a track suit, Posh in an elegant black gown — and, of course, Ginger in her Union Jack dress. (Luckily, this version of the Union Jack dress doesn’t cost quite as much as the original, which was the most expensive item of pop star clothing ever sold at auction.) The attention to detail is on point: Baby Spice has a pink lollipop in hand, and Sporty Spice has a microphone headset so she won’t get slowed down while dancing. The set includes both hand-held microphones and mic stands (so serious fans can also reenact each woman’s solo career, if so inclined).

“This is the first time we have created a music band in BrickHeadz form and what we really, really wanted was to capture the essence and nostalgia of the Spice Girls through their iconic looks. I am delighted with the set and I hope the fans are, too,” Daniel Squirrell, the designer of the set, says in a press release from LEGO.

The new LEGO set is coming out just in time for the 25th anniversary of the group’s 1997 movie Spiceworld. In his less-than-glowing review of the film, Roger Ebert suggested that The Spice Girls “could be duplicated by any five women under the age of 30 standing in line at Dunkin' Donuts.” True fans know that that’s nonsense — but now, they can be duplicated in LEGO form.

Get it for your kids and maybe they’ll be singing, “Mama, I love you!” Or just get it for yourself if it’s what you really, really want.