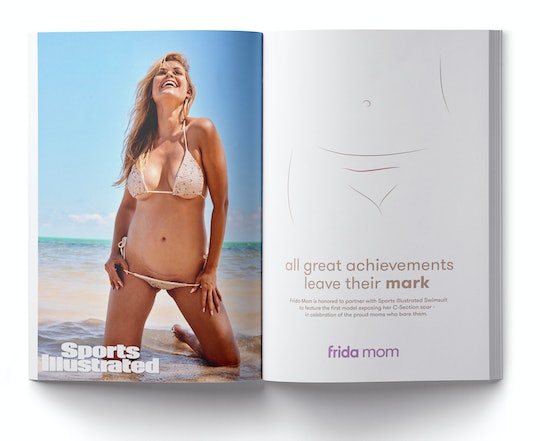 Kelly Hughes wears her C-section scar “like a badge of honor.”

The Sports Illustrated Swimsuit Edition has been an institution in print media for 58 years. For most of its history, the glossy pages featured a glamorous, but quite narrow, vision of female beauty. In recent years, however, the issue has made concerted efforts to be more inclusive. But while newer editions have featured a wider variety of models of different sizes, races, ages, we’ve never seen a model rocking a C-section scar... until now. After more than five decades, Sports Illustrated will feature its first model with a C-section scar.

Despite the fact that nearly a third of American babies are born via C-section, it’s rare to see evidence of cesarean birth anywhere. TV and movies that depict birth rarely show anything other than vaginal delivery. A C-section scar is solid evidence the procedure is common, but mostly tend to remain hidden. In the 2022 Swimsuit Edition, available on newsstands May 19, readers will see Kelly Hughes, a mom of a 3-year-old, bare her C-section scar.

The photo is part of the brand’s partnership with maternity-care company Frida Mom as part of their “Pay With Change” campaign, a new gender equity advertising initiative in which Sports Illustrated will accept advertising only from companies with demonstrated programs to advance gender equality and drive progress for women’s empowerment.

While Frida Mom has traditionally been known for its brutally honest depiction of new motherhood — commercials depicting breastfeeding and postpartum recovery — the photo of Hughes is done in Sports Illustrated’s distinct, glamorous (and very sexy) style, with Hughes rocking a string bikini on the beach.

In a statement, Frida Mom founder Chelsea Hirschhorn said the partnership provides a “valuable platform to disrupt the traditional narrative around women's bodies — especially those they feature who are mothers.”

“We're thrilled that Sports Illustrated Swimsuit appreciates the importance of highlighting these women authentically — C-section scars and all — and welcome the progress we will make together as a result of this shared commitment,” she added.

Hughes said in a statement that while her scar — the result of an unexpected C-section — was initially a source of insecurity, she now wears it “like a badge of honor” and is “thankful” to help normalize the idea of bodies changing through motherhood.

“The idea of being what you were before you had a baby for many is not realistic – we in a sense give birth to our new selves,” Hughes said. “It’s the journey that makes us who we are and that’s something to embrace and hold tightly no matter what stage we’re in. My son is now 3 years old, and I can proudly say today I look at my scar and it was all worth it and I would do it all over again.”