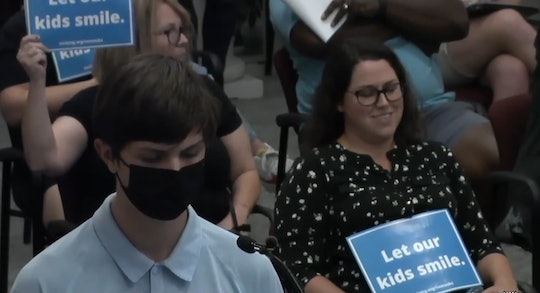 Tennessee Teen Speaks Out After Being Mocked By Anti-Mask Parents

“I hope they see this is really benefitting me and people who believe in masks all across the country.”

High school student Grady Knox of Tennessee went viral recently, not because of anything he did but for how he was treated by others. In speaking in support of a mask mandate for Rutherford County schools at a public meeting on Tuesday, Knox evoked the memory of his grandmother, a former educator who died from Covid-19 because, as he said, “someone wasn’t wearing a mask.” In response, anti-mask advocates in attendance laughed, rattling Knox. The teen recently appeared on CNN to respond to the incident and anti-mask parents, and address the need for masks in their schools.

Throughout the more than three-hour long school board meeting, commenters spoke for and against mandating masks in public schools in Rutherford. Knox, who wore a mask, addressed the board in favor of a mandate.

“If I get Covid, I'm going to bring it to my family, and I talk to my grandparents a lot; they’re higher risk than me, so I don’t want to give them Covid,” he said. “I’m worried about my family. This time last year, my grandmother, who was a former teacher at the Rutherford County school system, died of Covid because someone wasn't wearing a mask.”

At this, some, including unmasked attendees visible behind the speaker’s podium in the video of the meeting held signs reading “Let Our Kids Smile,” who had been seen scoffing and rolling their eyes at pro-mask sentiments earlier, laughed. Knox stuttered on his next words, and attendees had to be reprimanded by the school board, who told them to be “professional.”

“This is an avoidable issue and by not wearing masks in schools, it's irresponsible: we're killing people,” he continued, garnering another condescending look from an attendee visible on camera. He concluded. “This is not something that we should be doing for the education of our students.”

Speaking CNN’s Brianna Keilar, Knox said the event felt surreal. “My brain was just all over the place,” he said. “Because I can hear them behind me, but it felt like the two things weren’t connected, because I couldn’t understand why people would react like that to a statement I made that’s so personal.”

He went on to share that he’s observed students in his school are stressed over whether a call to the vice-principal, who conducts contact tracing, means they’ve been exposed to the virus and will have to quarantine. He also noted that some of his classes have, at times, only been half-full. “It’s spreading so quick,” he said gravely.

Though the now-viral moment was indeed jarring, Knox has found a silver lining in it all, and he wants the anti-mask parents who mocked him at the school board meeting to know that.

“I just hope that they see they’ve given me this chance now to speak in front of the entire nation and tell about how I believe masks are something that is really essential for schools to stay open,” he said. “I hope they see this is really benefitting me and people who believe in masks all across the country.”

Rutherford is Tennessee’s fifth most populous county where Covid has been on the rise since June. The county has recorded 54,731 cases of Covid and 475 deaths since the beginning of the pandemic. On Sept. 7, 2,135 new cases were recorded. The Daily News Journal reports that more than 10,000 students in the district have been quarantined due to Covid-19 exposure. As of press time, masks in schools remain optional.