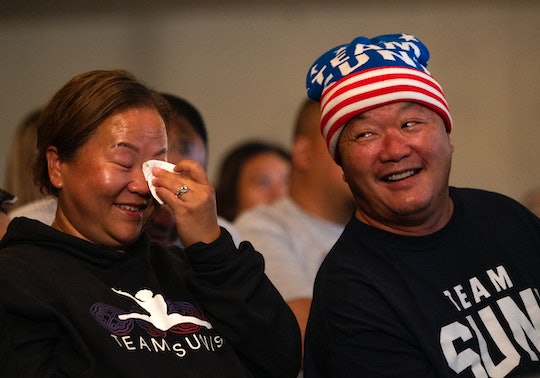 Suni Lee's Parents Are By Far The Olympian's Biggest Supporters

Surrounded by a huge crowd of dozens of family and friends in Minnesota, Sunisa “Suni” Lee’s parents sat quietly, anxiously, waiting for the scores to be read in the Women’s All-Around finals, where placing often comes down to fractions of points. When they realize that their girl had taken it all, the room erupts into cheers. Suni’s mother, Yeev Thoj, screams and claps. Her father, John Lee, simply raises his arm in victory. Many of their fellow watchers jump up and down cheering, giving the parents hugs and claps on the back as they sit, elated, smiling, and clearly very, very proud.

Suni is the pride of her community

Suni and her family are part of the vibrant and tight-knit Hmong community in St. Paul, where the Olympian was born and raised. Her parents both immigrated from Laos as children, per reporting from ESPN. Though Suni is the fifth American woman in a row to take gold in the All-Around finals, she is the first ever Hmong-American to represent the United States. Speaking to Elle with his daughter back in May, John said Olympic glory for Suni would be “the greatest accomplishment of any Hmong person in the U.S. ever.”

Suni is part of a large, blended family

Suni’s mother Yeev met John when Suni was 2 years old and have been together ever since. At the time, John was recently divorced with two young children of his own, Jonah and Shyenne (the latter of whom is only 12 days older than Suni). The pair went on to have three children together, Evionn, Lucky and Noah. Though Yeev and John never legally married, Suni chose to take his last name, a testament to their close relationship.

Speaking with TODAY’s Craig Melvin ahead of her win, John was asked what it takes to raise an Olympian. He modestly replied, “I talk to her, I motivate her, but the real secret is: I think it's her. I think she's pretty natural."

Natural though she may be, Suni has credited her dad with helping her achieve her Olympic dreams. Elle reports that when Suni was little and the family couldn’t afford a real balance beam for her to practice on at home, John made one for her out of an old mattress (he told Melvin that it remains in the back yard to this day). He also taught her how to do her first backflip.

Tragedy struck the family in 2019

Two days before Suni was to compete at Nationals in 2019, John fell from a ladder while helping a friend with yard work. He was paralyzed from the chest down. “I thought he was going to pass away when he was in the hospital, so I didn’t want to go to nationals and compete,” Suni said in an interview with the New York Times in August. “But he told me to go, that he really wanted me to go. So I did. Now I realize that if he didn’t push me like that, I wouldn’t be in the spot I am right now with the Olympics so close.”

"Before I got hurt I always told Sunisa, 'If you make it to the Olympics, I'm gonna run out there and do a backflip.’” John told TODAY. “But I can't do it now."

Since the accident, her father’s mobility has improved. He tells Melvin that his hands are getting stronger, even though his balance remains a challenge. Suni has tweeted about her dads progress on occasion, showing a video of him moving his right foot in a circle and lowering it with the caption “proud.”

The feeling is clearly mutual

But this, obviously, comes even before her win. John told Melvin. “I am proud. The family's proud. The community is very proud of her.”