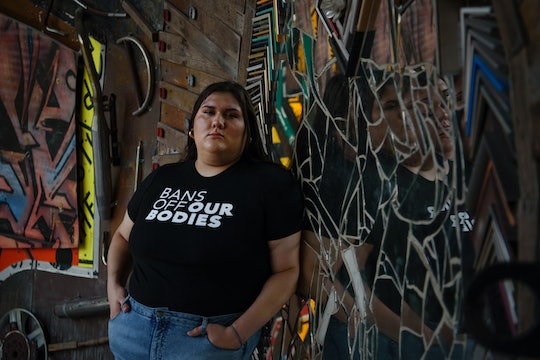 A Teen Was Body-Shamed By Matt Gaetz. She Raised Over $700,000 For Abortion Funds.

“I’m extremely excited that I’ve been able to use my platform to do something that will genuinely make a tangible difference in people’s lives.”

In the fairy tale, Rumpelstiltskin is able to turn straw into gold. In Texas, a group of student activists and strategists called Gen-Z For Change turned a deeply personal insult into healthcare. After being “body-shamed” by Congressman Matt Gaetz on Twitter, 19-year-old Olivia Julianna raised over $711,000 for abortion funds throughout the country, focusing on states hardest-hit by post-Roe restrictions. As of press time, one of her most recent tweets thanks Gaetz for “helping” her efforts, adding “Matt, I’d love to send you a bouquet of flowers. I’ll send one for every hundred thousand dollars we raise.”

This story began on July 24 at the Turning Point USA Student Action Summit in Tampa, a gathering for far-right youth. In a speech, Gaetz, a Republican congressman from Florida, turned his attention to abortion rights activists. “Why is it that the women with the least likelihood of getting pregnant are the ones most worried about having abortions? Nobody wants to impregnate you if you look like a thumb!” he announced to scattered laughter and cheers. “These people are odious from the inside out. They're like 5′ 2″, 350 pounds, and they're like, 'Give me my abortions or I'll get up and march and protest!” (Later, Gaetz doubled down on his comments, telling WEAR ABC3 that he was indeed calling protestors “ugly and overweight” and that they should “be offended,” subsequently turning “Be Offended” into a Twitter meme.)

Julianna took to Twitter as well to voice her disdain for Gaetz’s statements, saying “It has come to my attention that Matt Gaetz — alleged pedophile — has said that it’s always the ‘odious... 5’2” 350 pound” women that ‘nobody wants to impregnate’ who rally for abortion. I’m actually 5’11”. 6’4” in heels. I wear them so the small men like you are reminded of your place.”

Hours later, the congressman, who was not tagged in Julianna’s tweet, retweeted a Newsmax article with the headline “Florida Rep. Matt Gaetz blasted abortion activists in a rant sure to raise dander of his political opponents” in which he shared a screenshot of Julianna’s profile picture with the accompanying text “Dander raised.”

She spent the rest of July 24 posting a series of memes and jokes at Gaetz’s expense before deciding on a more concrete course of action via Gen-Z For Change, a nonprofit organization where she is a strategist.

“In honor of Matt Gaetz publicly body shaming me, I’ll be fundraising for the @genzforchange abortion fund,” she announced.

In the days since the campaign was launched, Julianna has received an outpouring of media coverage and, according to her, personal support from across multiple social media platforms. The Gen-Z for Choice fund has raised over $711,000 and counting. To give an idea of how quickly that number is rising, when we began reporting this story that number had only just crossed the $600,000 threshold.

Julianna reiterated in an interview with Joy-Ann Reid that the money is being split among 50 abortion funds “especially in states where those services will be needed the most because of restrictive abortion laws.”

“I’m extremely excited that I’ve been able to use my platform to do something that will genuinely make a tangible difference in people’s lives,” she said.

Julianna has spent much of her social media energy over the past week highlighting her fundraising efforts. While she has been subject to criticism and additional insults from the right, she bats it away with aplomb. “I’m a 19 year old queer Latina— and that’s why these politicians fear me,” she tweeted. “Matt Gaetz and other republicans are coming at organizers with these childish attacks because they know women across the country are mobilizing.”

Ultimately, Julianna believes Gaetz’s attempted insult was a net good. She even posted an image of a a card thanking him.

“Dear Matt,” it reads, “Although your intentions were hateful, your public shaming of my appearance has done nothing but benefit me. I have gained a substantial amount of support across platforms, and now because of YOUR HATRED, I’ve also helped facilitate ... donations to abortion funds. Your hateful comments towards me will quite literally help pay for abortion services. LOL. Get rekt.”

She signs off “Olivia Julianna, A proud abortion rights activist.”