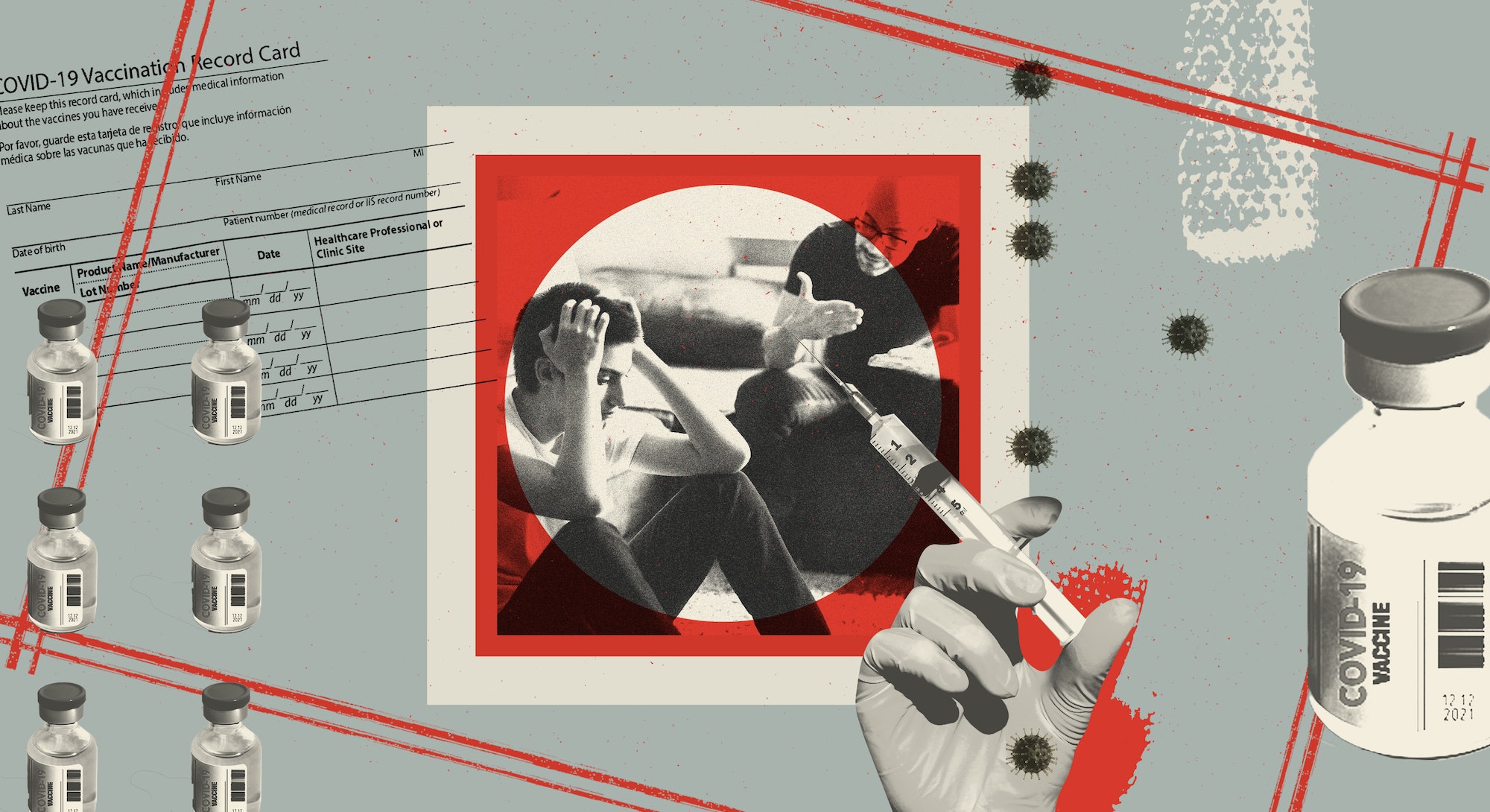 Their Parents Are Anti-Vaxxers. These Teens Are Getting The Covid Shot Anyway.

Or trying, at least.

Adrian, a high school sophomore, knew his parents wouldn’t want him to get the COVID-19 vaccine, so by the time he became eligible, he had already done his research. One day in late April, after months of hearing his parents rail against what they believed were harmful effects of the shots, he emailed his mother a several thousand word document arguing his case. He told her that the vaccine had gone through months of clinical trials and that not getting the vaccine was likely far riskier to his health than getting it.

Still, she refused. After nights scrolling through Reddit, Adrian, who is using a pseudonym to protect his true identity from his family, found he was far from alone: around the country, teens trying to get a COVID-19 vaccine while living under the roof of anti-vaccine parents were commiserating, asking for advice, and sharing tips.

A 17-year-old in Texas worried about his ability to play college sports next year without a vaccine, and asked for advice to obtain one without parental consent. A 16-year-old wondered if they could bring a friend’s parents with them to their appointment instead of their own.

No matter how much evidence you throw at them they won’t listen.

Virginia, where Adrian lives, is one of 41 states where minors need to obtain parental consent before getting vaccinated. All of Adrian’s friends’ parents said yes. He became the only one without protection from the virus. But Adrian was worried for the health of his elderly family members. He wanted to hug his grandma without fear of infecting her. He was already stressed enough that his mother continued to see her.

He decided to take a risk and try to get the vaccine without permission. He started showing up at vaccine providers and trying his luck.

After one nerve-wracking failed attempt at a Walgreens, in which he was turned away for not having a parent present, Adrian found success at a CVS. He immediately took to Reddit to tell others what he found, writing that he is a “16 year old teen who just got vaccinated despite having anti-vax conspiracy theorist parents.”

“I saw a comment by a CVS employee on reddit last week though, who told me that people older than 16 don't need a parent present, nor their signature,” Adrian wrote. “Looking forward to the next shot and the return to normal life!”

Adrian says he had been following the experiences of other teens, and after his own experience successfully getting the shot, also privately messaged a few of them to provide advice.

Nearly 17 million adolescents aged 12-15 around the country are now eligible to get the COVID-19 vaccine. Yet over 20 percent of parents with kids aged 12-17 reported wanting to “wait a while to see how it is working” before getting their child vaccinated, according to a Kaiser Family Foundation poll published in May. Of 1526 respondents, 14 percent said they will get their kid vaccinated only if it is required by schools. Five percent said they would definitely not vaccinate their child. More parents were willing to consider vaccinations than they had been in April, a trend Jennifer Kates, Senior Vice President and Director of Global Health & HIV Policy at the Kaiser Family Foundation, is optimistic that could continue.

“If you know someone who has been vaccinated, you’re more likely to be comfortable with it,” she says. “Kids will be returning to school in the fall, and in some cases there will be pressure in terms of encouraging vaccination.”

Several places have already moved to make the vaccine more accessible for teens. In Arizona, children can receive a court order to get vaccinated if their parents refuse to give the go-ahead. And while California and Pennsylvania require parental consent, the cities of San Francisco and Philadelphia have actively waived these rules, allowing minors between the ages of 12 and 17 to self-consent. Elsewhere, the question of vaccinating minors has become politically divisive. This month, Republican lawmakers in Tennessee pressured the state department of health to stop advertising vaccine access directly to teenagers on social media and hosting vaccine pop up events for teenagers.

A month after Adrian got his first shot, his parents discovered his secret when they received an insurance claim. (While the State of Virginia requires providers to offer the vaccine to individuals for no out-of-pocket charge, if the patient has health insurance, the cost of administering the shot is typically billed to the insurer.) They were furious and grounded him, forbidding him to leave the house.

“This feels surreal. I was prepping to have the best summer ever with my friends, and then... I'm blocked off from them for an unknown amount of time. I really hope I don't spend another entire summer physically isolated from them,” Adrian wrote over e-mail in late June.

Adrian attends a group homeschool with flexible vaccination requirements. Until the pandemic, he doesn’t remember his parents’ beliefs on the matter feeling like an issue. He recalls years ago seeing a billboard on the side of a road encouraging vaccinations. When he asked his mom about it, she told him that vaccinations cause Autism. The topic had not come up much again until this year, when he and his parents started e-mailing articles back and forth about the issue, each describing their own arguments and issuing refutations to the others’ side.

“It made me feel ignored. No matter how much evidence you throw at them they won’t listen,” he said.

People who oppose vaccination often see their opposition as central to their identities, according to research published in May 2021 in the journal Politics, Groups, and Identities, and it is this social identification that makes it more difficult to change their minds, says Matt Motta, Assistant Professor of Political Science at Oklahoma State University and co-author of the study. “If something is central to who you are as a person, you’re not just going to turn around and change it the moment you read a study that says you might be wrong,” he says.

However, Motta is optimistic that kids might be a lever of change in this arena. Although presenting vaccine-resistant people with facts is often fruitless, older kids might be able to successfully frame these issues to their parents in terms of caring for their family or community, he says. “In all likelihood, part of what drew their parents to holding some of these views is concern they have for their children,” Motta said. “Kids are in a very good position to be effective.”

That hasn’t been the case for Madeline, another teen who took to Reddit for advice, and who is going by a pseudonym.

They believe that [drug manufacturers] put mercury and other harmful materials into vaccines.

“I’m a minor (16) residing in California. My parents are anti-vax and I have never been vaccinated. Is there a way for me to get vaccines for cheap or free without parental consent?” she wrote in May.

Madeline hasn’t been able to see her immunocompromised girlfriend during the pandemic, and has been begging her parents to let her get a vaccine. Her parents, though, maintain that they don’t want their daughter injecting herself with “poison.” “They believe that [drug manufacturers] put mercury and other harmful materials into vaccines,” she wrote to Romper. Like Adrian, she showed her parents numerous studies demonstrating the safety of the vaccine, but they still didn’t budge.

After months of isolation, teenagers whose parents won’t let them get vaccinated are facing further social alienation from their vaccinated peers. Only now, Adrian points out, they’re isolated with people with whom they’re locked in an intractable argument.

“It's also hard being around my parents all the time,” he writes, “since I'm not close with them and we have very different beliefs.”