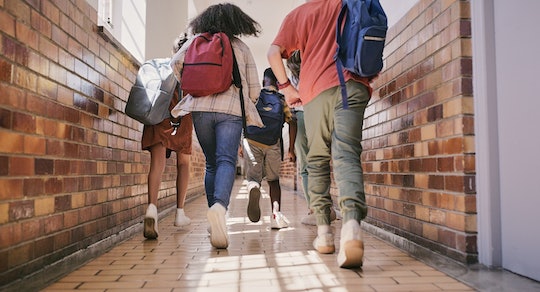 The findings support increased reports of depression and anxiety.

Any parent could anecdotally tell you that their children had a rough time during various lockdowns, illnesses, and interrupted education experience that resulted from the Covid-19 pandemic. But a new study from Stanford University suggests that we can actually see those harms on an anatomical level. MRIs from the brains of teens who lived through the pandemic appear to have aged faster than those of their pre-pandemic peers.

The study, which was published in Biological Psychiatry: Global Open Science and funded by the National Institutes of Health, was led by Dr. Ian Gotlib of Stanford University. The researchers compared MRI scans of 81 Bay Area teens taken between November 2016 and November 2019 (ie: before the pandemic) with those of 82 teens taken between October 2020 and March 2022 (ie: during the pandemic but after lockdown), with participants matched for various factors like age and sex.

The team found that physical changes that occur naturally during adolescence — reduced cortical thickness, larger hippocampal and amygdala volume, and more advanced brain age — were more profound in post-lockdown subjects than in the pre-pandemic group. Researchers concluded that the pandemic appeared to have led to accelerated brain aging in teens.

“Brain age difference was about three years,” Gotlib told The Guardian. “We hadn’t expected that large an increase given that the lockdown was less than a year.”

This phenomenon has been observed prior to the pandemic, the study notes. A 2020 meta-analysis of 54 studies published in Psychological Bulletin found that early-life adversity (ELA) — including violence, neglect, and family dysfunction — is associated not only with poorer mental health, but also accelerated pubertal timing, cellular aging, and maladaptive neuro-developmental outcomes. Cortical thickness, for example, is a general indicator of brain age as it decreases over time. But, per a study published in NeuroImage, it is found to be further reduced in children with a history of ELA.

The study also found higher rates of adverse mental health challenges like anxiety and depression in “peri-Pandemic” subjects, which is perhaps not surprising given the wealth of data that supports such claims. The anatomical differences in pre- and post-pandemic teen brains, however, is less well-observed.

“We found that adolescents assessed during the pandemic have neuroanatomical features that are more typical of individuals who are older or who experienced significant adversity in childhood,” the study asserts. “The pandemic appears to have altered adolescent mental health and neurodevelopment, at least in the short term.”

The study highlights that this may be an area of particular concern for other scientists who’ve conducted longitudinal studies that were interrupted as a result of pandemic shutdowns. In other words, they may have to account for this large-scale traumatic event when considering the results of their studies that continue beyond this period of social isolation, financial anxiety, interrupted mental health and educational services, and the other adversities stemming from the pandemic. And, given the global nature of the pandemic, they will have to do this with no control group.

The authors acknowledge some of the limitations of their research. In addition to a fairly small sample size, the teens involved in the study were “relatively high socioeconomic status” and less racially and ethnically diverse than the population at large. It is also unclear whether these changes will last throughout the lives of the subjects or if, given time, brain age and actual age will find parity once more. According the Stanford News, Gotlib intends to continue following the same cohort as they mature into young adulthood to see if the physical manifestations of the pandemic on their developing brains will be with them for the long-term.

More Like This
Viral Hives In Children: What Doctors Want You To Know
A Parent’s Guide To Stomach Pain In Kids
Amoxicillin Rash: Is It Really An Allergy? Doctors Explain
Does The FDA's Plan To Limit Lead In Baby Food Go Far Enough?
What Parents Are Talking About — Delivered Straight To Your Inbox