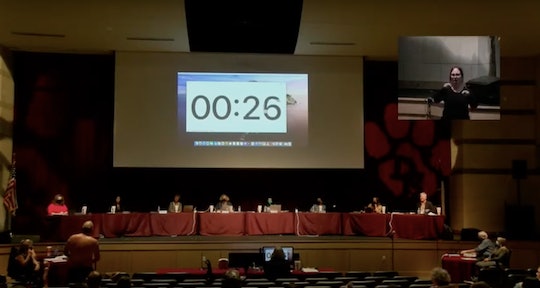 "It's simple protocol, people. We follow certain rules for a very good reason.”

A Texas dad put on something of a show in an effort to drive home a point about mask mandates. James Akers stripped down to just his trunks during a Dripping Springs Independent School District board meeting while arguing that some rules, like school mask mandates and laws requiring you to wear clothing in public places, are just common sense.

“I'm here to say that I do not like government or any other entity — just ask my wife — telling me what to do," Akers told the school board after identifying himself as a 15-year Dripping Springs resident who had put three children through the school district and had a fourth child still in high school. “But sometimes I've got to push the envelope a little bit. And I've just decided that I'm going to not just talk about it, but I'm going to walk the walk.”

As Akers continued to remove more articles of clothing, including his shirt and his pants he mentioned other common-sense rules. “On the way over here, I ran three stop signs and four red lights," video of the meeting revealed he said. "I almost killed somebody out there but by God, it's my world too so I have every right to drive as fast as I want to and make the turns that I want to."

He alluded to parking in a handicapped space despite not having a placard authorizing him to do so simply because he wanted to park "wherever the hell I want to."

After stripping down to just his trunks, Akers delivered his final point: While rules about face masks, traffic lights, and handicapped spaces may inconvenience us, they are designed to save lives. "It's simple protocol, people,” he said. “We follow certain rules. We follow certain rules for a very good reason.”

It was at this point that school board President Barbara Stroud took control of the meeting’s audio to ask Akers to get dressed. "Mr. Akers, I believe you're a swimmer, but if you wouldn't mind putting your pants back on for a comment that would be appreciated," she said.

The Dripping Springs school board has made masks optional for all staff, students, and visitors at its schools per Gov. Gregg Abbott’s executive order barring mask mandates. What’s more, the district has also said it will not require parents to quarantine their child at home in the event the child has been exposed to a positive Covid-19 case.

In an interview with KXAN following Monday’s school board meeting, Akers said he’d hoped to help some opposed to universal masking see the common sense behind the mitigation practice.

“There are too many voices out there that I think are digging in for political reasons, and absolutely just not thinking about the common-sense decisions we make every day to comply with everything from driving down the road and being safe and courteous to other drivers to not parking in handicapped spots,” Akers said. “All these rules that we’re given every day that we follow because they make sense.”