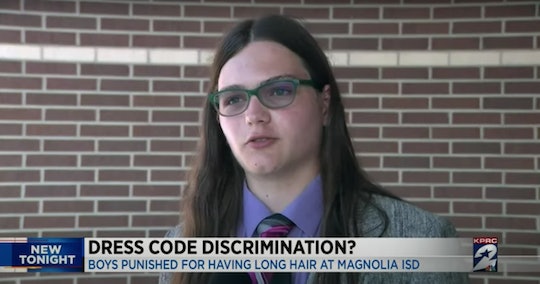 Seven Texas students are suing a Houston school district after they were suspended for having long hair, something the district considers to be a violation of its dress and grooming policies. The American Civil Liberties Union (ACLU) filed a lawsuit against Magnolia Independent School District on Thursday, alleging the policy barring male students from having long hair constitutes gender discrimination, making it a violation of the students’ Constitutional rights and Title IX.

“At a time when students have already been through so much due to the COVID-19 pandemic, it is outrageous that Magnolia ISD administrators are pushing students out of school because of their gender and hair,” ACLU of Texas staff attorney Brian Klosterboer said in a statement. “We have warned the district repeatedly that its gender-based hair policy violates the Constitution, but the district continues to derail students’ lives and deny their right to a public education free from discrimination.”

As part of Magnolia Independent School District’s dress and grooming policies, male students are expected to have hair that is out of their eyes and “no longer than the bottom of a dress shirt collar or bottom of the ear.” Male students are also prohibited from wearing their hair “pinned up in any fashion nor be worn in a ponytail or bun” or from having hairstyles the administration deems to be “a distraction” such as a mohawk, tails, or shaved designs. Female students are not prohibited from having long hair.

The ACLU has alleged the district’s policies on hair are based on gender stereotypes and, as such, violate the Constitution’s Equal Protection Clause and Title IX of the Education Amendments of 1972. “Public school districts cannot treat some students worse because of their gender or require students to conform to gender stereotypes,” the ACLU said in a statement released Thursday. “Everyone has the right, regardless of their reason for doing so, to wear their hair how they would like without being discriminated against on the basis of gender.”

Romper has reached out to Magnolia ISD for comment.

The ACLU filed its lawsuit on behalf of seven students whose ages range from 7 to 17 years old. While six of the students identify as male, one identifies as nonbinary but is still being forced to adhere to the district’s grooming policies for male students. Three of the students have had to un-enroll from Magnolia ISD after being forced into an off-campus disciplinary alternative education program that the school refused to provide transportation to.

Another three students opted to cut their hair after being suspended or threatened with suspension but consider long hair to be an integral part of their identity and do not want to have to cut their hair again. All seven students are asking the district to repeal or amend its long-hair policy so it no longer discriminates based on gender and allow them to return to their original classrooms.

“It feels dehumanizing to have a school, a government entity force me to cut my hair and meet their expectations of appearances,” Daniel Hoosier, a student at Magnolia High School, told KPRC 2 Click2Houston in August.

When announcing the lawsuit on Thursday, the ACLU argued such gender-based discriminatory policies typically target students who do not conform to traditional gender norms or who come from marginalized religious and cultural backgrounds. The ACLU has also alleged Magnolia ISD unevenly enforced their policy on long hair to allow some members of high school football teams to wear their hair long.

Parents of the students have accused the district of inflicting harm on their children. “The district has lost sight of what’s most important and keeps inflicting harm on our kids,” Danielle Miller, one student’s mother said. “No student should be forced to conform to gender stereotypes or have their education upended because of that student’s gender.”

More Like This
Florida Teachers With “Unvetted” Classroom Books Could Face Felony Charges
Teacher Shot By 6-Year-Old Student Told School He Had A Gun, Was Told To "Wait"
Reddit Backs Mom Who Got Scolded By Teacher For Not Inviting 30 Kids To Birthday Party
Jacinda Ardern No Longer Has “Enough In The Tank” & Moms Know Exactly What She Means
What Parents Are Talking About — Delivered Straight To Your Inbox