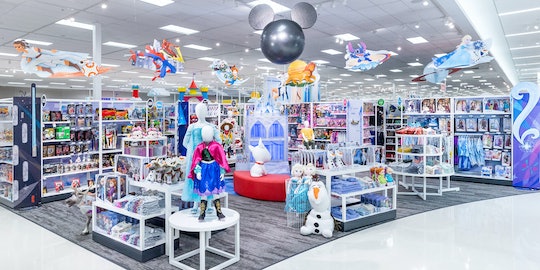 Just in time for the holidays. “Do you want to build a snowman... and go shopping?”

Ever since news first broke that The Disney Store would be coming to Target, we all knew that The Happiest Place on Earth is actually just these two combined stores. The stores first opened nationwide, online, and in the Target app back in 2019, but now, the Disney Store at Target is expanding to include even more locations. Like, over 100 new locations. So good.

At the "store in a store," customers will be able to purchase goods previously only available through The Disney Store — several of which have closed in the last year or so. Plus, The Disney Store at Target will have exclusive merchandise for any new movies and franchises. When the stores first launched, Frozen 2 and Star Wars merchandise was readily available for what were then new releases. This time, fun toys and gifts from Raya and the Last Dragon, new Star Wars franchises, and lots of Marvel goodies will be available.

The only thing that could possibly make this collab any better was if I could get someone to watch my kids for me while I stroll through the aisles, alone, pumpkin cream cold brew in hand, leggings on, sweater cozy. Because you know that your children are going to see that there's now a Disney Store in Target, and you are going to be in that section for roughly eighteen bajillion hours before your kids pick out the "one toy" you promised them. Alone and able to shop without anyone needing to pause for a bathroom break? That right there is the real Magic Kingdom.

But at least they have a seating area for weary parents.

We aren’t sure where the more than 160 new locations will be yet (fingers crossed one of them is at your local Target), but if you want to shop online, Target.com/Disneystore is available. (And there is so much good stuff.)

In a press release about the original launch of the stores, Mark Tritton, executive vice president and chief merchandising officer at Target, said, “We’ve brought the magic of Disney to Target, bringing together great merchandise amidst an experience that’s truly immersive and unique," adding that “guests will be able to connect with the Disney characters and stories they love in a meaningful way while accessing the latest and greatest Disney products, including items previously only available at Disney retail locations.”

Anyone who loves Disney will tell you that frequently the best Disney merch has only been available through them directly. This is really changing the game, and it reflects the changes in retail on the whole. These Disney stores inside of Target are about 750 square feet, and are usually found right near the kids’ toy and clothing sections. Like the original Disney Store, there will be interactive features, music, Disney clips, and more fun to be had. I mean, does it get any better than this?

Personally, I am just looking forward to doing the majority of my holiday shopping at one store. And that alone is a good enough reason to love this collab. The new Disney-in-Target stores will all be available to shop by the end of 2021, but many of them will be ready to go just in time for holiday shopping.

This article was originally published on Oct. 4, 2019