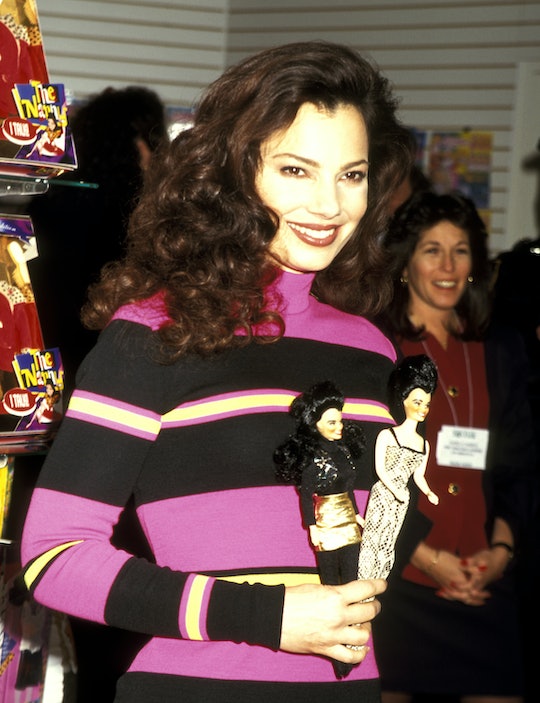 Now all you have to do is master Fran’s voice.

If you’re a child of the ‘90s who watched TV, chances are you caught at least a few episodes of The Nanny, which aired from 1993 until 1999. The show is having a resurgence, thanks in part to the fact that all six seasons were recently added to HBO Max. And if you’re looking for a fashionable and unique idea for a Halloween party, these The Nanny-inspired costumes that channel Fran Drescher (who played Fran Fine) will be, well, frantastic.

As the show’s earworm of a theme song says, “She's the lady in red when everybody else is wearing tan.” And while Fran’s outfits were always over-the-top, they were actually very fashion-forward; her wardrobe included pieces from Moschino, Chanel, Herve Leger, Todd Oldham, and more, often with a ‘60s meets ‘90s vibe.

You don’t need a stylist and a closet full of designer duds to look like Fran though; here we’ve rounded up some of her most memorable looks that you can recreate for a The Nanny Halloween costume. The whole family can get in on the fun too by dressing as members of the high-society Sheffield family (think suits, tartan, and headbands). Or you could go with friends as a different versions of Fran; there’s no shortage of iconic looks served up by the flashy girl from Flushing.

If there’s one thing you can count on, it’s that Fran Fine loves red, leopard print, and a good pattern. This geometric print is actually having a moment again, and a mini skirt with a turtleneck is always a good idea. Drescher’s retro skirt is made by Moschino, according to Shondaland, a designer that she wore frequently in the show, but you can get the look for (way) less thanks to Unique Vintage, or this similar checkered mini skirt from Amazon.

Paired with sweeping bangs and a bouncy half up do, plus black tights and heels, this is an iconic costume that you’ll probably actually wear again.

2. A Costume Inspired By Fran In The Nanny Pilot

This black skirt and blazer with fuzzy leopard details was the second look Fran Fine ever wore, and it appears in the second scene of the pilot episode as she’s interviewing with the Sheffields.

“This is the definitive Nanny-looking costume,” Drescher said in a video for Vogue. “This is what kind of created the style of the flashy girl from Flushing. Definitely sexy but not trashy and it had to have a sweetness to it.”

This blends so many elements of Fran’s style: leopard print with a mini skirt and a blazer appeared again and again in different iterations throughout the show’s six seasons.

I never realized when watching the show as a kid that Fran is stunningly beautiful, and this outfit is no exception. It’s pretty easy to turn this look into a Halloween costume; all you need is a bodycon dress, a heart-shaped bag, plus an ‘90s phone with a long cord, and of course that shampoo-commercial voluminous hair.

That show-stopping bag is Moschino, according to the Instagram account, @WhatFranWore, but there are plenty of dupes out there, (like the quilted heart crossbody from Claire’s) so you don’t have to break the bank on your quest to be the nanny for Halloween.

If you want to bring your child into The Nanny Halloween costume, try dressing as the youngest Sheffield daughter, Gracie, and Fran in matching leopard outfits. This look comes from the episode titled “I Don’t Remember Mama” which is actually a total tear-jerker. The gist is that Fran and Gracie enter a mother and daughter pageant and get kicked out because Fran isn’t her mom. Gracie then cries and explains that she doesn’t remember anything about her own mother.

It’s a sad and sweet episode that will bring up all the feels, plus what’s not to love about matching leopard print cardigans, skirts, dresses, or even a fuzzy jacket to keep you warm on Halloween.

5. The Cast Of The Nanny Halloween Idea

Looking for a costume the whole family can get in on? Well, you can never go wrong with The Nanny cast for Halloween. Fran is once again in a playful and fun Moschino two-piece (it’s a blazer and a mini). As they are in many episodes, the kids (Maggie, Brighton, and Gracie) are in preppy houndstooth, a plaid skirt with a sweater vest, and a suit. A good bet for kids wearing a costume from The Nanny is a school uniform as they’re often seen in their plaid skirts and blazers (which is always a funny juxtaposition next to Fran’s outfits).

You probably won’t be able to score vintage Moschino for Halloween, but white and red vinyl polka dots will transform a plain black dress or skirt suit.