Transitioning Into The World Of Fathers 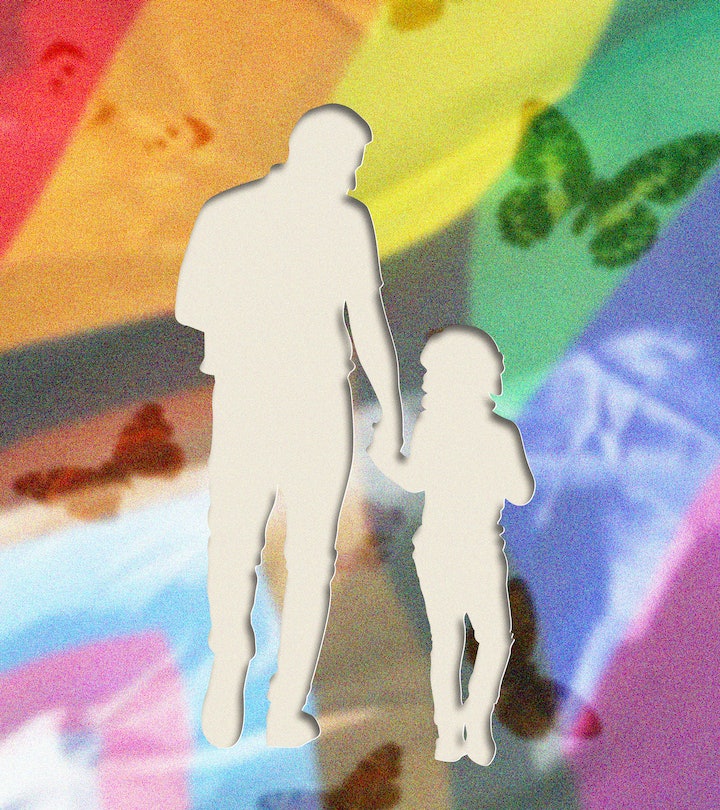 The Hotel Breakfast Where I First Passed As A Dad

I always thought my father wished I was a boy, but by the time I was it was too late.

Everyone says Samson looks like my father. Big, round heads; small, flat noses. Pig nose, my mother used to say. We were living at my parents’ house for the summer, all of us, me and my partner and our three kids, and my father snuck Samson upstairs every morning while getting dressed for work. Sat him in front of cartoons while putting on that dorky white underwear, a V-neck Hanes tee, slacks and a polo. A watch — nice, but not too nice. Practical. My father plopped down next to Samson, put on some socks and shoes. He thought I didn’t know. But I saw him grab a handful of M&M’s and Samson’s tiny hand while I spread jam on three slices of toast. Who is my father behind a closed door? I don’t think I’ve ever seen him get dressed. Where were you? Your toast got cold, I told Samson when he came back. His thin, straight body. A human Tootsie Pop. Sweet, easy to love. My big guy, my father always calls him.

The first person who referred to fatherhood like I might know what he was talking about looked nothing like my father. He had a warm face, wire-rimmed glasses, like a patient math teacher. I could see his delicate hands gingerly drawing a parabola on a whiteboard. He had a cheap-looking gold watch, one I imagined matched with a short-sleeved oxford, a thermos of soup for lunch, a spiral-bound grade book on a tidy teacher’s desk.

At the hotel breakfast I could not possibly have enough arms for all the things my three boys needed; I turned waffles, poured juice, shook cereal out of cheap plastic dispensers. The kids spent the morning lounging on the hotel couch, watching cartoons. This is their luxury: sugar cereals, a bedroom with a television. Their first hotel stay. The man walked toward us in the middle of my first sip of sad, watery coffee. I steeled myself. I knew what I looked like. And yet. When my boys were around that age, I took them fishing. I’m so glad I have a picture of that day, he said. We were both fathers, he thought. Two of the same thing. Well, so long! he said soon after, shuffling away, surprised by his own boldness, approaching a strange man at the hotel breakfast, a man who reminded him of fathering young boys.

We were both fathers, he thought. Two of the same thing. Well, so long! he said soon after, shuffling away, surprised by his own boldness, approaching a strange man at the hotel breakfast, a man who reminded him of fathering young boys.

Samson was lost at his preschool’s family dance party. One minute I saw his blond head spinning in the middle of the dance floor; the next, he was nowhere. As I milled around, I heard his voice. I’m looking for my dad! In the corner of the room there he was, tugging on a teacher’s shirtsleeve. Who? she asked him.

My dad, I’m looking for my dad, he said. She looked around the room; eventually we locked eyes. Would she have seen me if Samson didn’t have my face? Did I look anything like a dad?

Not many kids were made by their dads, right? Samson asks every once in a while. I nod. That makes me special, right?

When I was five a man approached me after basketball practice at the local gym to ask if I was related to Mary McIlraith. She’s my aunt, I said. I told my father as we left St. Francis de Sales and began the four-block walk home. He said I play like her, I told him. That’s quite a compliment, he said, tousling my hair, jostling a few hairs free from my ponytail. There were three of us kids then, but my brothers were at home. For a moment I felt like his son. So fast, so strong, someone had noticed. Thick calves, my first pair of ball shoes. My new basketball tucked under my arm, round and fresh and leathery. I could be a good son.

My mother says the rift between me and my father started my freshman year of high school. He would drive me to school on his way to work, dropping me in the circular drive in front of Immaculate Heart Academy. I’d sling my backpack on, pull up my knee socks, and tense my whole body, ready to head in. An all-girls school. After a few months there I told him I wanted to transfer. Catholic school was not working out; could I just go to the public school? He said no. We don’t quit things just because we don’t like them, he said. We. He’d said the same thing before, about clubs, sports teams. You don’t understand, I said. It wasn’t like that. I’d take the same classes. Geometry, Honors English, Honors French. The same, just in a different building. After his final no, we rarely talked in the car. We listened to Imus in the Morning, New York traffic reports. My mother says he’s still hurt over it, 15 years later. All those quiet mornings in the car, she says. What was he supposed to think?

When I was a few months old, Dad’s brother, John, tried to convince him to throw me in the pool, like John did with his own daughter. John was convinced this was the only way to teach a baby to swim. But my father couldn’t do it. When it was time for me to learn to ride a bike, he waited until John was in town, visiting their mother who lived upstairs in our Rockaway Beach two-family. My father found himself unable to release me and my sparkly pink Huffy down Beach 125th Street. Uncle John’s big hand held the back of my white bicycle seat, steered me half-way down the block, let go, released me into the summer sun. The street was sandy; everything was sandy, but I held on. I don’t know whether my father watched.

At the hotel breakfast, I’d been on testosterone for about three months. We were on our way west from Philadelphia, moving to Upper Michigan. Once we left Philadelphia, I was never mistaken for a mother again.

My partner would tell Samson, When Krys was born, the doctors guessed who he was based on how he looked, but they were wrong.

The one thing my father and I always had was Law & Order. I have a thing for procedurals. I get into a rhythm with them; they allow my mind to be still. The body, the case, the trial. The body the case the trial. The fiction of it all; the false New York that is the show’s setting. Not the Rockaway Beach where I first longed to be his son. The courtroom felt like an extension of our living room. Jack McCoy’s speeches. My father and I could never talk politics, religion. Only sports. There wasn’t that much to say. Jack McCoy talked for us. We didn’t need How was school? How was work? What is it you do again? What is it you study again? There was McCoy: Your grief might seem a little more real had you not just admitted you cut off your wife’s head.

The nurse practitioner who prescribed my testosterone and I were friendly right away. I know how to do happy chill trans guy, and she and I both laughed at my jokes. We chatted CrossFit, my job, my third baby, who was only six months old. Samson was three, old enough to understand, his mother and I thought. My partner would tell him, When Krys was born, the doctors guessed who he was based on how he looked, but they were wrong. The NP looked at a checklist, back at me. You’re not, like, a super-angry person, are you? she asked, pen ready, scanning my face. Looking. At me: Small, upbeat, dressed in nice slacks and a striped shirt. A pair of Chuck Taylors. A pasted-on smile. After How’s heart health in your family? and Are you thinking of having any more children yourself? this was what she wanted to know, about my anger. I thought about the person I am, about all I’ve done, and I said, Well, my wife says I get a little ragey merging onto the 76. She laughed again. We all do, she said. Your blood work looks great. My prescription was ready for pickup.

I always thought my father wished I was a boy, but by the time I was it was too late.

An excerpt from The Natural Mother Of The Child: A Memoir of Nonbinary Parenthood

The Natural Mother of the Child
Bookshop