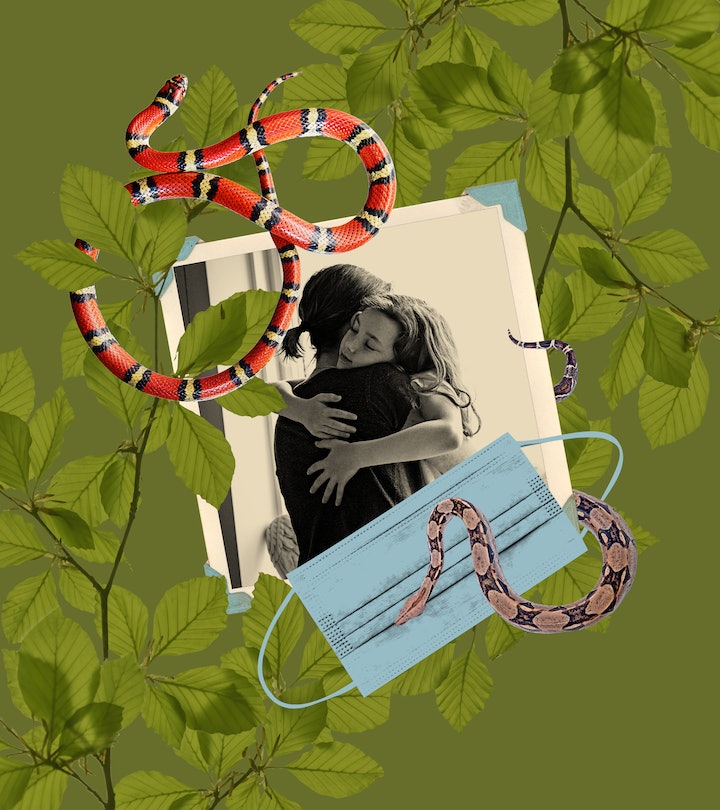 Risk was part of my family’s life after our daughter was diagnosed with two rare heart conditions. Then came the pandemic.

One evening, early April, on a particularly vexing day in the 13th month of living la vida lockdown, deep in the woods of upstate New York, I came home with my daughters, aged 3 and 6, to find my husband, Eric, with a strange look on his face. Was he bereft? Astonished? It wasn’t clear, and when I asked him, What now?, he said that he had just seen two snakes slither into our home through the open kitchen door.

Our house, which he designed and built before we met, is small and open-plan on one floor, made primarily from up-cycled materials. Our ceilings are sloped in funny ways and made from discarded wood planks from a bar on St. Marks Place. Our bedroom doors are sheets of plywood that don’t open and shut but roll back and forth. If you like a handmade house full of quirky design detail, you’d love our house. And if you were a snake who wanted to wander freely to find warm bodies or crumbs of food, you would likely love it, too.

Turns out there’s not much to be done to get snakes out of a house. Eric Googled, trying to suss out how common venomous snakes were where we lived (not very), and to match the snakes he saw — 2 feet long, light brown, thick as garden hoses — to images on the internet. I set out some glue mouse traps, shuddering, imagining, and Eric sprayed a thick line of furniture cleaner where the kitchen area becomes the living room, guessing, hoping, that our new roommates would avoid the scent of that line and at least confine themselves to one area.

The first year of her life was terrifying, a cascade of specialists delivering overwhelming information, each conversation like a baseball bat to my head.

We then proceeded with the evening routine. What else could we do? We were both exhausted. Christine, the girls’ nanny, hadn’t shown up for the second time that week. She also didn’t respond to any of our calls or texts until around noon, when she shared in a rambling message that she wasn’t feeling well and might have Covid.

We were terrified of Covid, perhaps more than most parents, since we’d seen our younger daughter go into cardiogenic shock from a common virus when she was 9 months old. She was born with two rare heart conditions — two snakes in the house — one pertaining to the beat, which could cause sudden unexpected death, and one to the weakness of her heart’s squeeze.

She had open-heart surgery to install a pacemaker on the day she was born, and the first year of her life was terrifying, a cascade of specialists delivering overwhelming information, each conversation like a baseball bat to my head. I proceeded in a kind of fog, adapting without fully understanding, sometimes marveling at her resilience and adorableness, but more often depleted and irritable. Some internal part of me was always bracing for emergency and eventually, my heart — not the literal one, but the one we talk about in love songs — was wrecked.

As I emerged into her second year, other things came back into focus. I had an older child to raise and a marriage to not ruin. What turned out to be best for us all was for me to put much more of my focus on my self: my creativity, my career, my body. It didn’t cure my daughter, but it made my life manageable again, and, after a while, my work and my relationships blossomed in unexpected ways, which upped the harmony factor in our home.

We had a long stretch with no emergencies, and then came Covid. Like billions of other people, we were plunged into the trauma of it all. But I saw, maybe for the first time, that in our daughter’s ordeal, our family had picked up some niche skills for rough going. We were, in a weird way, prepared.

Then, four months into the pandemic, my daughter had a series of cardiac crises and had an ICD installed in her tiny body to defibrillate her automatically, should another crisis occur. This was all at least as harrowing as it sounds, but the surgery went well, and afterward, she was safer than she had ever been before. About twice as safe? The doctors couldn’t say. These things can’t be measured. She’d always be at risk. And my brain can’t quite do the math of halving that kind of danger.

Parenting a medically fragile child can make you fearful, but if I’m being honest, terror was not what I felt when I read Christine’s rambling texts. I thought she was probably lying. This person we had hired to watch our children had lied several times in recent weeks and was generally allergic to guidance and boundaries. We kept giving her more chances because it is difficult to find safe child care during a pandemic in upstate New York. She’d been our fifth nanny in six months.

Acute danger is rather straightforward compared to downgraded danger.

But there I was, roiling with the dread of a new nanny search and responsible for my daughters for the indeterminate future. What’s a mother to do? I posted a job ad on a website for caretakers and took the kids to Target. As I drove, I silently rehearsed firing Christine, each time with more unassailable language, while my car breezed by the Target exit. Stress is disorienting; it’s brain-damaging. I bought my kids more stuffed animals they did not need, and then, in the parking lot, I fired Christine, by text. For a few wonderful seconds, I felt victorious, like I had avenged mayhem itself.

But I had not. And soon I was awash in regret and shame that I’d allowed someone so troubling to be in charge of my children, that I had so fouled up the fundamental job of providing consistent care.

There wasn’t much time for feelings. Before we left the parking lot, I was setting up two appointments to meet with prospective nannies the next morning. They were both named Linda and I knew this would trip up my already tripped-up daughters. My 3-year-old referred to Christine as Nancy, who was Nanny No. 2. She actually called all the nannies Nancy, a sane response to the total chaos of my replacing her caregiver every few weeks.

That spring things started to ease. I hired one of the Lindas, who was lovely, reliable, responsible, reasonable, and punctual. She, my husband, and I got our first vaccination shots, and then our second. That meant our family was about half as at risk for Covid, if you could meaningfully measure such a thing, which I cannot. Acute danger is rather straightforward compared to downgraded danger.

And then one night, I went into the kitchen and saw a snake slithering behind our toaster oven. I handed Eric a broom and, with a few swift sweeps, he moved the toaster, swept the snake to the ground and maneuvered it out of our house. Less gracefully, he lunged to shut the door. “He wanted back in,” he said.

And just like that, we had cut our snake problem in half. Or had we? Can you measure such a thing?

We still haven’t found the other snake. I only occasionally think about it and when I do, my inner voice says, Well, it may have left on its own, and, even if it didn’t, it’s probably not venomous. I only occasionally reckon with my daughter’s fragility, too, because it completely wipes me out. Having eliminated the risks I can eliminate, I live with the second snake.