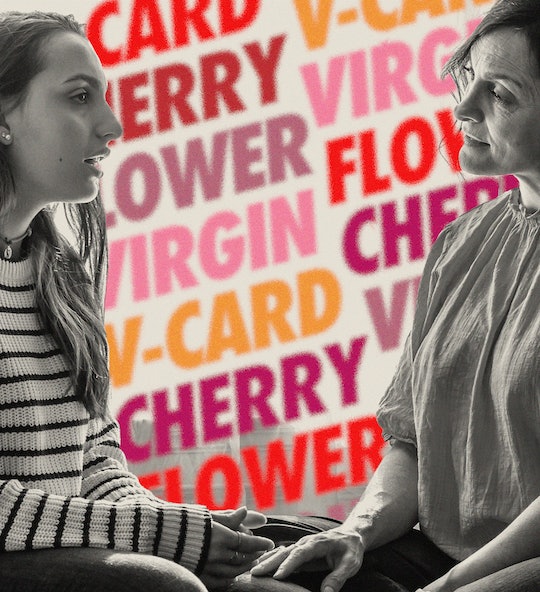 The night I “lost my virginity” wasn’t the first time I had sex, but it was the first time it was consensual. I had talked my boyfriend — who I loved — into having sex with me the night of the Homecoming dance, where I had just been crowned Homecoming queen, which felt at the time like the height of my social power.

It could not have been more cinematic and even then, I knew that no man or woman could have written a more perfect story about a teenage girl losing her virginity to her boyfriend. Cue teen movie makeout montage (ft. Sixpence None the Richer).

This Lost Virginity Tale™ was the story I wanted to tell: Just a couple of non-virgins rejoining the dance party at the Courtyard Marriott.

I didn’t realize this at the time, but I had created my own social construct when it came to my virginity: No longer was it something that was taken from me. Instead, it was something that I had and then didn’t. On my own terms. I hadn’t lost my virginity so much as I had gained a meaningful sexual experience, a differential that I believe helped me overcome formative trauma by way of narrative take-back.

I refused to lose what I had previously refused to give. And while it took me decades to recognize the power I had gained through rejecting the terminology of my first experience, I am now able to navigate the virginity conversation with the perspective of someone whose “first time” was self-defined.

A person’s “first time” can be self-defined regardless of body parts or preference.

Of course having to self-define sexual experiences, including virginity, has always been the case for queer people, specifically for queer people with vaginas who do not have penetrative sex. But I hadn’t thought about my experience as it related to all of this until a recent conversation I had with one of my kids. My daughter had texted me about someone losing their “V card,” a reference that opened the floodgates.

I wrote back to her:

The idea of losing one's virginity insinuates hetero normative P-to-V sexual intercourse when there are lots of different ways to have sex based on sexual orientation, and losing one’s virginity has systemically been a patriarchal tool used to dominate and subordinate women and girls by way of purity culture.

My child and I were drawn from there into a deep conversation about the ways the term “virginity” has been harmful for pretty much everyone who isn’t a cis-hetero man. The list of ways it’s bad, it turns out, is long.

The Concept of Virginity Too Often Erases Queer Experiences

The erasure of personal experiences and the nuances of sexuality and gender have, in my opinion, rendered a forever problematic term completely useless. The truth is, penetrative sex is not what sex looks like for a large part of the population, including teenagers, many of whom are experiencing “first times” without definitive terminology. And yet virginity as a construct is so embedded in the cultural vernacular that even Gen Z, for all its inclusivity and enlightenment, still throws around the term.

But if a virgin is someone who has never had sex and not all sex = the same sex, then there is actually no way to qualify a virgin at all.

Rephrasing sexual firsts as healthy milestones can make all the difference when it comes to raising healthy, shame-free, and sexually empowered young people.

The term “virgin” assumes the penis is some make-or-break organ, but penises do not wield as much power as their PR team would like you to believe. There are many people with vaginas who will live healthy sexual lives without ever having been penetrated by one, and even for heterosexual women, penetrative sex is often the least pleasurable sex act.

In an informal poll I did on Instagram (you can find it here), out of 5,000-plus women who responded, only 4% said they came from their “first time.” On the flip side, 75% of cis-men said they had an orgasm the first time they had penetrative sex, which only underscores how wildly imbalanced our “first” experiences are.

If this is so often the case and we put such massive value on the act of P-to-V intercourse, are we not sending a message to women that their pleasure doesn’t matter the way cis men’s pleasure does?

“Virgin” Is A Derogatory Term — And A Double Standard

Consider that there is no penis-equivalent to terms like “popped her cherry” in the same way there is no boy-equivalent words like “slut” and “whore.” Beyond that, the term virgin is often used derogatorily: Just as some girls are made to feel shame if they have “lost” their virginity (i.e., are sexually active), others are made to feel shame for holding on to it too long (not active enough). The words are also unfairly directed at boys, who in many cases feel pressured to have sex because, within the social construct of virginity, cis-het boys can only move up socially when established as those with sexual experience.

Such is the sprouting seed of rape culture.

What’s more, the term “virgin” is still inextricably linked to a draconian obsession with the “hymen.” As many of us know, a broken hymen is by no means a sure sign of a first encounter with a penis. There are many different ways to break one’s hymen and all hymens are different. Even though the link between hymens and virginity has been debunked time and time again, to this day there are doctors who refuse to perform transvaginal ultrasounds on “virgins” because of the “broken hymen” concern.

The Toxicity Of Purity Culture Is Damaging For All Genders

The concept of virginity underpins some of the worst traits of purity culture. Christianity was literally born from the concept that only a “virgin womb” could carry the son of God, a concept that has been used time and again to instill shame and guilt in girls and women who are sexually active. “With the Virgin Mary, virginity became hand in hand with purity and chastity,” writes Lindsay Betros in her 2019 essay “5 Reasons Why Virginity Is A Social Construct.” “Virginity was then redefined in a patriarchal society as men were looking for the ‘purest’ of wombs to bear their children: virgins.”

But this doesn’t just affect young girls; boys are also told that sex before marriage is wrong. All young people raised within purity culture of choice and shamed for wanting, let alone acting on, any alternative.

If “virginity” is something to be saved for someone, this framing automatically robs a person of bodily autonomy. Every child should know that their body belongs to them regardless of relationship or marital status. Suggesting anyone give their body to another person as some kind of pleasure gift is all-too-often harmful and toxic and almost always benefits the cis-hetero male in the equation.

When I posted on Instagram about my text exchange with my child, one commenter replied with the following:

“I’d really like to stop the term ‘losing your virginity’ and replace it with something like ‘gaining intimate relationships.’ The whole concept of ‘losing’ part of yourself and being less whole afterwards bothers me… virginity (isn’t) something that can be lost or taken.”

On top of this most excellently stated truth, taking the power away from penetration and giving it to all acts that hold physical and emotional value and are inclusive of all pleasurable sexual experiences means the re-centering of pleasure, as well. Being inclusive of all the different “first times” is an amazing way to re-center the experiences of all different genders and orientations.

Rephrasing sexual firsts as healthy milestones can make all the difference when it comes to raising healthy, shame-free, and sexually empowered young people across genders, orientations, and experiences. A person’s “first time” can be self-defined regardless of body parts or preference.

Beyond that, ditching dated constructs like “virginity” considers those of us who have experienced sexual trauma and respects our bodily authority so that we may reframe our first times from a place of self-love, consent, and reclamation of bodily autonomy.

All first times, when done consensually and from a place of joy and comfort, should feel special. And they should be up to every individual person to define in their terms without the pressure of toxic and outdated terminology.