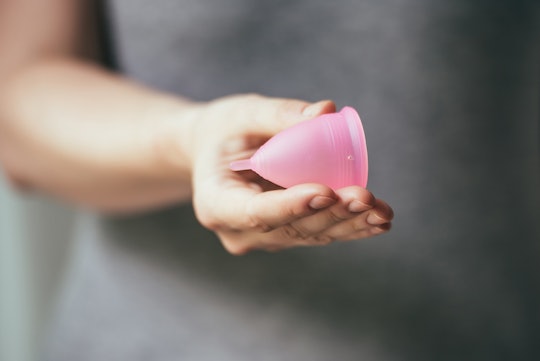 This Menstrual Cup Hack To Get Pregnant Faster Might Actually Work

Anyone trying to conceive knows how demoralizing it can be when you get your period instead of a positive sign on a pregnancy test. And that feeling only grows with each passing month that Aunt Flo makes an appearance. But there's a new fertility trend that just might help you get pregnant faster and it involves using an unlikely item — a menstrual cup. Some savvy TTC-ers out there discovered that menstrual cups may help you conceive faster, and there's science to support this unexpected fertility hack.

Menstrual cups have become more popular in recent years as an eco-friendly, budget-minded, toxic-free alternative to tampons and pads, according to The Seattle Times. Some cups can be worn for up to 12 hours, so there's less time spent on changes. But now these menstrual cups, specifically SoftCup, are being used by women after sex to keep the sperm close to the uterus for as long as possible, according to Parents.

"A menstrual cup full of sperm allows the sperm to only move in only one direction and that is towards the egg," explained Sherry Ross, M.D., an ob-gyn and women's health expert, in an interview with Parents. "The longer the sperm hangs out at the cervix and the entrance to the uterus, the better chance it has at swimming up into the fallopian tube to fertilize the egg."

So how exactly do you start using the menstrual cup as a fertility tool? If you've never used a menstrual cup before, you'll definitely want to practice inserting it a few times before you proceed to intercourse, because they're not actually that easy to maneuver until you've gotten the hang of it. Once you feel comfortable with inserting the cup, then you'll want to have one at the ready for post-sex use.

"Once the deposit is made, the cup should be immediately inserted, and one should lie face up with a pillow under the small of the back for support. This will ensure that the deposit travels to the back, near the opening towards the uterus," explained We Have Kids.

Depending on the specific cup you're using, you can then keep the cup in for hours (following the specific wear guidelines of course!). "I would suggest leaving the cup in place as long as you safely can," advised Ross to Parents.

A quick look on fertility forums reveals that this menstrual cup trick just might be as effective as it sounds, if you believe in anecdotal evidence — and who doesn't? "I used Insteads [maker of SoftCups] and got pregnant that same month for both of my kids," explained Blosmbee on Live Journal.

There's also another way to use the cup that's especially useful for same-sex couples trying to conceive. "As a lesbian, we too were looking into a Diva cup as a conception aid...our friend conceived with this method the first time....but they put the donor semen in the cup...inserted it and then had fun bding [baby dancing]," advised Smilinaly, on BabyCenter.

For women considering fertility treatments, trying the menstrual cup technique first might just save you thousands of dollars in expenses. "Out of desperation the month before I was ready to begin IVF, I used SoftCups right after we had sex, then put my feet up and left it in for at least a few hours. At my next IVF appointment, they did a baseline ultrasound and bam! I was pregnant," explained in Meggan Hunt in the aforementioned Parents article.

Whether or not the cup was actually responsible for these pregnancies has yet to be proven. There could be a placebo effect going on. However, it certainly seems worth a try if you're yearning for a bun in the oven.

More Like This
Yes, It’s Possible To Get Pregnant If You Have An IUD
40 Fantastical Boy Names That Start With “F”
7 Surprising Old Wives' Tales About Christmas Eve Babies
14 Free, Printable Birth Plan Templates For Every Kind Of Delivery