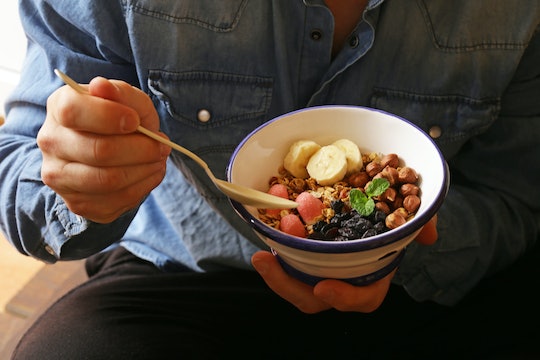 Men's Fertility May Get A Boost From This Snack Favorite

It goes without saying that food has an impact on every aspect of your life. From your mood to your mortality, what you eat can change the make-up of your body, sometimes in significant ways. One area where food can play a big role: Your ability to conceive. In fact, this snack favorite can boost men's fertility, according to new research. And let's just say it's pretty apropos.

A new study presented this week by the European Society of Human Reproduction and Embryology found that eating nutrient-rich nuts can improve male fertility, according to Business Insider. Specifically, researchers from Rovira i Virgili University in Spain recruited 119 men, ages 18 to 35, for the 14-week study, and broke the up into two groups: One that ate nuts, and one that didn't. And what they discovered is that the men who consumed two handfuls of almonds, hazelnuts, and walnuts with their typical daily diet made more, better shaped sperm cells that moved further and faster, Business Insider reported.

The Spanish researchers during their presentation that their findings "support a beneficial role for chronic nut consumption in sperm quality," according to CBS Local. But they would not go as far as to say that a nut-rich diet would improve chances of conception.

We can't yet say that based solely on the results of this study. But evidence is accumulating in the literature that healthy lifestyle changes such as following a healthy dietary pattern might help conception — and of course, nuts are a key component of a Mediterranean healthy diet.

Interestingly enough, the Rovira i Virgili University study comes a year after researchers with the Icahn School of Medicine at Mount Sinai found that sperm counts have dropped significantly throughout the Western world, according to NPR. In particular, the study, published last year in the journal Human Reproductive Update, discovered that, over nearly four decades, sperm counts plummeted by more than half. The researchers came to this conclusion after analyzing data from nearly 43,000 men from a few dozen industrialized countries, making it the largest and most comprehensive research on the subject to date, NPR reported.

Of course, not all men can toss walnuts in with their lunchtime salad in order to increase their sperm count. After all, up to 15 million people in the United States have food allergies, which include peanuts and tree nuts, according to Food Allergy Research & Education. Boosting your fertility is not worth going into anaphylactic shock.

But research has found that there are other foods that can boost sperm count, vitality, and motility. Bananas, dark chocolate, oysters, broccoli, ginseng, salmon, vitamin D-enriched dairy products, asparagus, and garlic are just a few of the grocery items that can improve male fertility, according to Medical News Today. Studies have also shown that some of these food could increase libido and testosterone levels, according to Mother & Baby.

Men interested in improve their sperm production should also look for foods that are rich in antioxidants, such as selenium, vitamin E, and I-carnitine, Medical News Today reported. In addition, they should increase their intake of healthy fats, such as omega-3 and omega-6.

It's important to remember, though, that changing to a nut-rich diet will not be a cure-all for poor sperm production. There are a number of mitigating factors that can affect your fertility, such as lifestyle habits and genetics. But adding foods packed with nutrients, such as nuts, to your diet can only help improve your health, whether it's protecting you against heart disease or making more, better sperm.