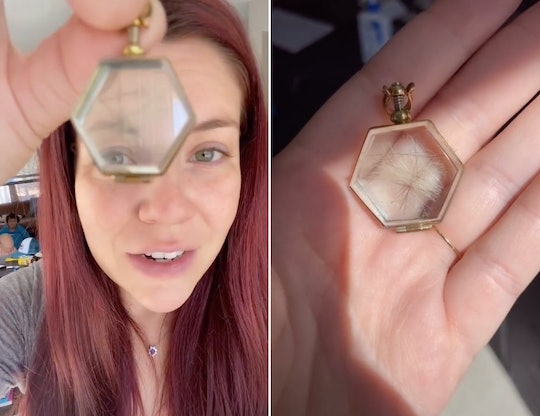 There is nothing more beautiful than a mother’s love for her child... and, also, it seems, nothing creepier. Moms on TikTok are sharing things they do that make them sound a little like serial killers and while that might sound silly at first, the responses make it clear that there’s, well, something to it...

TikTok user Hannah Williams started the hilarious conversation last week. “Tell me you’re a parent by telling me something that you do that also sounds like it would actually be a serial killer doing it.” She added brightly, “I’ll start!”

Williams, who has over 211,000 followers on TikTok, then showed a pretty, unassuming pendant around her neck. “This pendant... contains the hair of three children,” she explained. “I literally snuck into their rooms at night while they slept and I cut their hair off their head and now I wear it around my neck.”

She then added that she has a bonus mom/serial killer item. “I have a very expensive, collector’s item, small box full of teeth,” she said, explaining that she doesn’t keep it in her house but a storage unit where she can “visit my little teeth whenever I want.”

See the full, hilarious (but also maybe unsettling?) video below...

Other moms enthusiastically shared their own stories of not-really-but-kind-of-really horror. “I kept both my kids’ umbilical cords!” TikTok user @queenkodie said. (This, or some version of it — like keeping umbilical stumps — was a pretty common response...)

“Sometimes I’ll sit [at] the end of my daughter’s bed and listen to her breathing. Sometimes I’ll be there for hours,” @susbish97 chimed in.

TikTok user @julesmura, on the other hand, also likes mementos... “I still hold my daughter’s fingernails in my hand for a while after I clip them because they’re so tiny it makes me cry.”

And @crazymtyer said she saves her kids teeth, kept their umbilical cords, and “watch them while they’re sleeping.” @fredfrederick13 shared in a video that she does the same, but takes it up a notch: “Sometimes late at night when they’re sleeping, I creep upstairs and I just watch them and take pictures.”

Others shared the Dexter-like things their own parents have done. Collecting teeth and hair were common, though some, apparently, don’t stop at mere collecting. “My dad collected all three of me and my siblings’ teeth, and 11 dogs worth of teeth,” said @sjennifergreen. “He plans to make a prayer bracelet out of it.” Well that’s... nice. Very nice and extremely normal...

Others don’t stop at infant ephemera. User @dino_monster shared that their mother took it to another level. “When I got into my car accident a piece of my ankle bone broke off in my car and my mom kept it.” (That one’s probably a winner... and by “winner” I mean “run – run fast.”)

And yet the most common response is, perhaps, the most telling: “Where did you get the pendant — I want it.”

More Like This
"Crybaby Ambulance" In Europe Will Help Exhausted Parents
Reddit Applauds Mom Of Five Who Stood Her Ground & Left Sleeping Dad Behind
Little Miss Memes That Speak To Our Mom Souls...
Dad Removed From Flight After “Nervous” Toddler Wouldn't Sit In Own Seat For Takeoff