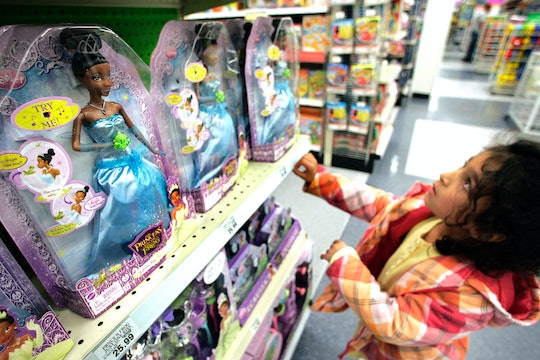 And an area to meet Geoffrey the Giraffe!

After filing for bankruptcy in 2017 and closing all of its U.S. locations in 2018, Toys ‘R’ Us has announced plans to open a flagship store in a New Jersey shopping mall. With roughly 20,000 square feet of toys, an area to meet Geoffrey the Giraffe, an ice cream parlor, and a massive two-story slide, the store stands to make every toy-loving kid’s dreams come true.

WHP Global, the parent company behind Toys ‘R’ Us, announced Wednesday that its flagship store would open inside New Jersey’s American Dream mall in mid-December — just in time for parents and grandparents to complete their holiday shopping. But while the store is expected to be a one-stop-shop for popular children’s toys and games, it will reportedly also offer a number of interactive experiences geared at helping shoppers of all ages rediscover their love of play. While adults shop, children can meet famed Toys ‘R’ Us mascot Geoffrey the Giraffe or take a ride down the store’s slide. The store will also enable shoppers to grab something to eat at Geoffrey’s Cafe and ice cream parlor.

“The Toys ‘R’ Us brand is big and growing fast,” WHP Global and Toys ‘R’ Us CEO and Chairman Yehuda Shmidman said in a statement. “Today we have over 900 stores and e-commerce sites operating across 25 countries outside the United States, and now our United States expansion plans are in high gear, propelling us into the next chapter of growth for our brand.”

The new Toys ‘R’ Us flagship store at American Dream will be the retailer’s second attempt at operating a traditional brick-and-mortar store in the United States since declaring bankruptcy and shuttering stores roughly four years ago. According to KSAT, Toys ‘R’ Us opened stores in Texas and New Jersey in 2019 before ultimately closing them earlier this year. This time, however, WHP Global is hoping American Dream, which features an aquarium, water park, ice skating rink, mini-golf, and the Nickelodeon Universe theme park, will help draw families in and support continued sales.

“American Dream is a one-of-a-kind unrivaled retail center featuring massive entertainment experiences that make it an ideal destination for families,” Shmidman said. “Debuting our first Toys ‘R’ Us flagship here is a no-brainer.”

But New Jersey isn’t the only state slated to see Toys ‘R’ Us shops return. The toy retailer is also expected to open some 400 Toys ‘R’ Us shop-in-shops within Macy’s stores beginning next year.