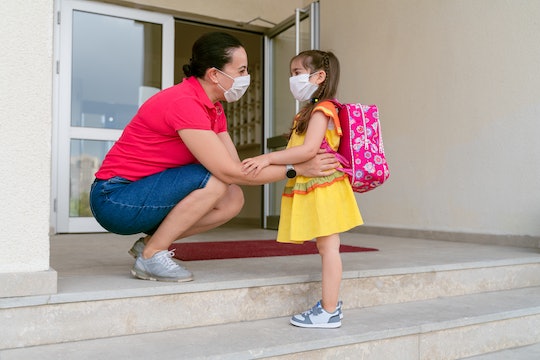 The average mom of two would see her lifetime earnings increase by $97,000, research from the National Women’s Law Center showed.

New research from Columbia University and the National Women’s Law Center has found that providing all parents with access to affordable, high-quality child care could have serious benefits to families’ incomes, the gender wage gap, and women’s retirement security. In fact, universal child care would boost women’s collective lifetime earnings by $130 billion and provide the average mother of two with an additional $97,000 over her lifetime, overall. The research found access to universal childcare would be a major boon for women, especially considering how the ongoing coronavirus pandemic has disproportionately impacted them.

More Like This
Mandy Moore’s Son & Hilary Duff’s Daughter Had The Cutest Play Date Ever
The Obamas’ New Family Rule? Get Vaccinated If You Want To Hang Out With Us
A 25-Year-Old Mom Thought She Was Pregnant With 7 Babies. She Gave Birth To 9.
10 Hilarious Tweets That Perfectly Capture What Moms Are Going Through

When schools across the country first closed early in the coronavirus pandemic, many working mothers were forced to step away from their jobs in order to care for their children. From February 2020 to February 2021, more than 2.3 million women left the U.S. workforce, bringing women’s labor force participation rate to just 57%, the lowest rate seen since 1988, an analysis from the National Women’s Law Center found.

But although COVID has certainly exacerbated many of the problems within America’s child care system, parents struggled to find affordable child care even before the pandemic. And a lack of affordable child care can leave families — and women in particular — grappling with far-reaching economic consequences long after the child has begun school.

“Parents are paying more than they can afford. Providers are not being paid enough,” a new report from Columbia University’s Center on Poverty and Social Policy and the National Women’s Law Center read. “In short, the lack of public investment in care infrastructure is one important reason that women — as both paid child care providers and mothers — bring home less pay, experience higher poverty rates than men at every stage of life, and are less secure in retirement.”

Providing everyone who needs it with access to affordable high-quality child care from birth to age 13, an idea commonly known as universal child care, would have serious long-term benefits to women and families, and may even help narrow the gender wage gap. According to the National Women’s Law Center, research has already shown that universal child care not only enables more women to join the workforce and work more hours (full-time as opposed to part-time) but also enables parents to maintain higher-paying jobs. Their latest report found access to affordable and reliable child care could result in a 17% increase in women’s full-time participation in the U.S. labor force.

But universal child care doesn’t just mean more women in the labor force. It means more money in more women’s pockets. According to the report, universal child care would boost the collective lifetime earnings of 1.3 million women by $130 billion. With access to universal child care, the average mother of two would ultimately see her earnings increase by $97,000 over her lifetime. And much of that gain would occur in the woman’s 30s and 40s, the decades she’s most likely to be having and raising children.

By the time that mother of two reached retirement age, she’d be estimated to have an additional $10,000 in Social Security benefits and an extra $20,000 in private retirement savings. Black mothers living in poverty would benefit the most as access to universal child care would increase their lifetime earnings by $108,000, according to the report.

Even this is just the beginning of universal child care’s benefits, the report argued. “Child care carries a lifetime worth of benefits,” the report from Columbia University and the National Women’s Law Center read. “More children will have access to high-quality settings and fewer children will experience poverty — resulting in better outcomes for their health, education, and earnings as adults. More women will be able to enter the workforce or work more hours, boosting their income throughout their lives and enhancing their financial security in retirement.”

But the question remains: Can the United States adopt universal child care before even more women are forced out of the labor force for good?