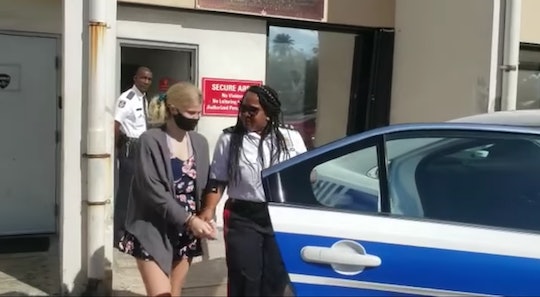 U.S. Teen Jailed In The Caymans Gets Shortened Sentence

She was sent to prison after breaking COVID-19 protocol.

In the Cayman Islands, failing to follow mandates established to slow the spread of the novel coronavirus came with a steep price for one 18-year-old U.S. college student. A Georgia teen was imprisoned for breaking COVID protocols after traveling to the British Overseas Territory and failing to properly isolate.

Although originally sentenced to four months in jail, an appeals court cut Skylar Mack's sentence in half on Tuesday. An attorney for Skylar Mack, a pre-med student studying at Mercer University in Macon, Georgia, told the Associated Press the teen had traveled to the Cayman Islands in late November to watch her boyfriend, 24-year-old Vanjae Ramgeet compete in a jet-ski competition. Although COVID regulations set forth by the Cayman Islands require tourists like Mack to undergo a mandatory two-week quarantine, the teen removed the electronic tracking bracelet assigned to her by the British Caribbean territory and broke quarantine after just two days in order to attend her boyfriend's event.

Mack's grandmother told CNN, her granddaughter had taken two COVID-19 tests — one at home before her trip and another after landing — both of which came back negative. "In her mind, as long as she stayed away from everybody, she would be OK to go watch her friend's race," Jeanne Mack told the cable news outlet.

But according to People, Mack didn't stay away from others. Both Mack and her boyfriend were reported to have interacted with multiple other people at the event while not wearing masks or social distancing. Event attendees who knew Mack ultimately reported her for violating isolation, leading to her and Ramgeet's arrest, according to local paper the Cayman Compass.

Both Mack and Ramgeet plead guilty to one count of failing to comply with COVID-19 regulations and Mack was initially ordered to pay a $2,600 fine and complete 40 hours of community service in early December, the Cayman Compass reported. However, shortly after the ruling, Director of Public Prosecutions Patrick Moran moved to appeal the original sentence, telling the court it was too lenient and would do little to deter others from following Mack's lead. "These offenses should have been met with far more stringent measures,” the paper reported Moran told the court upon appeal. “When it comes to a matter of deterrence, the sentences imposed are likely to have little to no effect on other like-minded individuals.”

As a result of Moran's appeal, a judge upgraded both Mack and Ramgeet's sentences to four months in jail last week. In a statement given to the Atlanta Journal-Constitution, an attorney representing the couple questioned the new sentence. "There is no way that it can be right that a custodial sentence is imposed for a first-time offense on an 18-year-old defendant, who entered an early guilty plea,” the paper reported Jonathan Hughes said, attributing Mack and Ramgeet's actions to “youthful ignorance and selfishness.”

Hughes told NBC he feared the jail sentence was likely to have "a particularly harsh effect" on Mack, who was due back at school in January. At the time of her sentencing, Mack's family reached out to President Donald Trump for help, the news agency reported.

Reactions to Mack's upgraded sentence were mixed. While some have called the prison sentence "inhumane," others on social media have said the teen's behavior was particularly disappointing for a pre-med student. "You'd think that a pre-med student would have a bit of a brain," one Twitter user wrote. "I guess not."

Mack, meanwhile, has apologized in a statement distributed to the Atlanta Journal-Constitution and the Cayman Compass by her lawyer. “I am aware that the Cayman Islands Government has done nothing but dedicate extreme caution to combat the spread of COVID-19, for this the country and its citizens can be extremely proud," the teen's statement read. "I made a mistake, and words cannot express how sorry I am for this… I was afforded the opportunity to enter the islands during these trying times and I abused it. I am humbly asking for the forgiveness of the community.”

The Georgia teen moved to appeal the sentence earlier this week, appearing before a panel of judges on Tuesday who ultimately reduced her sentence from four months in jail to two months. In a statement provided to CBS News, Hughes said Mack had accepted the judges' decision even though the reduced sentence wasn't the exact outcome they were hoping for. "Whilst it was our hope that Skylar would be able to return home to resume her studies in January, we accept the decision of the court," CBS News reported Hughes said. Ramgeet's jail sentence has also been reduced to two months.

This article was originally published on Dec. 21, 2020