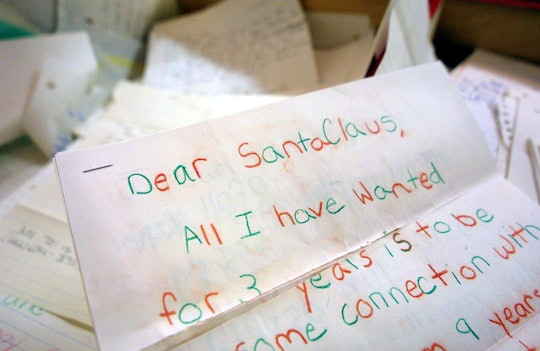 Here’s everything you need to know about how kids can write to Santa Claus and how families can help make other children’s wishes come true this holiday season.

The United States Postal Service (USPS) has kicked off its annual Operation Santa program for 2021, meaning Santa is officially accepting letters. For more than 100 years, the USPS has, with the help of kind citizens, responded to letters addressed to Santa Claus under its Operation Santa program. Over the years, the program has morphed into a way for generous givers to “adopt” letters to Santa and help children and families in need experience a bit of holiday cheer. But families looking to participate in the program may want to get their letter in the mail sooner rather than later.

What Is Operation Santa?

Operation Santa began unofficially in 1912 when Postmaster General Frank Hitchcock gave local postmasters permission to have postal employees and citizens respond to any letters the postal service received that were addressed to Santa Claus. In the 1940s, the postal service began receiving an overwhelming amount of letters for Santa and invited charitable organizations and corporations looking to participate in philanthropic activities to help provide both written responses and small gifts to letter writers.

In 2017, the postal service tested a digital Operation Santa program in New York City, enabling local residents and families to “adopt” a letter sent to Santa under the program. In “adopting” a letter, the adopter commits to responding to the letter writer and fulfilling the letter writer’s gift wish when possible. The digital program expanded the following year to include another eight cities before going nationwide in 2020.

While USPS’ Operation Santa program looks a bit different today compared to how it looked in 1912, the spirit of the program remains unchanged: to assist families who might need a little extra help experience a magical holiday season. Letter writers still mail their letters to Santa through the postal service. Personal and identifying information is redacted and the letters are published online where volunteers can “adopt” and fulfill them.

How Do You Send A Letter Using Operation Santa?

To get a letter to Santa through USPS’ Operation Santa, children will need to print their full name and return address on the upper left corner of their envelope and affix a first-class mail stamp in the upper right corner. Letters should be addressed to:

As for what to write, the postal service recommends giving Santa a brief but honest recount of your year and including any necessary information about sizing or preferred colors and styles in requests for clothing and shoes. Requests for toys and books should include the item’s full name or title if children are hoping for something specific or a note about what kind of things interest them if placing a more general request. Additionally, letter writers must include a full and complete return mailing address to ensure Santa can get them their gifts.

Is There A Deadline To Send Letters?

Due to Santa’s busy schedule, letters sent to Operation Santa must be postmarked no later than Dec. 10, according to USPS. This ensures USPS has enough time to place letters online for adoption and that those looking to fulfill a letter have enough time to shop and send.

How Late Can Operation Santa Letters Be Adopted?

USPS will post letters as they arrive on the official Operation Santa website. As of Nov. 2, because the program has only just kicked off, no 2021 letters have been posted. However, letters are expected to begin trickling in soon. Letters can be “adopted” under the Operation Santa program until as late as Dec. 15.

What If Your Child Doesn’t Need Gifts, But Would Still Like A Letter From Santa?

Parents of children who don’t need volunteers to help fulfill their Christmas wishes, but whose child would still like to write to Santa and receive a response can use the postal service’s “Greetings From The North Pole Post Office” program. To participate, parents will need to place their child’s letter to Santa in an envelope addressed to Santa Claus at the North Pole and, separately, write a personalized response to their child’s letter from Santa (be sure to sign this letter “From Santa!”). This letter should then be placed in a stamped envelope addressed to their child with a return address of “Santa, North Pole.” Both envelopes should then be placed in a larger stamped envelope and addressed to:

More Like This
These Patriotic Puns Are Perfect For The 4th Of July
Adorable Fireworks Crafts To Celebrate The Fourth
Can You Light Fireworks In Your Backyard?
15 Fun & Historical 4th Of July Facts To Share With Your Kids