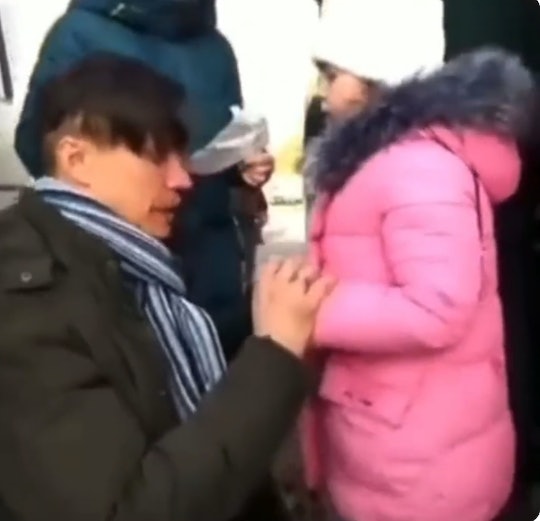 The emotional video captures a reality faced by many Ukrainian families as Russia invades the country.

For weeks, Ukrainians have lived under the looming threat of an invasion from Russia and, early in the morning on Feb. 24, Russia began shelling the country, including the capital city of Kyiv. As politicians and observers fret and fume about the geopolitical ramifications of these events, a viral video of a Ukrainian father saying goodbye to his daughter has given social media a glimpse into the heartbreaking emotional realities of this invasion.

The video shows a man hugging a little girl, gently adjusting her white knit cap before crumpling before her and crying into her bright pink coat. She, too, begins to cry. He, the girl, and a woman embrace, crying. After she has boarded the bus, presumably to a safer location, he puts his hand to the window. The woman (identified by her teal colored coat) can be seen touching his hand through the window as the girl turns to do the same. A longer version of the video, shared by YouTube channel Global News Agency shows the father first breaking down into tears when he looks at what appears to be a drawing or note from the girl.

The moving scene has been shared on Twitter, Reddit, and across various English language news outlets, mostly identifying the man in the video as the girl’s father who is staying behind to fight while his family moves to a safer location.

It’s important to note — in this era of misinformation — that this video has not been independently verified, either by Romper or, seemingly, any major news outlet. We do not know if this man is indeed the girl’s father, or if they are in fact even in Ukraine. However, the situation captures a reality journalists have been observing on the ground and over the past few weeks as Ukrainians prepared themselves for the possibility of an invasion.

In January, NPR reported that thousands of Ukrainian civilians were training for a possible Russian invasion, learning urban guerrilla tactics, basic medical training, and more to defend their homes. Danielle Campoamor of Today Parents reported of Ukrainian parents sending their children to school with stickers listing their contact information and blood type at the schools’ behest. This is a country that has understood what an invasion would look like: what it would mean and what it would require of everyday citizens to fight back. But that certainly doesn’t make it easier to face when that day, sadly, arrives.

To donate to causes that will support the people of Ukraine, visit the Come Back Alive Foundation; Army SOS; or the International Red Cross.