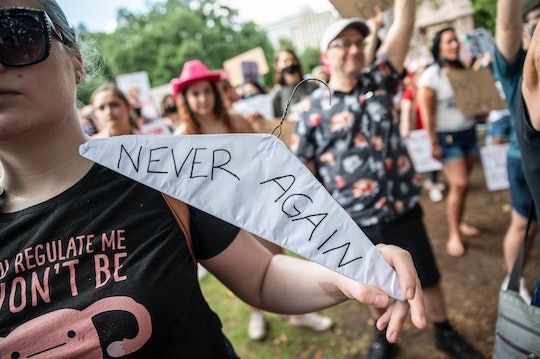 A controversial Texas law banning abortions at just six weeks — well before many women are even aware they are pregnant — took effect Wednesday after the U.S. Supreme Court failed to act on emergency appeals brought forth by reproductive rights advocates and abortion providers in the state. But as writer Lucy Huber noted in a series of viral tweets, Texas’ law will function as a near-total abortion ban for the many women who don’t learn they are pregnant until six weeks after their last menstrual cycle.

“To illustrate how insane a six-week abortion ban is: I did IVF and still did not know I was pregnant until 4.5 weeks,” Huber tweeted early Wednesday. “That's LITERALLY as early as you can possibly know and that's when you are PAYING someone to put an embryo in your body on a specific day and keep track of it.”

SB8 is without a doubt one of the strictest abortion bans in the country. Under the law, abortion providers “may not knowingly perform or induce an abortion on a pregnant woman” if “cardiac activity or the steady and repetitive rhythmic contraction of the fetal heart within the gestational sac” can be detected. Such activity is usually detectable around five and a half to six weeks after the pregnant person’s last period — or roughly two weeks after a missed period. While the law does allow for exemptions in situations of medical emergencies, it does not make exemptions for cases of rape or incest.

What makes Texas’ ban different from other laws attempting to ban abortion as soon as cardiac activity is detected is that it leaves enforcement of the law up to private individuals. Under the law, individuals are encouraged to sue abortion providers as well as any individual found to have aided a patient in securing abortion care after six weeks. Those who bring forth a successful lawsuit will be awarded $10,000.

“People are often surprised I got an ultrasound at five weeks because ALMOST NOBODY BUT IVF PATIENTS GETS THEM,” Huber tweeted Wednesday in an effort to drive home how rare it is to confirm a pregnancy before six weeks. “Most people aren't even seen by their OBGYN before six to eight weeks. So even if people COULD manage to find out they were pregnant at the first possible minute and schedule an abortion in less than two weeks, they would have to do so without even going to their own doctor and just having done a stick test.”

“But obviously, this is the point, right?” Huber continued. “A six-week abortion ban is a total abortion ban, because pretty much the only people who could reasonably get an abortion are people who very much want to be pregnant.”

But even if a person discovered they were pregnant at five weeks or even four and a half, general appointment wait times combined with the 24-hour waiting period Texas law mandates for all abortions could still prevent them from being able to secure an abortion before six weeks. In fact, the American Civil Liberties Union (ACLU), which joined Planned Parenthood and the Center for Reproductive Rights last month in filing an emergency request asking the Supreme Court to block SB8, has noted that somewhere between 85% to 90% of people who obtain abortions in Texas are at least six weeks along in their pregnancy when they do so.

Under Texas’ new law, none of those patients would be legally able to secure an abortion without now having to travel across state lines. “Meaning this law would prohibit nearly all abortions in the state,” the ACLU concluded.