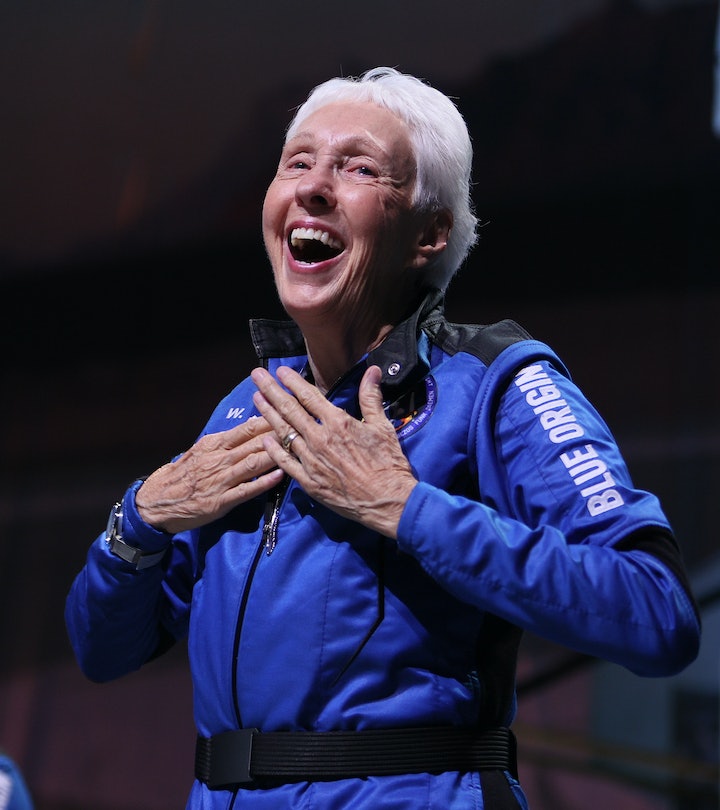 Wally Funk Finally Went To Space After Being Told "You’re A Girl, You Can’t Do That"

“She is America’s new sweetheart.”

Roughly 59 years after sexism ended her early efforts to become an astronaut, 82-year-old Mary Wallace “Wally” Funk made history Tuesday when she became the oldest person to ever fly into space. Funk joined Amazon founder Jeff Bezos on his first suborbital flight with his private spaceflight company Blue Origin, effectively fulfilling a lifelong dream and taking the title of the oldest person in space from a man whose sexist attitude helped cut her dreams of spaceflight short in the 1960s.

“I’ve been waiting a long time to finally get up there,” Funk said in a post-spaceflight press conference. “I loved it... I want to go again, fast!”

Although Funk blasted off on a ten-minute suborbital flight thanks to an invitation from Bezos, her journey into space actually began three years before Bezos was even born. In 1961, at the age of 21, Funk became the youngest member of the Mercury 13, a group of 13 women selected to undergo training and testing similar to that of NASA astronauts — all of whom had been men at that point — in a program spearheaded by Dr. William Randolph Lovelace II.

But opposition from then-Vice President Lyndon B. Johnson and a lack of support from NASA, resulted in the final phase of testing for the Mercury 13 women being abruptly canceled in 1962, according to the Houston Chronicle. When Mercury 13 members attempted to advocate for themselves, Smithsonian Magazine reported a Congressional subcommittee on the Selection of Astronauts of the House Committee on Science and Astronautics was formed, which heard testimony from, among others, astronaut John Glenn.

Glenn argued men were best qualified for spaceflight as only they could have military pilot experience given that particular career path was not open to women at that time. “The men go off and fight the wars and fly the airplanes and come back and help design and build and test them,” Glenn said in his testimony, according to Smithsonian Magazine. “The fact that women are not in this field is a fact of our social order.”

Until Funk’s historic spaceflight on Tuesday, Glenn held the record as being the oldest person to fly into space after completing a nine-day mission in 1998 at the age of 77, History.com reported.

Funk’s never-give-up spirit and unbridled enthusiasm have made her something of an instant icon, garnering praise from even the White House. “Wally Funk is now on my list of people that I would most like to meet in the country,” Reuters reported White House Press Secretary Jen Psaki told reporters during a Tuesday media briefing. “She is America’s new sweetheart.”

For mothers like KHOU 11 anchor Rekha Muddaraj, Funk’s moment served as an excellent lesson in inspiration and grit for young girls. “Couldn't take my eyes off the launch,” Muddaraj tweeted. “Woke up my 9 & 6yo daughters to watch, specifically to explain pioneer Wally Funk's long journey to space. ‘Go for everything you can. Higher. Faster. Longer.’”

Speaking in a video shared by Bezos ahead of Tuesday’s flight, Funk reflected on her nearly 60-year journey. “They told me I had done better and completed the work faster than any of the guys,” she said f her Mercury 13 training. “So, I got a hold of NASA — four times I said, ‘I want to become an astronaut.’ But nobody would take me. I didn’t think that I would ever get to go up.”

But perseverance paid off for Funk, who, according to TIME, is also the first female air-safety investigator for the National Transportation Safety Board (NTSB) and the first female inspector for the Federal Aviation Administration (FAA). “Nothing has ever gotten in my way,” she said in Bezos’ video. “They said, ‘Wally you’re a girl, you can’t do that.’ I said, ‘Guess what? Doesn’t matter what you are, you can still do it if you want to do it.’ And I like to do things that nobody has ever done.”